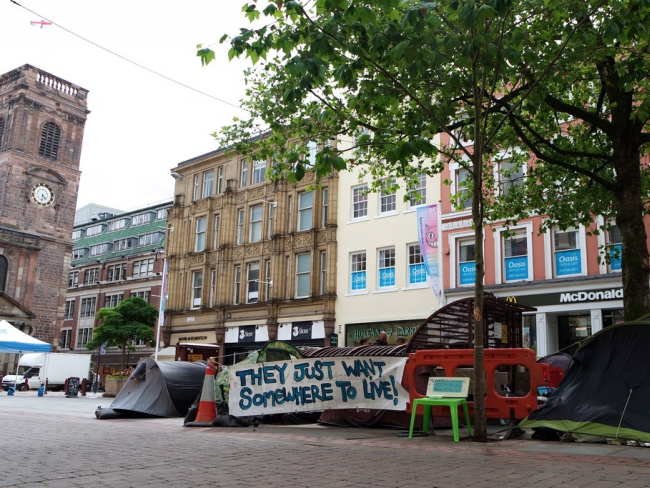 The housing crisis sweeping Britain shows no sign of abating. Its effects are to be found all over the country, not least in the much-vaunted “Northern powerhouse” of Manchester. At the start of December 2019 Shelter, the national housing charity, published figures that show one in 47 children in Manchester is now homeless.

In November 2019 the Manchester Evening News reported on a “deepening crisis” in the city, with six families a day being placed in temporary accommodation as “hidden homelessness” becomes an increasingly serious problem.

Manchester City Council, the paper revealed, is housing 411 per cent more homeless families in temporary accommodation than in 2015, with one council official describing demand on the city’s homeless service as “staggering.”

Council spending on hotels and temporary accommodation is up from just under £3 million a year to a projected £19 million this year, while changes to the government funding formula are leaving the city with a £3.5 million grant shortfall.

The most common cause of homelessness for families is the loss of a private rented home as a result of the landlord increasing the rent beyond what the family can afford.

In the face of these alarming figures, many people in Manchester question why so many upmarket apartments are being constructed, many with public money.  In 2014, the Greater Manchester local authorities did a deal with George Osborne as part of the “devolution” of responsibilities.

A £300 million recyclable loan fund was set up to kick start housing on former industrial land across the region. But it turns out that some schemes in Manchester city centre have benefited from this fund. In 2017 the Manchester Evening News reported that one scheme, given a £43 million loan by the city council, has been marketing “exclusive apartments” in Hong Kong’s South China Post at “early bird rates”.

House prices are rising rapidly, particularly in the city centre, and these are matched by rising rents. Investors are looking at Manchester as an alternative to London. This has created a problem, not only for families forced out by higher rents, but also for many young first time buyers keen to buy in to city centre living.

To make matters worse, the vast majority of schemes developed or in the pipeline in the city centre have been allowed to proceed without any promise of affordable housing.  Only in the last couple of years, following pressure from campaigners such as Greater Manchester Housing Action and some back bench councillors, has the council used its Section 106 powers (under the Town and Country Planning Act 1990) to require developers to factor in affordable housing.

Yet an assessment of new successful planning applications shows a failure to achieve the council’s 20 per cent policy target and that almost none of the affordable housing is being included in new city centre schemes.

Manchester has a homeless crisis and the cause of that does not rest at its own front door. But the council’s eagerness to embrace foreign capital looking for a lucrative home leaves its response to its own citizens sadly lacking.

Devolution has failed, too. The devolved housing budget has solved little for Manchester residents and does even less for a national response to the housing crisis.

The situation in Manchester is not on par with the financial corruption of local government in the 1960s but there is corruption of political thought that results in such stark contrasts of housing provision (or lack of it) in its own city.

Profit and the housing shortage
A community's fight against buy-to-let profiteers
Housing: Overcrowding doubles
Housing: New starts down
The big opportunity for homes fit for workers