The Earth and the Sun - shorter version 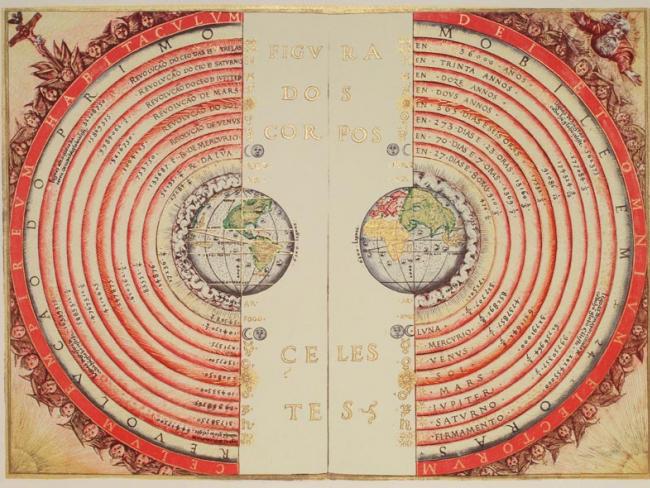 How the Earth used to be viewed: an illustration by Portuguese cartographer Bartolomeu Velho, now in the National Library in Paris.

In the late 16th and early 17th centuries two men helped to cast out ancient ideas about physics and astronomy. Their work laid the foundation for modern scientific understanding.

Copernicus (1473-1543) was a Renaissance mathematician and astronomer, who studied astronomy and maths at Krakow University and obtained a doctorate in church law. After studying medicine at Padua University, and practising it for nearly half a century, he spent his last decades at Warmia (now in northern Poland) observing and developing his theories on astronomy.

His central theory was that the earth rotates daily on its axis and revolves yearly around the Sun as do the other planets. This was a heliocentric, “sun-centred” system (from the Greek word helios meaning “sun”). It challenged the long-held opinion that the Earth was stationary at the centre of the universe with all the planets, the Moon and the Sun rotating around it.

Copernicus probably discovered his main idea sometime between 1508 and 1514, when he wrote a manuscript entitled the Commentariolus (meaning “Little Commentary”). Even though the final version of his theory, On the revolutions of the Celestial Spheres, was essentially finished by 1532, the book did not appear in print until 1543, the year of his death.

A heliocentric system went against the accepted view of his day. Copernicus tentatively shared his ideas in Commentariolus with selected friends. He continued to think, recalculate and gradually develop the treatise that would fundamentally revise the understanding of cosmology and physics held since classical Greek times.

Copernicus delayed publication, possibly fearing academic and religious opposition, and waited 30 years to issue the mature, evidentially-rounded version of his heliocentric theory. It was published in 1543 in the receptive town of Nuremberg, a centre of business, finance, enterprise and technology. Interestingly, no one was punished or threatened; his book was read in universities across Europe. A second edition appeared in 1566. His treatise was not proscribed, probably because it included lots of maths and he wrote it in Latin. There was no posthumous proclamation of Copernicus as a heretic; no hunting down or punishing of those who agreed with him.

The church was slow to condemn Copernicus’s ideas. Heliocentricism was even being lectured upon in Rome by the Papal Secretary when Pope Clement VII (1523-34) was part of the audience. Copernicus’s heliocentric theory only became a matter of theological contention with the warning given to Galileo in 1616, 73 years after its original publication.

To the traditionalists, however, the heliocentric system seemed to be absurd and contrary to common sense, as the earth did not appear to be flying through space and spinning on its axis as well. Copernicus’s theory was a challenge to two thousand years of physical science, represented by the philosophy of Aristotle and medieval logical analyses of motion.

The test of Copernicus’s theory lay not in brilliant rhetoric or philosophical argument, but in empirical observations. He made copious measurements of the exact angular position of astronomical bodies, undertaken with instruments of increasing accuracy. Copernicus’s development of a heliocentric theory of the cosmos arose from a desire to make sense of the universe and to devise coherent explanations for the movement of the planets. Philosophers in the classical tradition did not for the most part understand the need to match theories and observation.

Born 21 years after Copernicus’s death, Galileo Galilei (1564-1642) was an astronomer, mathematician, philosopher, physicist and engineer. Considered the father of modern science by many, including Albert Einstein and Stephen Hawking, he is renowned for his studies on the laws of motion and for many scientific discoveries. These include the telescopic confirmation of the phases of Venus (which validated Copernicus’s theory), the discovery of the four largest satellites of Jupiter, and the observation and analysis of sunspots.

Starting a medical degree at Pisa University, he quickly found it was not to his taste and studied mathematics and natural philosophy instead. In 1589 he became professor of mathematics. From 1592 to 1610 he taught geometry, mechanics and astronomy at Padua University, which at the time was not only Italy’s but probably Europe’s top university for scientific and medical subjects.

‘Copernicus’s theory was a challenge to two thousand years of physical science.’

Galileo pioneered not only the development of the telescope as an astronomical instrument, but also an early microscope – and was amazed at the complex beauty of insects. His Starry Messenger (1610) was the first published scientific treatise to be based on observations made with a telescope. He exploited the international acclaim which his 1610 telescopic discoveries brought him to secure a prestigious appointment at the court of the Grand Duke of Tuscany.

In 1614, Galileo was accused by the Catholic Church of heresy for his support of the Copernican theory that the Sun was at the centre of the solar system. In 1616, the church banned him from teaching or advocating these theories. He was again condemned for heresy in 1632 for defending his views and the Copernican theory in his book Dialogue Concerning the Two Chief World Systems.

Galileo was summoned to appear before the Inquisition in Rome. He was convicted, forced to recant and publicly withdraw his support for Copernican theory. He was sentenced to life imprisonment, later reduced to permanent house arrest which remained the situation until his death.

For the church, Galileo’s main fault was not to argue for his idea (which was not unusual and often tolerated within learned confines) but to publish his work in everyday Italian, so that non-scholars could read it. As the ruling classes have always realised, ideas become a material force once they are grasped by the mass of people, and a danger to ruling class power.

Though going blind, Galileo continued to write and, in 1638, published his Discourses Concerning Two New Sciences explaining his ideas on the laws of motion and the principles of mechanics.

Galileo had a gift for pure mathematics and applied and mechanical engineering design. Evidently he was a skilled practical operator, good with his hands, at home in the worlds of university academic and practical mathematician, with one foot firmly planted in the world of the tradesman and skilled artisan. He also worked in applied science and technology, inventing instruments.

His work replaced old, untested ideas about motion with objective, verifiable mathematical descriptions. This laid the foundations for the revolution in scientific understanding led by Isaac Newton (born the year Galileo died).

Galileo’s approach to all aspects of physics and astronomy was to experiment and observe first, theorise second, and then to describe this mathematically. Galileo epitomised a new approach to understanding the natural world, by the use of controlled experimental conditions, investigating a small part of nature in the hope of gaining insight into the whole.

Though both Copernicus and Galileo probably deserve the title of genius, they were not special figures who grasped the truth while the rest floundered in ignorance. Rather, they flourished in an environment increasingly conducive to breakthroughs in knowledge. They benefited from a European tradition of improving technology that went back to the eleventh century.

Though both Copernicus and Galileo undoubtedly had great minds, crucially they had perceptive eyes, dexterous hands and a distinct practical bent which got the most out of the technology of their scientific instruments. As their scientific ideas took hold, many ancient cultural beliefs such as astrology and alchemy bit the dust and essentially the modern world began.

Minerals and the future: the new dig for Britain
The genius of Michael Faraday
Science, technology and progress
Society and the Sun
The Earth and the Sun