The genius of Michael Faraday 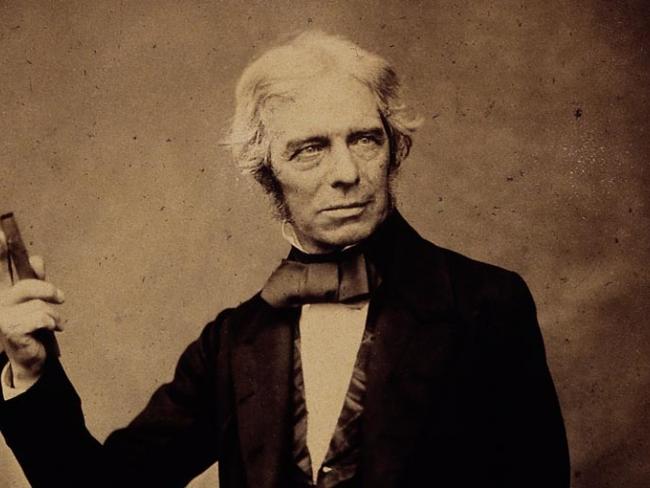 Michael Faraday was born in London, the son of a blacksmith. Through his brilliant, enquiring and persistent approach he became one of the greatest and most influential scientists ever.

Faraday spent his working life at the Royal Institution, for many years as director of its laboratory and professor of chemistry. He came to science through books and lectures and he valued scientific education. Early on, he founded the celebrated RI Christmas Lectures , still running today.

Apprenticed as a bookbinder, Faraday had an inquisitive mind. He was largely self educated, taking the opportunity to read the books he handled. His interest in science led him to attend lectures by Humphry Davy, the most famous scientist of the day. Davy was looking for an assistant at the RI; he appointed Faraday, impressed by his notes of the lectures.

Although later Davy became jealous of Faraday, blocking his election to the Royal Society, he was at first generous and open to his assistant. Faraday was involved with and shared in the development of the famous Davy miners’ safety lamp , the invention of which has saved so many lives.

The scale of Faraday’s achievements is probably unparalleled. In effect he created the sciences of electrochemistry and electromagnetism, and was a pioneer in other areas such as optics. Many of his discoveries led to practical applications in his lifetime. Other work laid the theoretical foundations for the revolution in physics of James Clerk Maxwell and later Albert Einstein. Both recognised and celebrated Faraday’s contribution.

‘Faraday put his scientific ability into practical service in many ways…’

One of the early tasks Davy set Faraday was to investigate the discovery by the Danish scientist Hans Øersted in 1820 that an electric current could deflect a compass needle. Typically Faraday built and tested apparatus to understand exactly what was going on.

Others were bemused by the phenomenon, but did not make the same leap as Faraday. He passed a current through a wire suspended beside a magnet and saw that it made the wire move. This discovery, sensational at the time, is the principle of the electric motor.

Faraday invented and improved scientific equipment, including a forerunner to the Bunsen burner, and some of his important work was directly applicable, but he was far more than an empirical technician.

At the time of his first motor experiments, Faraday was already thinking that the magnet exerted force through a field around it. He carried out further investigation into electromagnetic properties. That gave him the insight for an experiment in 1831 showing how an electric current in one wire could create a current in an adjacent wire – electromagnetic induction.

He followed this up with other experiments – moving a magnet through a wire coil or passing a wire coil over a magnet both generated electricity. It’s hard to overestimate the significance of that breakthrough.

The discovery opened the way to generate electricity, previously only available from batteries, and enabled the practical use of electric motors for power. Faraday himself saw the implications, building the first electrical generator soon after.

Faraday contributed many more experimental and theoretical insights into electricity. He showed that static electricity and electrical impulses in animal nerves were part of the same phenomenon as electricity from a battery.

His demonstration that electrical charge is only on the surface of a conductor helped to explain that electricity was a force and not a fluid – and gave rise to the Faraday cage, which blocks electromagnetic fields. He built and tested the first one himself.

Faraday used iron filings to show the force field around a magnet, familiar now to generations of schoolchildren. He correctly theorised that an electromagnetic field surrounded all conductors. Not widely accepted until after his death, this is one of the key steps in understanding and harnessing electromagnetism.

All along Faraday was curious – patiently testing and theorising about what he saw in a wide range of chemical and physical phenomena. For example his work in electrochemistry, the study of the interaction of electrical charge with chemical change, developed quantitative laws and pioneered the development of efficient batteries.

Faraday wanted to share his ideas in an understandable and inspiring way. He gave many of the RI Christmas lectures himself. One of the most famous was in 1848, ” The Chemical History of a Candle ”. In six lectures, with demonstrations (some of which he suggested could be performed at home), he explains the light from the candle, combustion, the production of water and CO2, the composition of air and how respiration in animals is chemically similar.

Faraday transformed the knowledge and application of chemistry and physics through experiment, discovery and theory.

And Faraday put his scientific ability into practical service in many ways. One, echoing his early work with Davy on the safety lamp, was an investigation into a serious, fatal mine explosion at Haswell Colliery, County Durham, in 1844. With geologist Charles Lyell, Faraday made a systematic study, concluding that coal dust was a major cause, the first time dust was linked to explosions. He also showed how ventilation could reduce the risk.

But it took nearly 60 years for mine owners to act on those lessons.