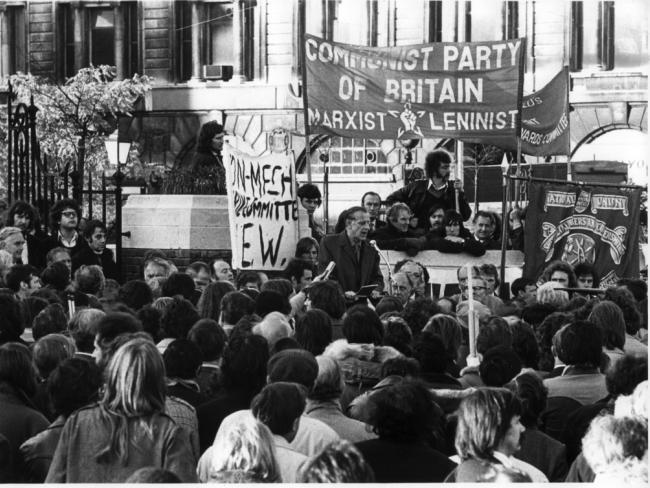 If properly focused, the power of an organised working class is overwhelming, as was the case with the engineers’ struggle in the 1970s that demolished the anti-trade union act

On coming to power in 1970, the first thing the Conservative government did was to try to rush through an anti-trade union bill. Labour’s White Paper In Place of Strife in 1969 had been a debacle, completely failing in its aim of limiting union activity. Heath, the new prime minister, wanted to outdo Wilson and show he could tame the working class.

The Conservative bill posed a fundamental challenge to trade unions. Threatening their effectiveness, it called for state registration of unions. Strikes would become illegal if they were unofficial or were solidarity action. Unions would lose immunity from being sued by employers in the civil courts if they were not state registered.

The bill sought the introduction of postal ballots, cooling-off periods before strikes, the outlawing of closed shops and tighter controls of union agreements and membership. A new court would be created with punitive powers to impose fines on unions and order sequestration of their assets. This was a head-on attack.

The capitalist class was in trouble. Whereas employers had been able to live with trade unions, even if they found them a thorn in their flesh, now they were demanding state intervention to crush them. Our Party pointed out the dangers of a corporate state and warned that only great determination and positive action would stop the bill.

Typically the TUC responded with a phoney war and intended no action as the Industrial Relations Bill progressed through parliament. The TUC limply called for meetings in tea breaks and outside working hours in January 1971. It was clear they were going to accept the bill, under weak protest.

Pockets of unofficial strike action against the bill occurred on 8 December 1970 and 12 January 1971. But then, breaking with the passivity of other trade union leaderships, the Executive Council of the Amalgamated Engineering Workers Union (AUEW) voted to lead their million and a half members into industrial action against the bill with two national one-day strikes in March.

The AUEW declared that, if the bill became law, it would adopt a policy of non-cooperation with the act and its court. The AUEW National Committee, the union’s lay authority, affirmed this stance; it voted decisively for a series of one-day strikes.

Over a million workers stopped work on 1 March 1971. On the 18 March over 2 million workers went on strike. The effect on the economy was immense. More than 80 per cent of Engineering Employers Federation members were affected. The motor industry, docks, and newspapers were completely closed down. In addition, engineering workers in the gas, water and electricity supply industries were on strike.

The example spread as many other workers outside of the AUEW joined the strikes, including boilermakers, printers, electricians and postmen. Attempting to throw a restrictive net around our working class, the ruling class had provoked the engineers to openly break their class law with an unprecedented level of purpose. It was a political battle.

A TUC special conference on 18 March adopted a seven-point programme of inaction which scraped through by a narrow 5 million to 4 million vote. The dead hands only dreamed of watering down the bill in parliamentary debate or finding legal loopholes. They were waiting for repeal by a different government, amounting to defeatism and acceptance of the Act. It reached the statute book in August 1971, though its anti-strike provisions did not come into force until 28 February 1972.

But the engineers’ approach was based on the power of workers, on their ability to withdraw their labour and thereby to bring the entire capitalist system to a halt. At the September 1971 TUC the AUEW put a motion, which “instructed” all trade unions not to register under the Act, threatening those that did with expulsion. This was passed by 5,625,000 votes to 4,500,000. 82 TUC affiliated unions deregistered, though 32 middling to small unions were expelled. In practice, however, only the AUEW actually repudiated Heath's Act and refused to acknowledge the existence of the National Industrial Relations Court (NIRC).

Threatened industrial action by railway workers provided the Act’s first real test. In April 1972, the National Union of Railwaymen rejected a pay recommendation and imposed a work-to-rule and overtime ban. The Secretary of State for Employment activated the statutory 14-day cooling-off period. The NUR refused to attend the NIRC, in line with TUC policy, but adhered to the cooling-off period ordered by the court. At the end of the 14 days, the NIRC ordered a secret ballot. The result was 88 percent of members supporting the union’s proposed action. The dispute was settled with a wage increase. Heath’s government never again attempted to use the cooling-off and ballot provisions of the 1971 act.

The next clash came when two container companies at Chobham Farm, east London, being picketed by dockers on unofficial strike, applied to the NIRC in July 1972 for an injunction against them. The court found in the employers’ favour, ordering the arrest and jailing of five pickets in July 1972.

The Pentonville Five became an instant cause célèbre, named after the London jail where they were imprisoned. There were large-scale unofficial stoppages of work in protest, including a docks strike. The TUC voted to stage a one-day general strike on 31 July. That was not necessary as a fearful government caved in. Following a protest march on Pentonville, a desperate legal loophole was instigated by the Official Solicitor (a crown officer few had ever heard of).

“We do not take orders from judges.”

The five men were released within a week of their imprisonment, even though they had publicly accepted they were picketing. They returned to the picket line on gaining their freedom. One of their shop stewards said, “We do not take orders from judges.”

The Transport and General Workers Union tried to be militant without penalties. Sued as responsible for their own shop stewards, the TGWU repudiated them. It cooperated with the NIRC and appealed to the House of Lords, but was still found responsible.

A very minor issue created the next flashpoint. An individual, James Goad, appealed to NIRC to be allowed to become an AUEW member. He had failed to pay subscriptions on three separate occasions and been excluded from the union. The union refused to acknowledge the court. On 20 December 1972 there was a national AUEW stoppage against the £5,000 fine plus £50,000 for contempt imposed on the union by the NIRC.

The AEUW was fined again soon after. In September 1973 the NIRC became involved with a strike and picketing by AUEW members in a recognition dispute at a small engineering firm called Con Mech. An order banned the strike while an investigation was carried out. The AUEW ignored this and was fined £75,000 for contempt; £100,000 of the union’s assets were sequestrated.

On 1 May 1973 the AUEW had organised guerrilla strikes at factory level against the Tory government wage freeze. By February 1974, the incoming Labour government launched the self-emasculation of the Social Contract to cut back real wages by getting workers to exercise voluntary pay restraint. Everything was to be coordinated by the government and the TUC, involving individual trade unions. In April 1974 the AUEW launched an overtime ban against the Social Contract, followed by strikes in May.

The miners won a victory over the Tory government, which was defeated in the “who rules Britain?” election of February 1974. But unsurprisingly the new Labour government did not repeal the offending legislation. The whole apparatus of Heath’s Industrial Relations Act was left in place. Worse, the NIRC continued to crucify the AUEW with punitive fines and costs arising from the Con Mech case. That brought about the final showdown.

Con Mech applied to the NIRC to sue the union for damages, and in April 1974 it was awarded £47,000 compensation. The AUEW refused to pay. The court ordered the seizure of all the union’s assets. The AUEW executive council declared that the sequestration of its union funds meant “all members of the engineering section without exception should withdraw their labour forthwith.” The instruction was issued for 8 May, without any end date.

The response from AUEW members was truly remarkable. Up and down the country engineers immediately downed tools. Whole sections even stopped on the night of the 7 May on hearing radio news bulletins. Thousands of engineers rallied to the defence of the union. Hundreds gathered within an hour to stop police and bailiffs entering the union's head office. Reg Birch addressed the union members there, and warned against having any truck with the Social Contract, saying, "Unions which sign a contract have to police it.”

On the afternoon of 8 May, with the government fearful of this amazing response, an anonymous donor paid the costs against the union, even though the President of NIRC, Judge Donaldson, previously stated he would not accept such a payment. The Financial Times characterised this as “a legal conjuring trick”. Effectively this was the end of the Industrial Relations Act. Belatedly the Labour government repealed the Act and disbanded the NIRC.

The AUEW’s demolition of the act and its court undoubtedly scared the capitalist class. That fear is also reflected in the treatment of history books and web accounts devoted to this period. There is little or no mention of the engineers’ battles while there is plenty of comment about the disputes of miners and dockers. The TUC’s historical web archive fails to mention any AUEW action. It is as if these major events in the past had not occurred – wiped out by an ideological rewriting of history.

The remarkable steadfastness of the AUEW was in large part down to Reg Birch, then our party chairman. He played a key role through his position as union Executive Councillor and his previous lengthy spell on the National Committee. He cut the tools that others wielded. For four years the AUEW conducted a political action against a capitalist state seeking to fetter trade unions with fascist restrictions.

"The AUEW victory was a political earthquake that shook the whole country."

The AUEW victory over the industrial relations court was a political earthquake that shook the whole country. But it didn’t reshape it, because at the moment of victory the ruling class was already pressing against us in another direction. Soon the trade unions, including the AUEW, fell into line with the voluntary restraint of the Social Contract. They had denied the lessons of the fight against the Industrial Relations Act, and also the earlier defeat of In Place of Strife.

The Social Contract effectively made our unions the servants of a Labour government. Five years later that government gave way to Thatcher.