Skip to main content
Home » News/Views » The environment: what should workers do?

The environment: what should workers do? 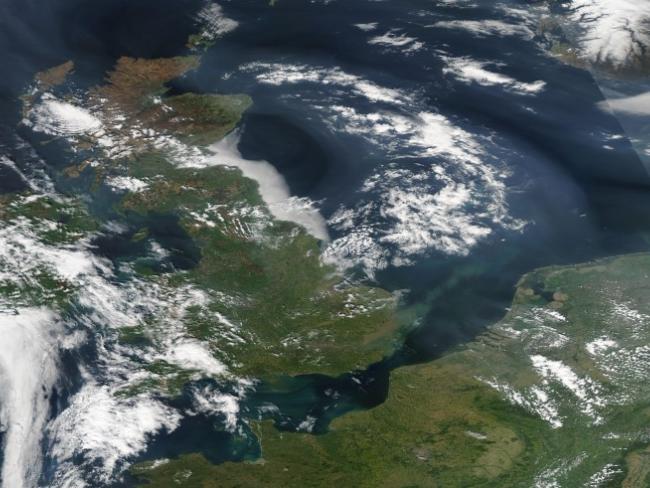 Air pollution over the UK, 22 April 2011, captured by NASA – Britain was wreathed in smog (more noticeable in this image over the dark blue of the North Sea), triggering air quality warnings. According to UK Air, most of the pollution came from continental Europe. Photo NASA.

In fighting man-made climate change and defending the environment, the solution does not lie with global capitalism, nor with the EU, which defends capital. Workers must do it themselves…

Created by global capitalism, the huge and growing problems with our environment must be tackled by nation states and their organisations such as the UN. Of course states are better able to tackle them if not governed by politicians in thrall to global capitalism.

It’s wrong to think that solutions must be “transnational” – beyond national action and the democratic reach of workers. The EU works closely in concert with global capitalism; its claims of “green” credentials are spurious, its decisions are not democratic.

Britain should be able to play a more effective role in tackling man-made climate change and pollution outside control from Brussels. But only if we impose this task upon our government, make it answer to us rather than to global capitalism.

We can change the polices of a national government more easily than we can change those of the EU. The four freedoms of movement at the heart of the EU – capital, people, goods and services – all act to prevent conservation and planned use of resources. They increase waste, emissions and pollution.

A lot that is said about the environment and climate change lacks clarity. Without an understanding of the dangers and risks, we will be prey to unscientific ideas and false polices, which can cause more damage than they claim to solve.

For most people the environment means the air we breathe and the place we live. The fear is that air is polluted and land is flooded. Both are detrimental, but neither is a direct consequence of climate change, nor are they evidence of it happening. We must look deeper.

‘It’s wrong to think solutions must be “transnational” and beyond the democratic reach of workers.’

The scientific consensus is that average temperatures across the world have risen quite sharply over 150 years or so and continue to do so. This has been reported in successive assessments by the Intergovernmental Panel on Climate Change (IPCC), a United Nations body.

The rise in temperature is believed to be mostly as a result of human industrial activity. The evidence for that is disputed at times, but the speed of change points away from long term natural processes and cycles.

So far, so good. But the implications of global warming are disputed; verifiable facts become scarce. The risk is that global warming, if sustained and continued, would lead to a change in the world’s climate and not just adverse local weather. Temperatures would permanently move out of the accustomed range.

The two main predicted and damaging effects are: a rise in sea levels due to melting ice; and a dramatic reduction in biological diversity due to inability of plant and animal species to adapt quickly enough.

What’s not known is how soon climate will change and by how far. Some scientists claim to have good predictive models, but these are not yet demonstrably accurate. There are several complicating factors that limit understanding. Underlying geophysical change takes place over long periods of time, blurring what is attributable to humans. Some aspects of human activity, such as small airborne particles like soot (aerosols), have a cooling effect; they are harmful but if reduced will increase warming.

And above all, the effect of temperature increase on climate is not linear. Climate may be resilient to temperature change up to a certain level and then alter rapidly beyond that point. This lack of certainty leads to unscientific debate, fear mongering and easy “solutions”.

For example there’s a government policy to replace all domestic gas heating in Britain to help achieve UN emissions targets. That would cost an immense amount, and would mean using less efficient and more costly electrical heating. This would still create emissions unless power generation is clean. Yet Britain’s housing stock is poorly insulated, even in some new buildings. Improving that might be a better way to start.

Nuclear power is one way to reduce emissions while more sustainable sources of power are developed. Sweden for example generates 83 per cent of its electricity from nuclear energy and hydropower. It met its 2020 target of 50 per cent renewable energy eight years ahead of schedule and aims to cut carbon emissions to net zero by 2045.

The potential for pollution from nuclear power is a risk, but a manageable one. Governments must exercise control over the use of this energy source.

Developing countries want a better standard of living, which will rely on industrialisation. They will inevitably emit more carbon and pollutants over the next period – until technology is available to them enabling their industry to operate without emission. This requires worldwide cooperation. But globalisation is part of the problem, not the solution.

Capitalist corporations have moved manufacturing industry from developed countries like Britain to developing countries like China – along with a large part of their emissions and pollution. And this creates even more emissions when goods are transported to consumers across the world. We and they should make more of what we need locally.

Capitalism forces consumers to buy new products constantly, ensuring that old ones become obsolete and fail. And often they cannot be repaired or recycled. Individual consumer actions cannot change the nature of these corporations, driven by profit.

The UN climate targets can only be achieved through states taking action, by planning and exerting control. Our government, once free from EU interference, can and must be forced to set much higher standards for industry to reflect what the people want. We can protect the environment only by interfering with the capitalist drive for profit – by controlling production and packaging.

Manufacturing and transport create greenhouse gases and pollutants. They cannot run on wind and solar power alone. Government investment is required to develop more sources of clean energy with little or no carbon emissions. But such investment is regarded as a subsidy by the EU – unfair competition. Our government, once free from EU control, must be forced to invest in developing this technology.

Industry is essential to our standard of living. Those arguing for abandoning industry, “a return to the land” start from the presumption that people are powerless in the face of climate change – and against capitalism too.

When scientists talk about “net zero” they do not mean stop industry. They argue that we can balance carbon emissions (the main source of warming) with reductions.

One such scientist is Myles Allen whose report to the UN in 2003 did so much to advance understanding of what’s happening. He was recently interviewed on the BBC Radio 4 programme The Life Scientific. He recounted that young engineers he met saw no problem with the aim of achieving “net zero” – to them it’s an engineering problem. Senior managers thought it difficult because they saw it as a financial problem.

Allen’s belief is that only the energy industry – oil and gas companies – has the capital and resources to solve this problem. Without effective control by governments they will not have the incentive to do so.

In the next issue we will look further at the environment, and in particular what we can learn from the EU’s dismal record on this issue.