EU and NATO ramp up tension with Russia 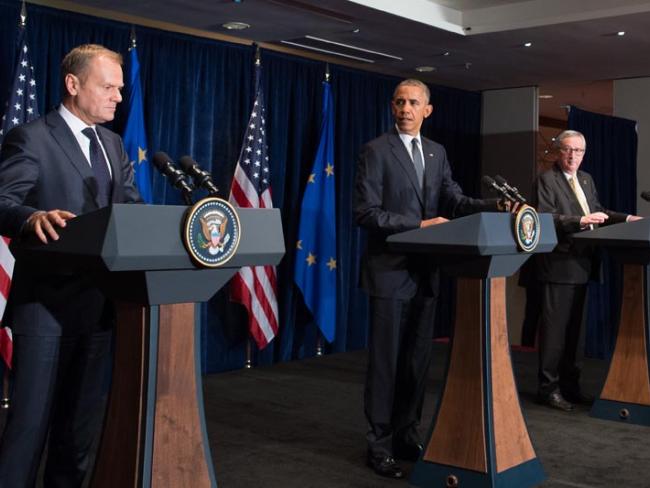 If any British workers doubted that the EU and NATO are two sides of the same coin, the EU–NATO leaders’ declaration of 9 July to deploy more troops and weapons on Russia’s borders – signed by European Commission President Jean-Claude Juncker and Donald Tusk, President of the European Council, should remove them.

The joint declaration in Warsaw follows the huge NATO military exercises that concluded on 22 June 2016 in the same border areas as the Nazi launch points used for invading Russia on 22 June 1941.

Here’s a question for those who pretend that the EU and NATO are about peace: Would the US see such massive deployment of military hardware by a foreign power along its own borders as a peaceful gesture?

The wrong side of history

The EU and NATO model of in-your-face confrontation is designed to reaffirm US policy that openly seeks to engage Russia in a war well away from the Yankee homeland. Those plans are now directly challenged by decision on 23 June to leave the EU by all available means. The EU and NATO are on the wrong side of history.

Meanwhile, David Cameron has just authorised heavy weaponry and hundreds of British troops to be placed in Poland and the Baltic states of Estonia, Lithuania and Latvia.

Unlike Tony Blair, Cameron never got his war while in office (though he came close in Libya and Syria), but he wants “standing up to Russia” to be part of his legacy. Obama, criticised for not doing enough in that department, is in equally warmongering mode as he leaves office.

For months RAF Typhoons have been patrolling Baltic air space, and thousands of NATO troops have been performing anti-Russian exercises. On 8 July, as the EU was forging ahead with plans to establish its own army, NATO General Secretary Jens Stoltenberg, together with EU president Donald Tusk and the discredited Juncker, signed a deal to boost NATO–EU cooperation. Ominously, one reason given is “to contain the massive wave of illegal migrants”.

As the EU falls apart, NATO has taken control of ballistic missile defence radar in Turkey, while US missile interceptors have been placed in Romania. The United States has broken its promise to reduce troop levels and has instead increased them, while still embroiled in Afghanistan. Cyberspace has officially been recognised as an operational domain. Now British provocation is being escalated on the ground “to reassure our allies”.

Not content with this, Cameron has also dragged British women into his war games for the first time, by lifting the ban on their participation in frontline close-quarters combat.

To claim justification as part of an equality agenda, or because other countries have set a precedent, is disingenuous. After Afghanistan and Iraq, the British army has found it hard to recruit from the male population. Now women are to be used as a stopgap and to normalise aggression.

The context is Brexit and US relations. Having failed to keep Britain in the EU, Cameron’s legacy requires that he do something to please his EU and NATO masters as they meet in Warsaw (this weekend) to the accompaniment of warplanes overhead. Meetings are also scheduled with Ukrainian president Petro Poroshenko.

Under the guise of diplomacy, leaders of France, Germany, Italy and the UK will meet Russia on 13 July. Putin has said that Russia is willing to cooperate, despite NATO acting like an enemy. As there has been no declared aggression by Russia, the EU can only make noises about the “potential” for conflict, while the press indulges in headlines such as “Putin’s army advances”. After Chilcot, what does this remind us of?

Russia, which sees terrorism as the main threat, has every right to defend its border and to denounce military build-up in the region. The Kremlin points to the hundreds of people dying daily in the Middle East, and dozens in the centre of Europe, and says: “We aren’t the ones getting closer to NATOs borders.”

During the referendum campaign it was frequently said by the Remain camp that it was the EU, and by the Leave camp that it was NATO, which had kept the peace in Europe. These views need to be challenged. Neither is true.

As with trade, both the EU and NATO are partners in crime. The EU is simply the gateway for the US to walk in. Britain needs independence from both.