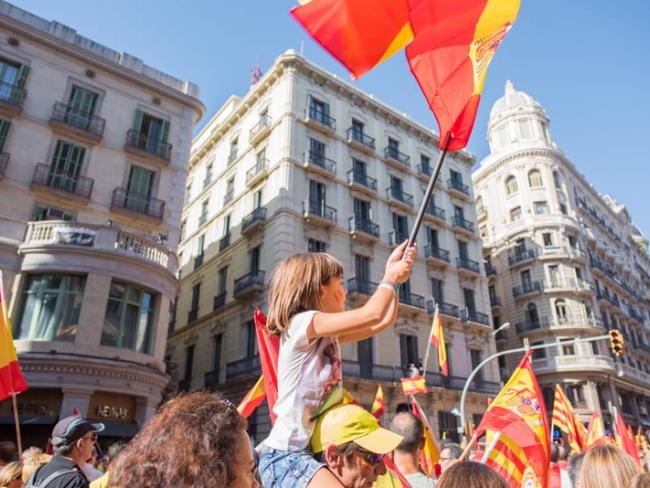 Barcelona 8 October 2017; demonstration for a united Spain on the day of the referendum. Photo Page Light Studios/Shutterstock.com

The separatist movement in Catalonia and the reaction to it have raised questions about the future of Spain. The EU pretends to stand to one side but the situation is of its making.

For many decades the EU has had a policy of “A Europe of the Regions”, which leaches power away from national governments. EU regional policy provides funds for projects to be enacted by local officials at a regional level, largely bypassing national governments. This policy represents one of the key tools of EU governance, attracting more than a third of the EU’s overall budget.

Power does not go to the regions, but instead to those who run the central EU institutions. More centralisation at the EU level and increasing diversity at regional level are parts of a single development, the weakening of the nation-state. This policy is designed to destabilise member nations, the better to impose a pan-European structure.

The EU has in this way stoked internal disputes inside many of its member countries. When these disputes flare up, as now between the Spanish government and Catalonia, the EU then sits back and watches as conflict erupts.

'The EU stokes internal disputes, then sits back and watches as conflict erupts.'

Spaniards who want to leave Spain are fighting the wrong enemy. The enemy is not Spain, nor other Spanish people. Nobody in Spain is suffering from national oppression. They are all suffering from capitalism, the euro and the EU. The last thing that the Spanish people need is another capitalist state on Spain’s territory.

Millions and millions of Spaniards want to live together in peace and freedom. The majority in the region who oppose separatism would be outraged at having their nationality changed by this minority vote. This applies even more so to those outside the region.

The EU is fomenting discord; it is the problem, not the solution. Nobody should interfere in matters that are the concern of the Spanish people.