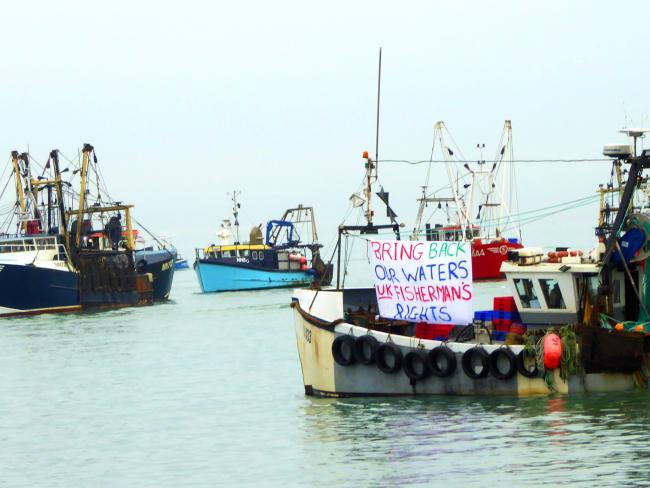 Fishermen reminding the government what Brexit was about, Hastings, April 2018. Photo Workers.

The EU hopes that somehow the coronavirus emergency will keep Britain in its orbit. The UK government has said that it will not contemplate an extension to the transition period. The impact of Covid-19 makes it more important that there is no further delay.

The new EU Trade Commissioner Phil Hogan asserts that he sees little sign of the UK’s desire to constructively engage in trade talks. But he sticks to the unbending EU line that any progress towards a “bespoke” trade deal is dependent on unfettered access to our coastal waters. He also wants a veto on divergence from any European standards and regulations relating to future commercial relationships with other countries.

A further precondition is continued adherence to European Court of Justice judgements. This is particularly ironic given that its recent ruling on the establishment of a €1.4 trillion Recovery Fund was immediately undermined by German judges. The plan is for further purchases of eurozone public sector debt by the major EU creditor countries to be used to support deficit economies as they emerge from pandemic. The German court ruled it ultra vires because individual member states are sovereign in respect of debt insurance under the terms of the Maastricht Treaty!

Britain and its fishermen fully understand the benefits of reciprocal access to national waters but these must be negotiated not imposed. After the transition period ends on 31 December the government will fully exercise wide powers in relation to our Exclusive Economic Zone. These include preservation of stocks, fisheries management and the social and economic importance of both to fishermen and coastal communities alike.

The inter-relationships in fishing are complex. For example, the many small shellfish boats operating around our coastline from Shetland to Cornwall are reliant on access to European markets with minimal tariffs. Coastal ports both here and in Europe are dependent on economic activity related to fishing.

Our cod and haddock are largely caught in the Barents Sea, waters belonging to our sovereign neighbours, Norway, Greenland and the Faroe Islands, with negotiated mutual access rights subject to annual review. Trade continuity and fisheries agreements have been signed with Iceland, Norway and the Faroes. Although part of the Kingdom of Denmark, the Faroes are self-governing and have never been part of the EU.

‘The EU position on fisheries contravenes the law of the sea.’

The EU refuses to accept that Britain, from the end of January this year, is no longer a member state. Britain is in international law an independent coastal state fully responsible for managing fisheries in the Exclusive Economic Zone extending up to 200 nautical miles from the coast.

Britain is no longer part of the EU Common Fisheries Policy, whatever the EU wishes. Parliament has passed a law that ends the transition period in December, but Britain will act within the terms of the CFP until then. The EU position on fisheries on the other hand contravenes the UN Convention on Law of the Sea, adherence to which is stipulated in the 2019 EU Withdrawal Agreement.

In the period after the Brexit referendum the UK government and parliament approached negotiations with the EU in a timid and subservient way. That created divisions in the nation and constitutional chaos. But in December 2019 the British working class turned the tables by emphatically voting for a government that promised to end the stalemate in parliament and with the EU.

Would Hogan and his team now be prepared to put at risk to tariffs a £86 billion trade surplus of the EU with Britain in manufactured goods? What would German judges make of such a position? Would all the remaining 27 member states ratify it?

Hogan knows full well that Britain has never, at any time, requested a “bespoke” trade deal with the EU. What we are asking for is nothing more than the arrangement already on offer to Canada and Japan: reciprocal tariff-free access with no associated conditions. A fraternal, mutually beneficial partnership with our European neighbours, but not at the expense of our sovereignty and independence.

Coronavirus has not stopped the EU agreeing a new trade deal with Mexico. Negotiations were concluded on 28 April. Objections and protests from Hogan and Michel Barnier, the EU Brexit negotiator, about the impact of the crisis are no more than tactics designed to keep Britain on the defensive.

And there are still British politicians willing to lend a hand to the EU and undermine the government. On VE Day Keir Starmer identified with those who 75 years earlier defended our country and our freedom. He omitted to say that for the past five years he has done everything possible to frustrate the will of the British people by pressing for surrender of our national sovereignty to an undemocratic body ruled by an unelected commission.

And true to form, four days later on 11 May Starmer said that he didn’t see how it was practical to agree a deal by December, but he wanted to “see how we get on” before proposing an extension to the transition period.

In the event of such an extension trade deals in the offing with the USA, Japan, Australia and others could not come into force until it finally ended. We would be drawn into the EU’s annual fiscal settlement but with no say in it.

Commitments would be sought from Britain in support of financial and legislative arrangements aimed at rebuilding economies that comprise a Union of which we are no longer a part. Business uncertainty in Britain would be protracted. EU jurisdiction over future trading partnerships or automatic alignment with EU regulations would present a barrier to resumption of normality and economic recovery. None of this will be tolerated by the British people.

Greenland and the EU

Greenland’s 5-year fisheries agreement with the EU expires on 31 December 2020. Greenland left the European Economic Community, forerunner of the EU, in 1985 during a period when it sought and won greater independence from Denmark. Although any negotiations must still include Denmark, Greenland has benefitted from being outside the Common Fisheries Policy.

Soon after the 2016 Brexit referendum former Greenland prime minister Lars-Emil Johansen said that the doubters who said Greenland could never get an exit deal as good as conditions under EEC membership were proved wrong. But it took a long time to achieve it.

The Lords EU Environment Sub-Committee wrote to the government on 5 March to point out the need to open negotiations with Greenland for an agreement to enable access to their waters to continue next year.

Chocolate’s coming home
Ireland and the EU: a bad marriage
EU law breakers: a reader writes
EU: no friend of workers
Chaos and cost ahead as EU looks for more money