EU still trying to trap Britain in its net 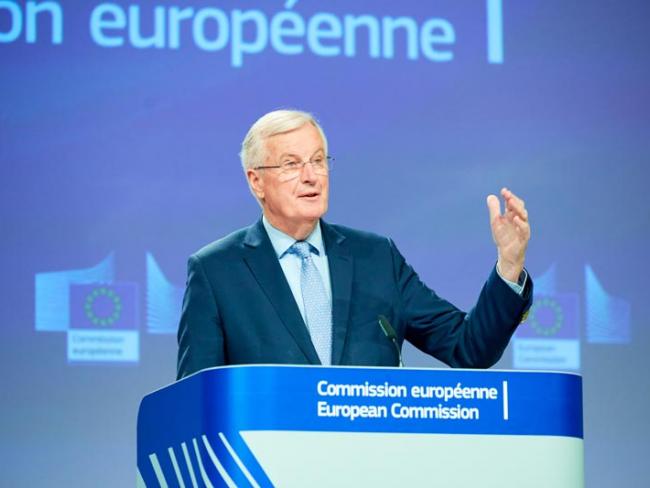 EU negotiator Michel Barnier after the third round of withdrawal negotiations with the UK, 15 May 2020. Photo  Claudio Centonze/EC Audiovisual Service.

Michel Barnier, the EU’s chief Brexit negotiator is at it again, threatening Britain. But this time the threat is an odd one: reach a deal with us, be more “realistic”, or face no deal. As if that were a threat!

Barnier’s latest intervention came in an exclusive interview for the Sunday Times, friendly territory for him. He seemed particularly incensed that the UK negotiators were not treating the Political Declaration as if it were some kind of binding legal document (which it isn’t).

It is nearly four years since the referendum vote to leave the EU, yet Britain is still in the EU’s single market and customs union. With no say in, never mind a veto over, any new laws the EU chooses to pass, Britain is still obliged to obey all the rulings of the European Court of Justice, and must still pay the EU huge sums of money.

It is worse than taxation without representation, it is extortion. And Barnier wants it to continue without end.

‘Planted leaks from unnamed “British officials” have claimed that the government is preparing to accept an extension.’

More worrying for the EU, the Withdrawal Agreement – and that is legally binding – gives Britain until 1 July to decide whether to seek to extend the transition period, which is due to end on 31 December. As the 1 July deadline looms, the EU and its supporters are doing all they can, increasingly desperately, to extend this purgatorial period, to keep us trapped in the EU’s meshes. For weeks, planted leaks from unnamed “British officials” have claimed that the government is preparing to accept an extension.

It is even more sinister that the Westminster leaders of the SNP, the Liberal Democrats, Plaid Cymru, the SDLP, the Green Party and the Alliance Party, wrote on 15 May a joint letter to the EU’s chief negotiator Michel Barnier calling for a two-year extension to be agreed between the UK and the EU.

Barnier replied that this is available if the UK wants it. At a price. In his reply he stressed that “Any extension … must be accompanied by an agreement on a financial contribution by the United Kingdom.”

Barnier also insists that we must swallow the acquis (the full set of EU laws) on competition, state aid, labour, and the environment – and future acquis through “dynamic alignment” – demanding ‘level playing-field' clauses of a character quite different from normal trade agreements. The EU’s ‘future arrangements’ proposal is not about trade, just as the EU itself is not about trade. It is an attempt to lock us back into the EU.

He went on: “I think we have always put a lot of emphasis on economic and political freedom at the end of this year and on avoiding ongoing significant payments into the EU budget. And, of course, those things are accomplished by ending the transition period at the end of the year.”