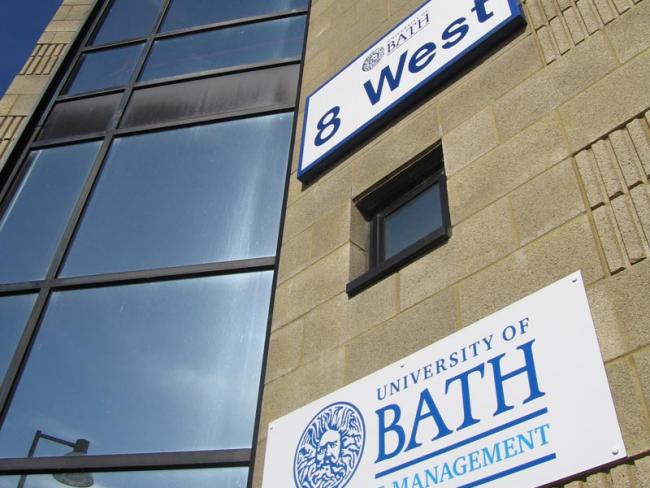 University heads are pocketing huge salary rises while staff wages stagnate. Top of the list in 2015/2016 was the vice-chancellor at Bath, with a package worth £415,000. Photo Bathsofm CC-BY-SA 3.0)

British universities are the best and worst of places. Undeniably there is still much ground-breaking research and many students enjoy their time there but the funding and staffing models harm students, staff and the wider society.

It is very hard for a student to work out how much of their course is delivered by such staff members. Furthermore, the nature of the contract is not necessarily an indicator of poor quality teaching as the individual teacher may have high standards, and may seek to shield their students from the difficulties they encounter.

Some students only realise the nature of their lecturer’s contract when they have not passed an assignment and then discover that the very person who could help them revise it is no longer available as they are not a permanent employee.

The impact of years of working on a zero hours contract takes its toll on the lecturer – and this in turn harms the student’s interests.

Poor working conditions impact on research and administrative staff as well. For example, 68 per cent of research staff in higher education are on fixed-term contracts, with many more dependent on short-term funding for continued employment.

‘The impact of years of working on a zero hours contract takes its toll on the lecturer.’

Fixed-term contracts mean that these staff have real practical difficulties in getting a mortgage. In London they can even affect rental contracts.

Academics complain that their pay has been capped since 2008, with many years of zero increase. True. But they don’t seem to be applying their minds to working out why. The simple answer – that the government is looking to save money – is no answer at all. Governments, like employers, always try to save money.

So let's stop looking for simple answers. Consider instead this question: with wages stagnating for a decade, why are university employers able to fill vacancies?

The answer will be unpalatable to many, but there’s no getting away from it: more and more academics are coming from abroad (EU and non-EU countries) – an apparently inexhaustible supply of highly qualified labour.

It would be bad if the only effect of this importing of skills were to lower wages here. But it’s worse than that, because the free movement of academics is sucking the most highly skilled labour out of the countries of eastern Europe and damaging their efforts to build up their own research base (see “Research and division”, p15).

This intellectual asset-stripping has allowed British universities to claim a lion’s share of EU research funding. In turn, all this research money is creating a big demand for research students as well, and half of the PhD students now come from abroad – like the US, and it’s just as imperialist in effect.

And many of these researchers will stay here, depriving the countries that educated them of talent, perpetuating the intellectual asset-stripping of the world.

“Free movement” sounds like a “good thing” – a boon to intellectual development and creativity. But shouldn’t academics be the first to deconstruct such cosy sounding ideas?

Yes, there is a case for academics to move to gain experience in a particular research field or laboratory, though Internet access and digital connectivity should be reducing the need for academics to physically relocate.

But the need to gain experience and share ideas cannot be the explanation for the scale of what is happening. Indeed the EU’s free movement is about re-engineering the creation of intellectual capital to lower its costs (hence the wage standstill) and concentrate its production in a small number of countries (hence the east-west brain drain), leaving the rest as intellectual vassals.

So this “free movement” is simply providing a free ride for British university employers, who can hold down wages. For universities elsewhere on the Continent it is having a damaging impact with expensive consequences.

The University and College Union (UCU) seems oblivious to any of the negative impacts of “free movement” on pay and conditions in Britain and to the negative impact on academic life anywhere else in the world. Indeed, the leading item on the campaigns page of their website as Workers went to press is the campaign “We are international”, with its focus of recruiting EU staff currently working in British universities to maximise their protection after Brexit.

Clearly anyone working in British universities should be a member of the union, but that should surely be for the purpose of fighting to improve pay and conditions for all.

In its campaign material the UCU concern is with Brexit: “This uncertainty has already led the ratings agency Moody’s to downgrade the credit status of several UK universities. Retention is also likely to be affected, with any ‘brain drain’ of intellectual talent to competitor countries inevitably leading to a negative impact on the international reputation of the UK.”

There’s not a shred of insight into the east–west brain drain already facilitated by free movement and no insight into how the employers have benefited. And is a strange world when a trade union is concerned with what a ratings agency says about an academic employer.

The final irony is that this nearly decade-long pay cap for lecturing staff has all been overseen by a collection of vice chancellors and their cronies whose own pay has gone through the roof. A good proportion of the escalating tuition fees has gone towards a boom in pay for the most senior managers in universities. At least 1,254 vice-chancellors and senior staff at UK universities now earn more than £150,000.

So “austerity” for some and a bean feast for others.

The expansion of higher education has come at a huge cost, and students are set to pay most of it. The most profound impact has been the “normalisation” of a culture of debt at an early age with a growing total amount of student debt and growing numbers caught in the net (see "Fight the fees? There’s no time like the present").

Initially it was some university students who were pushed into loans. Now we have students in FE and students on apprenticeships also taking on debt. September 2017 will see all nursing, midwifery and allied health students lose their bursaries and become part of the growing mass of young and not-so-young people having to borrow in order to train.

The recent election saw a greater awareness among students and their parents about the typical amount of student debt. It also highlighted the outrageous interest rates put in place by a certain George Osborne. Yes, the same George Osborne who now works for BlackRock Investments UK, which is bidding for the student loan book.