Skip to main content
Home » News/Views » Housing for people, not for profit

Housing for people, not for profit 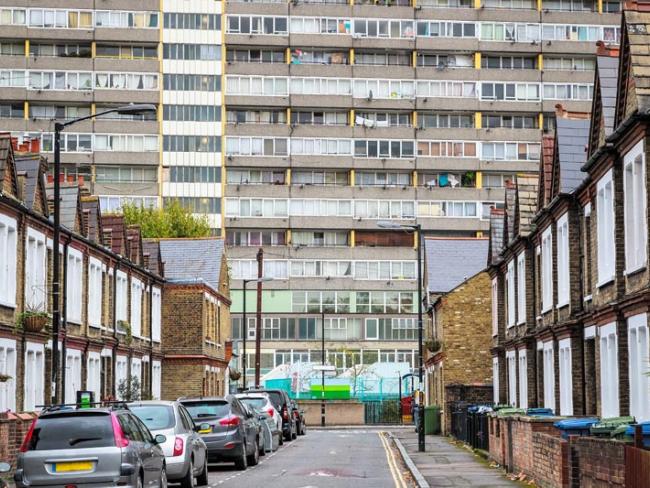 The Aylesbury Estate, Southwark, London, is notorious for the bad standard of its housing. Photo I Wei Huang/shutterstock.com.

Everyone needs somewhere decent to live – and to be able to pay for it. But housing in Britain has been in crisis for so long that it seems there’s no answer. It need not be that way…

The greatest, and most damaging, changes in government housing policy were during the Thatcher administration in the 1980s. The effects are still with us – not only from selling off council houses through “Right to Buy” but from cutting public expenditure on housing and removing responsibility for social housing from local councils.

The Blair government that followed Conservative rule continued those polices – reducing council house building further and pushing tenants to private rentals – and then added fuel to the fire with buy-to-let mortgages. The result was increasing inflation in house prices over the decade of that government, with only a short period when they dropped after the 2007-2008 financial crisis – to which overvalued property prices contributed.

Like its predecessor and all governments since, “New Labour” was wedded to “the market” for economic solutions. A series of changes to housing benefit rules linking it to market rents just drove them up – pouring public money into the hands of private landlords, instead of spending it on building houses.

Politicians love to talk about “affordable” housing, now they have abandoned council housing and look set to do the same with housing associations. That’s a misleading euphemism – and implies that workers deserve only basic accommodation by the grace and favour of government and developers.

The reality is that the cost of housing compared to wages is high and increasing, now over nine times annual earnings on average. And increases to interest rates will raise the cost of mortgages, or make buying a house unaffordable for many more.

About one in five of all dwellings are privately rented. Rental costs compared to wages have been more stable in recent years. But in any case, people in private rentals are on average spending 23 per cent of their income on rent (2020 figures, the latest available). And rents are rising sharply now.

Conditions and prices vary across the country, but there are no cheap areas or places free from housing problems. Rising prices and rents force more young people to live at home with parents, or to share overcrowded accommodation. Others live further and further from their workplace, incurring huge travel costs.

This can result in homelessness. Official figures are acknowledged to undercount the number affected. Rough sleeping more than doubled between 2010 and 2019, and housing charity Shelter estimated that over 270,000 people were homeless at the end of last year. That number was expected to increase sharply this year, even before the recent increase in the cost of living.

‘There are no cheap areas or places free from housing problems…’

Bad as it is, homelessness isn’t the most widespread housing problem. Inadequate, unaffordable housing creates social issues, not only poor mental and physical health but reduced educational achievement and limitations on work opportunities. This affects over 8 million people across the country, according to a 2020 estimate.

But even if you have somewhere to live and can afford the mortgage or rent, your problems may not be at an end. The Grenfell Tower fire five yeas ago was the most visible and tragic manifestation of poor quality housing – not just inadequate, but lethal. And it reveals a true crisis in building safety affecting public health.

The overall quality of the housing stock in Britain is poor and not improving. Repairs are often overdue or badly done, aided by the surge in private rentals and a shortage of public funds. According to one report this contributed to a significant number of avoidable deaths, particularly among older people.

These impacts are not spread evenly around the country. All areas are have housing problems. Expensive and often substandard accommodation blights cities – and those councils are exporting families as it’s cheaper to house them elsewhere. In rural areas, housing is less affordable due to generally lower wages, if it’s available at all.

In Whitby, North Yorkshire, people are so fed up with second home ownership, they voted in June to restrict new building for use as a primary residence. Some areas of South West England have argued for the same action. This begs the question whether what’s built is affordable, but at least it’s an attempt to control the local market.

The government’s actions are not much to shout about. In February’s patronisingly named “Levelling Up” white paper it said that by 2030, “…renters will have a secure path to ownership with the number of first-time buyers increasing in all areas” [whatever that means]. Its “ambition” is for the number of “non-decent rented homes” to have fallen by half.

The government had set up a review of the “Decent Homes Standard” in November 2020, but it covers only social housing. Progress has been stop-start, but it’s expected to report soon. What it won’t do is address the lack of enforcement of those standards and how any of this can be achieved.

The government says it will consult on the impact on the private rented market and particularly for those on the lowest incomes. They might save their time by looking at what’s already been published and said about the housing market and the negative impact on people’s lives.

Trade unions like Unite and Unison have been campaigning about housing, with coherent and detailed arguments setting out Britain’s needs. So too have charities and policy research organisations with an interest in housing. None of them say the need for action is in doubt.

The government says planning is an obstacle to speeding up housebuilding, and is in favour of further loosening of regulations. Most developers agree, in spite of many of them owning large “land banks” – seeing land already with planning permission as an investment, waiting while its value goes up and up. And we have seen what disasters can happen when building companies cut corners on regulations.

So do we really need lots more housing to be built? Existing poor standard older housing stock needs to be upgraded or replacing. Then there is pent up demand from those who have been unable over recent years to find a place of their own, with many young workers having to live with family or friends because they can’t afford to buy or rent.

The population is growing, with official projections of growth indicating an increase of five million people to add to the present estimate of around 67 million. Where will they live?

With the present government policy of encouraging migration to Britain of the “brightest and the best” from across the world (instead of concentrating on educating and training our own people to fill skilled jobs), our islands are going to become ever more crowded.

Its latest headline idea is to extend the right to buy to those renting from housing associations – up to another 2.5 million homes, equal to the total sold under the Thatcher and Blair governments.

This policy focuses on the supposed benefits of home ownership. It ignores all the other issues – not only affordability, but the shortage of construction workers and the dismal fact that many right to buy properties end up as private rentals – over 40 per cent in London in 2019 according to a 2019 Greater London Authority report.

Too often the debate is either short term (politicians) or reacting to a bad situation (everyone else). There is a better way. Housing is an essential public good, and public provision and regulation should rule, including: a publicly funded building programme; revived construction skills training; direction and price control on the use of development land; and rent controls.

We should demand homes for workers, not profits; realistic action now and long term planning instead of unfulfilled promises.