How to defeat the Bill 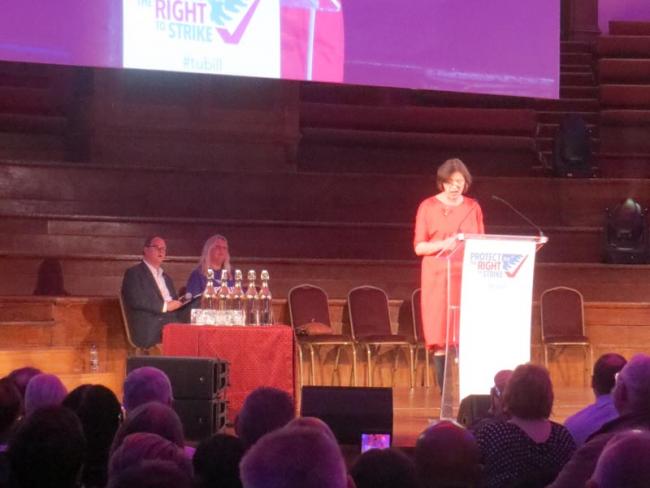 TUC general secretary Frances O'Grady at the lobby of parliament on 2 November. But stage-managed rallies and appeals to Westminster will not do the job. Photo Workers.

With a new law attacking membership and finances, we need organisation – and clarity of thinking…

The fascistic Trade Union Bill is currently going through Parliament and will shortly become law. It represents the logical next step for capitalism in Britain, aimed as it is to snuff out working class resistance to the government’s agenda of driving down pay, smashing public services, and rolling back gains made over many decades of struggle.

If the Bill is passed it could devastate membership levels and therefore union finances. It will severely limit the ability of unions to take effective and lawful industrial action. It will further undermine health and safety at work. And it will dramatically increase the ability of the state to directly interfere in the affairs of the unions. No organised working class opposition is to be tolerated. This is what fascism looks like. Except this time the thugs are in parliament, not on the streets.

The assault on membership and union finances is a particularly effective line of attack. With many unions already in financial straits, this Bill could prove fatal to some.

As a class and a trade union movement we have thought we could live with capitalism. We told the employers that unions were good for capitalism, and many unions came to believe this nonsense. It was a unilateral ideological disarmament.

The disarmament was practical as well. One example: unions blissfully placed themselves at the mercy of the employers by ending the practice of having shop stewards collect union dues in the workplace and moving to check off (see Box 1, page 14).

Employers actually make a tidy profit from handling this workers’ money. They charge the unions for providing a subscription collection service – and often keep the money back for months, earning interest on it before handing it over. And they quite like to know who the union members are.

Unions that overcome the challenges to their membership and money would also be faced with massive difficulties in mounting any sort of effective lawful industrial action.

Industrial action will only be lawful if more than half those eligible to vote actually do so. There will be six specified sectors (“important public services”) in which special provisions will apply. For the ballot to be legal, 40 per cent of all members will need to vote in favour, with anyone not voting being counted as a vote against.

‘This is what fascism looks like. Except this time the thugs are in parliament.’

These are precisely the areas in which recent industrial action has been most effective, such as the railways and the ambulance service. And teachers will doubtless reflect on the fact that they provide an “important public service”, something clearly not reflected in their pay.

And since the aim is to stop all industrial action, how long will it be before the threshold is raised – to 60 per cent? 70 per cent?

Yet, many union ballot results have been less than convincing. Industrial action held on the back of very low turnouts has simply played into the government’s hands.

The lack of genuine member participation leads to rhetoric replacing thinking, mechanistic tactics replacing strategy, empty gestures – and failure. There’s a clear lesson: any union that thinks it can start a fight, and win it, with fewer than half its members taking part in a ballot needs to carry out a serious reality check.

Unlike now, unions will have to specify their intended action on the ballot paper. Unions will need to give 14 rather than 7 days’ notice of industrial action, and the mandate of the ballot will last for only four months. All the employer will have to do is drag out negotiations and force the union to re-ballot – a further massive cost. And employers will be able to draft in agency workers to substitute for striking staff.

Unions mounting pickets outside workplaces will have to appoint “picket supervisors” who will be required to carry a letter of authorisation which must be presented upon request to the police or “to any other person who reasonably asks to see it”. They must also be identifiable by wearing an armband or badge. Failure to comply will mean costly fines to the union. These provisions will simply encourage those employers (aided by the police) that have blacklisted union activists.

The paid “time off” or facility time given to shop stewards and union reps by public sector employers is also under attack; it will be strictly limited. “Time off” is a term that is seemingly designed to suggest to other workers that union reps and stewards are work-shy skivers. It will particularly affect health and safety representatives – and hence make workplaces more dangerous.

All public sector employers will have to publish information on the costs of time off for reps, plus a breakdown of what the facility time has been used for. More ammunition for the likes of the so-called Taxpayers’ Alliance to demand further curbs.

The state will have unprecedented powers of intervention in union affairs through the Certification Officer – a role brought in by Thatcher (see Box 2, right). They will be given powers to investigate unions and access membership databases even if no one has made a complaint. They can impose fines on unions of up to £20,000. And unions will be charged for the privilege.

The response of the TUC has been a pathetic “Defend the right to strike” campaign, which relies on convincing the House of Lords to water the Bill down. This shows just how poor their understanding is of what this Bill is about.

There is no “right to strike”. British statute and common law do not, and never have acknowledged such a right. A right is only real when it is exercised, not when it exists in statute.

And neither will the EU come riding to our rescue. Not one piece of EU legislation protects collective bargaining or strike action – the much vaunted EU Charter of Fundamental Rights refers to negotiations and strikes, but only in accordance with “national laws and practices”. So much for “Social Europe”!

Our ruling class has knocked us down through the onslaught on industry, privatisation and the fragmentation of work. Now we’re on the floor they are coming to kick us. Appeals to their better nature, lobbying them in their front room, the Palace of Westminster, will not avail us.

Workplace organisation, assiduously applied in pursuit of winnable and necessary demands, remains our route to progress. The solution lies with workers, and with workers alone.

As Workers said in the September/ October issue, trade unions have to get off their knees and blow the dust out of their heads. Unions are attacked because they exist to make inroads into capitalism’s profits. The war between the employing class and the working class will not stop just because some in our movement wish to surrender, or seek some futile compromise.

So shake off the ideological shackles. Renew our unions on the basis of real involvement, stop seeing the employers as conduits for union dues, re-assert our class interests and get on with organising. That way lies the path to “Kill the Bill” – and to the survival of the working class.

• Related article: 2: Half a century of attack