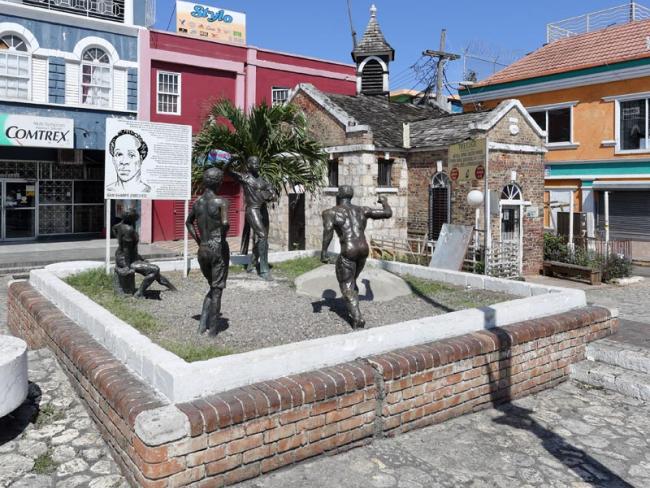 Seized from Spain in 1655 when Oliver Cromwell was Lord Protector, Jamaica was of little economic value at first. Cromwell increased the island’s European population slowly with indentured servants and prisoners and the economy grew to depend on slavery.

With the Treaty of Madrid in 1670 Spain gave up its claims to the island and this was an incentive to planting and settlement, and led to an increase in the supply of slaves from Africa. This resulted in more protection and military support for the planters against foreign competition.

In the mid-seventeenth century, competition from the North American colonies had depressed the prices of cotton and tobacco so local growers had switched to sugarcane. Jamaica and other Caribbean economies boomed to supply the wealthy British, who used sugar in cakes and to sweeten tea.

The number of slaves was low at first. It did not grow significantly until well into the 18th century as the sugar monoculture and slave-worked plantation society spread across Jamaica. Slavery existed from the beginning of British rule, and had been practised by the Spanish beforehand. By 1800 there were 300,000 enslaved people in Jamaica.

The sugar industry was labour-intensive. In all, the British brought hundreds of thousands of enslaved Africans to Jamaica. It was a brutal period. Slave owners subjected slaves to many atrocities, prompting often violent resistance. Many died in pursuit of freedom. Others died from poor conditions – for example unstable food supplies during 1780–87 caused the death through starvation of 15,000 slaves.

When the Spanish colonists fled in 1655 they left a large number of their former African slaves in three settlements. Known as “Maroons”, some had allied with Spanish guerrillas, while others served as a black militia for the British. A third group, who had previously escaped from the Spanish, lived and intermarried with the indigenous Arawak people.

Each of the three groups established distinct independent communities in the mountainous interior of Jamaica. They survived by subsistence farming and periodic raids on plantations.

‘Slavery existed from the beginning of British rule…’

During the First Maroon War in 1739-40 the Maroons took a heavy toll on the British troops and local militia sent against them in the interior. The war ended with an agreement between the Maroons and the British government. The Maroons were to remain in their five main towns living under their own rulers and a British supervisor. With the agreement the Maroons, admired by the British occupiers as skilled warriors, would serve to protect the island from invaders.

In May 1760, Tacky, a slave overseer, led a group of enslaved Africans to take over two plantations, killing their enslavers. They commandeered the munitions storeroom at Fort Haldane, before marching on to overrun two more plantations where hundreds of other slaves joined them. Eighty mounted militia and some Maroons were sent to suppress the rebellion. In the skirmish Tacky was shot and his head cut off. The rest of Tacky's men committed suicide rather than return to slavery.

The Second Maroon War started in 1795 when two Maroons were flogged by a slave for allegedly stealing two pigs. When six Maroon leaders came to the British to present their grievances, the British took them as prisoners.

This sparked an eight-month conflict, which ended as a bloody stalemate. The 5,000 British troops and militia outnumbered the Maroons ten to one, but the mountainous and forested landscape of Jamaica proved ideal for guerrilla warfare.

A treaty signed in December established that the Maroons would beg on their knees for the King's forgiveness, return all runaway slaves, and be relocated elsewhere in Jamaica. Suspicious of British intentions, most of the Maroons did not surrender until mid-March 1796.

The British used the contrived breach of treaty as a pretext to deport the entire Trelawny Town Maroons to Nova Scotia, Canada. After a few years the Maroons were again deported to the new British settlement of Sierra Leone in West Africa.

During the last quarter of the 18th century Jamaica’s sugar economy declined as famines, hurricanes, colonial wars, and wars of independence disrupted trade. By the 1820s, Jamaican sugar could not compete with high-volume producers such as Cuba. Production plummeted; by 1882 sugar output was less than half that in 1828.

The British Parliament abolished the slave trade in parts of the Empire (but not slavery itself) in 1807. This made a major contribution to that decline. Unlike in the US slave states, plantation owners could not convert ex-slaves into a sharecropping tenant class. Planters became increasingly dependent on wage labour and began recruiting workers abroad. Many of the former slaves settled in peasant or small farm communities in the interior of the island, the “yam belt”, where they lived by subsistence and some cash crop farming.

In 1831, enslaved Baptist preacher Samuel Sharpe led a strike among enslaved black workers demanding more freedom and a working wage of “half the going wage rate”. When their demands were refused the strike escalated into a full rebellion. A rebel military group known as the Black Regiment advanced into estates in the hills, inviting more slaves to join while burning houses, fields and other properties, setting off a trail of fires through the Great River Valley.

The Baptist War became the largest slave uprising in the British West Indies, lasting 10 days. It mobilised as many as 60,000 of Jamaica's 300,000 slaves. The rebellion was suppressed by British forces. The reaction of the Jamaican government and the plantocracy was even more brutal, killing about five hundred slaves.

That brutality accelerated the process of emancipation. Because of the 1831 Baptist War rebellion, the British Parliament held two inquiries. They contributed greatly to the abolition movement and passage of the 1833 law to abolish slavery throughout the British Empire.

• A longer version of this article online at www.cpbml.org.uk takes the story forward to independence in 1962.

A system set up for slavery