The lie of Social Europe 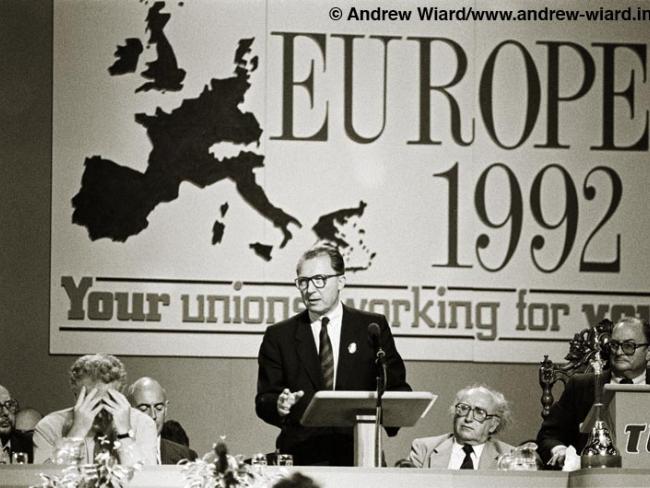 The beginning of a malign myth: European Commission President Jacques Delors at the rostrum at the 1988 TUC, Bournemouth, where the pro-EEC document “Europe 1992” was endorsed. Photo Andrew Wiard/www.andrew-wiard.info

To judge from what some trade unions say about the European Union, you might think that if Britain left we would suddenly be cast into an outer darkness stripped of all rights at work – no holiday pay, no equal pay, no redundancy pay. It’s a nightmare scenario, and it’s leant on all the time to persuade us that there can be no advance outside the European Union.

These people talk about the idea of a “Social Europe”, the notion that “economic and social progress must go hand in hand”, as the European Trade Union Institute puts it. It’s the failed plea of social democrats down the ages: make capitalism nicer, they say, and the economy will grow and capitalists will get richer too.

It’s an argument that has fallen on deaf ears, at least as far as the capitalists are concerned. They know that they get rich by owning the means of production and exploiting the labour of others. Nice has nothing to do with it. Capitalists may lack many things, but they do have a very clear understanding of class relations and class power.

Trade unions, too, have tried this argument, and many still do. Good employee relations are good for business, they say. The interests of the two classes are not opposed, the argument runs, they are identical! But such sweet reason has never won a pay rise nor a recognition agreement.

The tragedy is that many unions, and individual workers, have fallen for this failed thinking. And never more than when in 1988, during the depths of the Thatcher counter-revolution, the then president of the European Commission, Jacques Delors, came to the TUC to move it in a pro-EU direction.

“It would be unacceptable for Europe to become a source of social regression, while we are trying to rediscover together the road to prosperity and employment,” said Delors. He promised that the new internal market, the free movement of people, capital and goods, scheduled for 1992 would include a “social dimension”.

To the TUC, demoralised and devoid of class thinking (or creative thinking at all) it was like manna from heaven. No longer would they need to fight – the EU would solve everything. “The only card game in town is in a town called Brussels,” said Ron Todd, general secretary of the Transport and General Workers Union.

The Delors promise was never fulfilled. Indeed, how could it be? The EU is a capitalist club. The EU has instead become a principal source of social regression. And some 24 years later, European Central Bank president Mario Draghi put the nail in the coffin, telling the Wall Street Journal on 23 February 2012, “The European social model has already gone.” That won’t be news to the people of Greece.

‘Thankfully, despite the TUC’s best efforts, Britain has stayed out of the euro trap.’

Clearly, no one told the Labour Party. Labour is still worshipping the corpse of Social Europe, trying to will it back into existence. At its conference in Brighton in September, in what passed for a “debate”, Alan Johnson declared that there was “no progressive case for leaving the EU”, wilfully ignoring the case put so well by the RMT in June when it voted to campaign for British withdrawal from the EU (see Box, page 15).

Two years before the chaos of “Black Wednesday” in 1992 when Britain quit the Exchange Rate Mechanism – a precursor to joining the euro – the TUC was still peddling its dream of “Economic and Monetary Union” (EMU) as a progressive force.

Back in 1990, the TUC dribbled, “The objectives of EMU should be to promote sustainable development, full employment, and economic and social cohesion as well as price stability,” in what was also a tacit admission that EMU meant the opposite. Thankfully, despite its best efforts, Britain has stayed out of the euro trap.

The same deluded approach to the EU is evident in the TUC’s current approach to TTIP, the Transatlantic Trade and Investment Partnership currently being negotiated in secret by Brussels on our behalf.

“The TUC is calling for a TTIP that creates a gold standard for workers rights – so we want American workers to have the kinds of rights protection and worker representation found in Europe,” says the body that should be speaking for British workers, concluding by calling the fight to “properly involve unions in all parts of the negotiations on TTIP” an “opportunity to secure protections for public services, labour and environmental rights”.

Fat chance. Neither the European Union nor the US government have had or will have any intention of telling unions what is going on in the negotiations, leave alone inviting them to the table. But of course, the TUC knows that.

The delusions – and the misinformation – have seeped right through many layers of the union movement. Witness UCATT, the Union of Construction, Allied Trades and Technicians. “Since 1998,” it proclaims on its website, “thanks to the EU Working Time Regulations, workers have had the right to guaranteed paid holidays. Since April 2009, workers are entitled to at least 5.6 weeks (28 days for workers working a five day week) annual paid holiday per year.”

That’s not just a quibble with wording. It highlights something crucial. An EU regulation automatically has legal force in every country of the EU. A directive, on the other hand, needs to be put (“transposed”) into national law before it has any effect.

So although our Working Time Regulations are there because of a directive, they exist – and will continue to exist – regardless of whether Britain is in the EU or not. If we left the EU tomorrow, the law would still stand in Britain. It’s not a “right” we would “lose” if Britain became independent of the EU.

Second, the statutory right to guaranteed paid holidays was not a gift from the EU. It goes back to 1871, with the Bank Holiday Act (admittedly, only a few days). Third, not all workers are entitled to 5.6 weeks – the police and armed services are not covered. Nor are “self-employed” workers – who number roughly 4.6 million in Britain.

In construction specifically, a report from the University of Essex commissioned by UCATT and published in 2010 concluded that around 400,000 workers were “falsely self-employed” – and that’s on top of a slightly larger number of workers in the industry estimated to be genuinely self-employed. No guaranteed holidays for them. UCATT’s total membership stands at about 84,000. So much for the EU guaranteeing the holidays of construction workers.

And as importantly, the European Union’s Directive does not entitle anyone to “at least 5.6 weeks” a year. It sets a minimum of four weeks. In Britain the law construes that as excluding our eight public holidays (8 days is 1.6 weeks), but the EU directive allows countries to include public holidays.

Unions besotted with the EU should consider this: a British government – this current one, for example – would not have to leave the EU to reduce statutory holiday entitlement by eight days. All it would have to do is get parliament to amend the Working Time Regulations. Entitlement would shrink from 4 weeks plus public holidays to 2.4 weeks plus public holidays, and we would still be compliant with the EU directive.

What’s stopping Cameron from doing that? Only the knowledge that it is (currently) politically impossible. So much for our holidays being protected by the EU!

In fact, in 1997, a year before the implementation of the European Working Time Directive in Britain, only 6 per cent of full-time workers received less than 12 days’ paid holidays (though that figure probably excludes public holidays – it is hard to tell, as the survey gathering did not distinguish between public holidays and work holidays). The figure now, according to the government, is around 3 per cent (probably accounted for by employees such as the police excluded from the Regulations). So at around 97 per cent of the working population didn’t benefit from the European Directive.

The only good guarantee of decent holidays, and other working conditions, is strong trade union organisation. Even now, with the current laws in place, the TUC says that (on top of the self-employed) 1,669,000 employees are missing out on their legal entitlement to paid holidays. A survey by Xpert PR published in 2011 found that a common reason for increasing holiday entitlement was “employee/union negotiations”, and that companies with a “union presence” had on average two days more holiday a year. Sadly, less than 30 per cent of the workforce is covered by collective union agreements, according to official government statistics.

Pick up most newspapers and you can find total rubbish about the EU. Take this, from The Observer, speculating on the consequences of a Brexit: “EU law guarantees workers’ rights in areas such as maternity and paternity leave, holiday pay and in the event of mass redundancies. There would be pressure from business groups to relax these standards.”

As if there isn’t pressure now. One of the key ways that pressure is applied is in the form of fragmentation of the workforce through casualisation, which abolishes all these “rights”, and competition through unfettered migration.

The undeniable fact is that membership of the EU has gone hand in hand with a ruthless assault on Britain’s trade unions and on the pay and conditions of workers in Britain.

That’s hardly surprising. For all its talk of “a social dimension” and equal opportunities, the EU has written into its treaties the sanctity of four fundamental freedoms.

‘EU membership has gone hand in hand with an assault on unions.’

Those freedoms have been neatly spelled out by labour lawyer John Hendy in his paper “The terrible tale of the EU and Trade Union Rights” (available at tuaeu.co.uk): to provide services; to establish business; to move capital; to move labour – from one member state to another. “As we will see,” says Hendy, “these four freedoms practically trump all other rights.”

Hendy does not dismiss all the individual employment rights in various EU directives, but says that “the limited scope of these individual rights is notable”.

He goes on: “They have little application to most terms and conditions of employment to protect or encourage good pay and decent jobs. They say nothing about pensions nor about dismissal (save in particular circumstances such as in a transfer of an undertaking). They neither promote nor protect collective bargaining. They do nothing to protect the right to strike.”

Hendy’s paper should be compulsory reading in trade union offices around the country. It gives specific examples where the European Union’s Court of Justice has upheld the rights of employers against those of workers. Tellingly, it concludes that: “The EU has become a disaster for the collective rights of workers and their unions.”