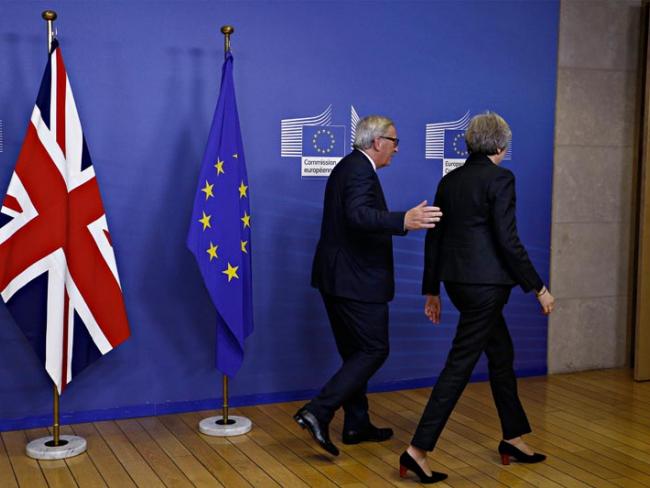 Off you go: Theresa May ushered off the platform by Jean-Claude Juncker, EU Commission president, in Brussels, November 2018. Photo Alexandros Michailidis/shutterstock.com.

Yes, the backstop matters. But the Withdrawal Agreement and its accompanying Political Declaration have the surrender of sovereignty built into every aspect…

On 14 November 2018 the European Commission and the May government published the draft Withdrawal Agreement. As Commission President Jean-Claude Juncker boasted, the EU got “almost everything” it wanted. A staffer for EU Parliament Brexit negotiator Verhofstadt at the Strasbourg parliament crowed, “It took us two years, but we managed – it’s done, on our terms and conditions. We finally turned them into a colony and that was our plan from the first moment.” (BBC4 documentary Brexit: Behind Closed Doors.)

The Agreement is not an agreement to leave the EU. It is an agreement to stay in the EU, all 585 pages of it. In part this is secured by the accompanying Political Declaration, which sets out the principles for any future relationship with the EU.

1: The backstop – a chain to bind us forever

The so-called Irish “backstop” would lock us forever into the gathering United States of Europe. As even Tony Blair has acknowledged, the EU would have a veto on our leaving – a one-sided arrangement, virtually unique among international treaties. The Attorney General told the Cabinet that there was no legal escape route and that it would “endure indefinitely”. The backstop would keep us in the EU’s Single Market and in the EU’s Customs Union.

Article 184 of the Agreement requires the UK to negotiate a further long-term agreement with the EU conforming to the Political Declaration. The Declaration has already surrendered all the key matters to be negotiated in future.

Article 4 of the Withdrawal Agreement allows the EU to “disapply” any UK law incompatible with the Agreement. So, we could not legislate our way out of it. In sum, the Agreement would bind us into the EU’s set of laws forever.

But backstop or no, the whole Agreement is a surrender of sovereignty, of independence.

2: No independence without control over the economy

An independent, sovereign country is not told by another how to run its economy or regulate migration, or how to write its financial rules. Yet that is what the Withdrawal Agreement and the Political Declaration would enforce.

Boris Johnson told the House of Commons on 26 July, “No country that values its independence and, indeed, its self-respect, could agree to a treaty which signed away our economic independence and self-government as this backstop does.”

But the backstop is not just about Ireland. The whole treaty is a backstop – a Brexit-stop.

As EU negotiator Sabine Weyand told EU ambassadors, the Agreement “requires the customs union as the basis of the future relationship” and the UK and the EU “must align their rules but the EU will retain all the controls.” The EU wants the rules in force during the transition up to December 2020 – its rules – to be the basis of the negotiations for what follows. The Agreement would allow free movement of labour through clauses about mobility.

The Declaration commits us to “an ambitious, broad, deep and flexible partnership across trade and economic cooperation, law enforcement and criminal justice, foreign policy, security and defence and wider areas of cooperation”. (Paragraph 3.) This would be BRINO, Brexit In Name Only, membership in all but name.

The Agreement would also allow the EU to control not just our industries but also farming and fishing. It commits us to negotiations on the Common Fisheries Policy (against all promises to the contrary) so access to our fishing grounds could be traded away, as President Macron confirmed straight after May signed the Agreement. The Political Declaration promises to “establish a new fisheries agreement on, inter alia, access to waters and quota shares” (Paragraph 75).

As well as being locked into the EU, the Agreement would make us pay handsomely for it. For starters, it would make us give the EU at least £39 billion.

Even the House of Lords’ (pro-Remain) EU Financial Affairs Sub-Committee concluded that “Article 50 allows the UK to leave the EU without being liable for outstanding financial obligations under the EU budget.” Not a penny!

But £39 billion would be just the start. The UK would be liable for our “share” of any financial commitments the EU makes before we leave, with no time limit on our liabilities (Article 143), so we could still be paying the EU for decades. And, indeed, in the case of pensions for UK nationals who worked for the EU, would be paying.

We would also be liable to pay out “in legal cases resulting from the execution of Union programmes and policies” provided that the facts that gave rise to the legal cases began no later than 31 December 2020 (Article 47).

In case of any doubt, the Agreement would allow the European Commission to decide how much we would pay to the EU bodies which the Agreement commits us to be part of. We would be giving the EU a blank cheque.

4: No sovereignty – the ECJ would still rule

A sovereign country makes its own laws. A subservient country has its laws dictated from outside – which is what the Withdrawal Agreement would entail.

Article 4 makes it clear that its provisions are intended to be directly effective in the UK. We would be subject to all EU laws, including new laws on which we would have had no vote or voice, during the transition period, with the possibility of extension until December 2022. And some aspects of EU law would continue to apply for decades.

EU law and the rulings of the Court of Justice of the European Union (ECJ) would apply in relation to the Separation Issues and the Financial Settlement for an indefinite period after the transition period.

‘A sovereign country makes its own laws…’

The Agreement would allow the Court to prosecute the British government for any perceived breaches of EU law for up to four years after the end of any transition period, with judgments and fines binding on us. The ECJ is a cornerstone of the EU’s emerging state, and obedience to the ECJ is the cornerstone of the Agreement.

The ECJ would be the sole arbiter of EU citizens’ rights in Britain until 2028 and indefinitely thereafter. This includes their “right” to bring in spouses from outside the EU (a right that UK citizens don’t have) and their “right” to claim child benefit for children living in their home country.

Under Article 5 of the Withdrawal Agreement British agencies and courts would have to have “due regard” to decisions handed down by the ECJ even after any transition. Under Article 168 (Exclusivity) only the ECJ can decide disputes over the interpretation of the Agreement. The Agreement would set up a Joint Committee to handle disputes – and it would have to refer all matters of EU law to the ECJ. Referring trade disputes to any other body, even to the World Trade Organization, is explicitly forbidden.

The Political Declaration spells out the continuing supremacy of EU law over UK law: “Should a dispute raise a question of interpretation of Union law, which may also be indicated by either Party, the arbitration panel should refer the question to the CJEU as the sole arbiter of Union law, for a binding ruling.” (Paragraph 134)

May’s deal would have us stay in the customs union and the single market and under the jurisdiction of the ECJ – that is, not really leaving the EU at all. It would trap us in the EU without a voice, without a vote and without an exit. It would make us a permanent dependent province of the EU.

This Agreement brought down the May government. Johnson said he won’t try to revive it. But he has also said that we could stay in the single market and the customs union for another two years.

This government might well try to sell us this deal, possibly without the backstop, as “getting us over the line” on 31 October. But if we don’t leave the EU’s Single Market and its Customs Union, if we don’t keep our money, if we don’t run our own affairs, and if we don’t evict EU law and the EU court, we don’t have Brexit.

It doesn’t just need a backstopectomy, as Johnson put it. It's rotten to the core.