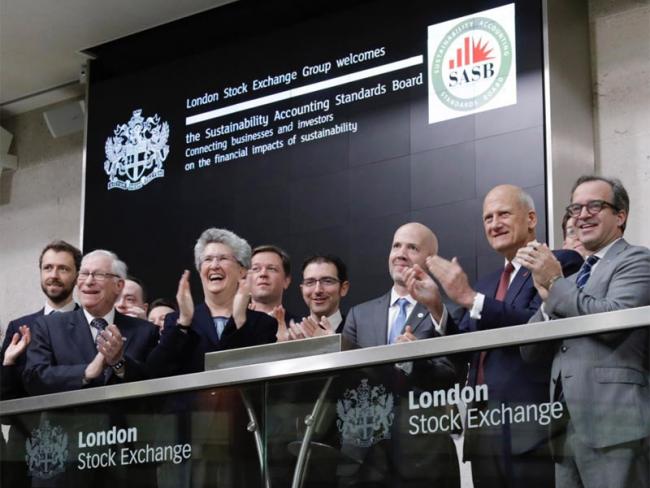 All very pleased with themselves. But it’s we who are paying the price. Photo London Stock Exchangee  (CC BY-SA 4.0).

This book challenges the economic ideas held by our rulers. Author Robert Skidelsky observes “Ultimately, the ideas in power serve the interests of the class in power; since the 1980s this has been overwhelmingly the financial class.”

Skidelsky is Emeritus Professor of Political Economy at the University of Warwick. Writing about austerity policies, he notes that the eurozone had the worst record of all the world’s economies. He attributes that in part to EU fiscal rules mandating balanced budgets, with austerity imposed on eurozone governments as a condition of loans from the ECB and IMF.

Italy, Portugal, Spain and Greece all experienced double-dip recessions. Greece was hit worst. The British government, outside the eurozone, actually chose austerity. And it seemed not to understand what it had done. The economy promptly proceeded to flat-line for two years.

As ever, workers pay the price. Skidelsky notes, “Ninety per cent of the population have not had a pay rise for ten years, and household debt is back to its pre-crash level.” The delayed recovery and slow growth were a direct result of the fiscal contraction, not a side effect.

Unemployment in Britain had fallen to just under 5 per cent, the lowest since 1975. But as Skidelsky remarks, “…this excludes the millions of part-time workers who say they would work full-time if they could, those forced into precarious self-employment and on to zero-hour contracts, and those over-qualified for the jobs they do.”

The vaunted flexible labour market has proved an illusion. On one measure over 10 per cent of the British workforce is under-employed.

“Ultimately, the ideas in power serve the interests of the class in power; since the 1980s this has been overwhelmingly the financial class.”

Government macroeconomic policy is summed up, “It promised to boost output by raising the rate of inflation, while being neutral on distribution. In fact, over five years (2011-16) it failed to get inflation up to target: it had, at best, a weak effect on output; and it was far from being distributionally neutral. After nine years of emergency money, the financial system remains as dangerously stretched as it was before the crisis, and the economy as dangerously dependent on debt.”

Writing about the banks he points out that, almost unbelievably, “the Bank of England’s foremost macroeconomic model between 2004 and 2010 omitted the banking system from its grouping of key economic agents.” That “…left the Bank unable to identify a burgeoning financial crisis in time, with an ensuing series of inaccurate forecasts and missed targets.”

He explains that IMF rules resulted in banks holding far too little capital to back loans. Those thought of as low risk, such as mortgage-backed securities with an AAA credit rating, became very attractive. Banks preferred these loans without questioning how the ratings were arrived at.

As we now know, that was an illusion and led to the crash. Speculators believed that default by any single borrower would not have an enormous impact.

To compound this error, the US Securities and Exchange Commission then ruled that AAA-rated mortgage-backed securities could be used as collateral for bank borrowing.

Incredibly, even after the 2007-08 crash, the UK’s Financial Services Authority’s 2009 report stated, “Financial innovation can be assumed to be beneficial since market competition would winnow out any innovations which did not deliver value added.”

Skidelsky explains the mechanics behind the crisis of 2007-2008 and subsequent recession: “most credit created by banks is not issued to finance new investment – the creation of new productive assets – but to expand consumption and speculate in real estate, currencies and stock markets. This leads to a volatile, destructive credit cycle.”

Even the IMF admitted in 2009 that boom and bust are not a sideshow of money moving round the world, but “…they are the main story”. One result is London became the world centre of money-laundering. Skidelsky says globalisation “has rendered life in the market more insecure, more criminal and less legitimate. Markets without states are mafias.”

Skidelsky makes the point that while economists and policymakers leave control of financial flows to financiers there is no incentive to do anything about imbalances between consumption and saving.

He concludes, “Flexible labour markets, greatly lauded by the conventional wisdom, are bound to slow down productivity growth, because it is more efficient for employers to hire cheap labour than invest in capital, physical or human. … the fall in worker productivity must lead…to even greater macroeconomic instability in future, as the economy relies even more heavily on debt.”

• This book was written before coronavirus and the pending economic recession. Skidelsky has written an excellent blog setting out the choices Britain now faces. Read it at "What Would Keynes Have Done". He says “A sound principle in today’s world is that all the goods and services necessary to maintain the health and security of the nation should be produced within its own borders, or those of its close political allies. If that means curtailment of market-led globalisation, so be it.”

Budget 2021: what it means for workers
Monopoly and regulation: a new path for Britain
Capital in the 21st Century: the film and the book
Seizing the future for Britain's workers
Rebuild the economy - create value