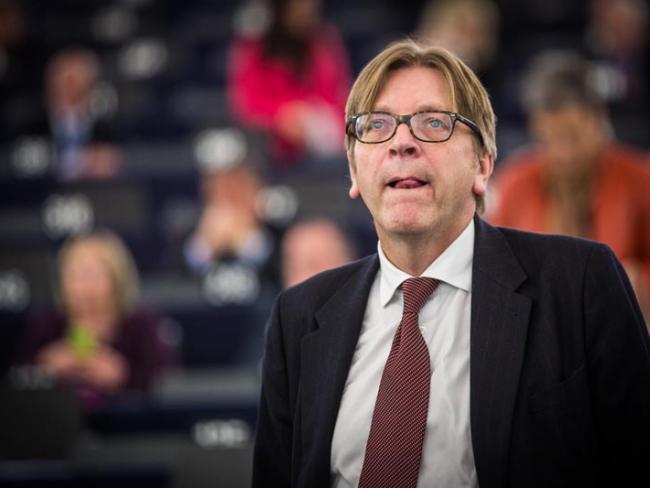 Want to know what the eurocrats are thinking? Just listen to Guy Verhofstadt. He’s the European Parliament’s Brexit coordinator, a Member of the Belgian Parliament and ex-Prime Minister of Belgium. He gained some notoriety in September 2019 by getting involved in British politics, addressing the LibDem Party Conference, where he held up a “Bollocks to Brexit” T-shirt and called for the EU to become an empire, like the USA, China and Russia.

In 2017 he wrote a book to elaborate on his vision for the EU to become a single state, a perpetual, indissoluble union, a United States of Europe. His subtitle gives the game away: “form a more perfect union” is a key phrase in the US Constitution.

Verhofstadt sees the EU as a future political and military superpower. He writes, “We must move toward a single European Defense Union, with European armed forces composed of soldiers wearing the same uniform.” This would become a full-scale European combined army capable of operating on land, sea and air.

He proposes a single joint budget for these, supported by additional compulsory contributions from member states. That would extend to procuring military equipment as well as research and development. In other words he wants the EU to control all the essential elements of a state’s armed forces – which leaves no room for member states to have their own independent forces.

“Among other things we will have to abolish the unanimity rule so that in the future the European Council can make its decisions with a qualified majority.”

What’s this all for? Verhofstadt says the EU high representative for foreign affairs “must cooperate closely with the European Defense Union and should preferably occupy the same building as the European General Staff. European Defense policy must however fit seamlessly into the union’s general security concept and strategic vision for foreign affairs. … This will require an amendment to the European Treaty. Among other things we will have to abolish the unanimity rule so that in the future the European Council can make its decisions with a qualified majority.”

In short, the EU would be able to make war outside its borders even if individual members objected.

Verhofstadt honestly points out the eurozone’s dreadful economic record: “no other continent in the world is ‘growing’ as slowly as Europe”. In 2009 the Anglo-Irish Bank collapsed. He comments, “The failure of one of the largest banks in Ireland not only threatened to drag the country into an unprecedented crisis but proved that the stress tests – and indeed the entire European Union economic program – were completely ineffective.”

As he notes, “recapitalizing the banks is still the very first step in successfully tackling a crisis. The longer it takes to complete this cleanup, the more stubbornly the crisis will persist.” He cites Japan, which spent more than thirteen years recapitalizing its banks after a mortgage crisis in 1990. Their economic stagnation, dubbed the “Japanese winter”, lasted twenty years.

Verhofstadt contrasts that with Sweden, which cleaned up its banking sector immediately in response to a mortgage crisis in 1992. Combined with a sizeable depreciation of the Swedish currency it generated a spectacular economic recovery.

He says, “The United States followed the Swedish formula to great success. Europe, on the other hand, landed in the same

situation as Japan in the 1990s and risks slipping into a persistent downward spiral of stagnation and deflation.”

But Verhofstadt fails to point out that Sweden only joined the EU in 1995 and that it has not yet joined the euro. So in 1992 it was free to adopt a national solution which involved depreciating its currency, an option not allowed to members of the eurozone.

Writing in 2017, Verhofstadt admits that the EU’s economic policy failure threatened another crash: “the number of toxic loans circulating in our financial system is still ten times higher than in the United States; as a result, there is no appetite for additional lending.”

The European Central Bank had been forced to reduce its interest rates to almost zero in an attempt to trigger a switch from savings to investment, despite the failure of that policy in Japan. Low interest rates cannot overcome a lack of business confidence. Two years later the ECB still faces the dilemma.

The last chapter is called “The United States of Europe”. He says: “The only solution for Europe is to reform the European Union in the model of the American federal government.” As he explains, “A federation would also put an end to the à la carte Europe, in which each member state picks and chooses its own form of single European Union via opt-ins, opt-outs, earmarks, and enhanced cooperation.”

He admits that the EU is undemocratic, inefficient, and wasteful. He acknowledges that there is no transparency about decision making by the European Commission. And as he points out, “Once national leaders assemble in the council in Brussels and close the doors behind them, they are accountable to no one.” But never mind.

In December 2017, a YouGov poll found that only 10 per cent of us want Britain to become part of a United States of Europe. The general election in December 2019 seems to have stopped Britain being part of this – at least for now.

We have to make sure that’s permanent, as well as dealing with the underhand decision of Theresa May’s government that tied our armed forces into the ambitious, expanding plans to build the EU army (see article No sovereignty without defence).