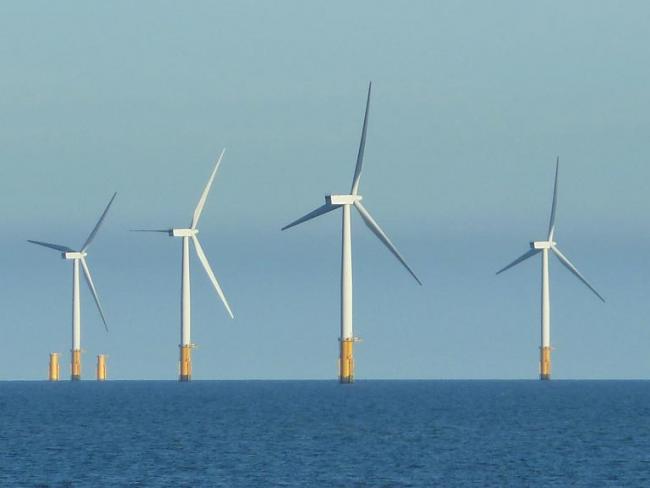 The government’s latest announcement on energy policy is full of positive signs, with a welcome wish to use government procurement to boost jobs and investment here. But workers will want more than promises…

At last the government is putting real money and real commitment behind a practical programme for Britain’s energy future. The programme includes support for infrastructure that will help build the country’s wind power generation.

The aim is to have 60 per cent of the country’s power supplied from offshore wind turbines. It’s an ambitious project, but wind alone will never be enough.

Britain already has the world’s largest wind farm, Hornsea One, off the coast of Yorkshire, and an even larger wind farm is planned for Hornsea Two. But if the wind drops on a cold winter’s day (or worse, winter’s evening), there has to be some other backup.

As if to underline this, the National Grid tweeted a warning on 14 October last year. “Unusually low wind output coinciding with a number of generator outages means the cushion of spare capacity we operate the system with has been reduced,” the operator said.

In an encouraging sign, the government announced support for a major push on Small Modular Nuclear Reactors (see Box), which could bring huge energy benefits to Britain as well as boost employment and export possibilities. Meanwhile, the big question with wind power is who benefits.

There was an intriguing sentence in the government’s announcement: “Together with planned stringent requirements on supporting UK manufacturers in government-backed renewables projects, these measures will mean the industry can reach its target of 60% of offshore wind farm content coming from the UK.”

‘The big question with wind power is who benefits…’

This policy – if implemented – would probably do more for Britain’s energy industry, and in particular for employment, than the £160 million pledged for infrastructure. Given that the government is talking about another 60,000 jobs being created directly and indirectly, this can only come about if more of the equipment is manufactured here. Much more.

And that can only happen when Britain is free of EU restrictions on procurement and government support. So a lot of people will be looking at the fine print of any agreement on so-called “level playing fields” with the EU, now or in the future.

But beneath the PR push of the announcement on energy support, there is still a long way to go. It raises the target for the proportion of British content in wind farms in the seas around the country from the 50 per cent announced in March to 60 per cent – a figure rightly described by offshore trade union RMT as “meagre”.

“The commitment for 60 per cent of the turbines to be manufactured in the UK only highlights that much more could have been done to invest in this sector and the jobs boost that would have been created. This was highlighted by the closure of Vestas on the Isle of Wight a decade ago,” said Unite assistant general secretary Gail Cartmail.

And that content is measured over the “lifetime” of a wind farm, generally considered to be 30 years. It may well be that initial British content is well below 60 per cent, with the rest to be taken on trust over three decades.

There’s a history of great government announcements followed by dismal results, not helped at all by the division of responsibilities that comes with devolution. In a graphic illustration of the gap between pronouncements and reality, a £2 billion deal for Burntisland Fabrications (BiFab) in Fife to build the metal jackets for turbines for the new EDF Neart Na Gaoithe (NnG) wind farm collapsed in October this year.

“Both the First Minister and the Prime Minister promised a green jobs revolution but they didn’t tell anyone it would be exported, and it all amounts to broken promises to workers who needed these yards to be thriving instead of dying,” said the unions Unite and the GMB in a joint statement.

“The fabrication contracts for NnG, just like those on the Seagreen project, will be manufactured by the rest of the world. Two projects worth a total of £5 billion, requiring 168 turbine jackets to power our future, and not even one will be built in Scotland, everyone needs to let that sink in.”

Workers will also need to be active to ensure that additional work is available for them, and at reasonable rates. After years of campaigning, the RMT and Nautilus unions forced the government to amend the law so that as from 1 October 2020 maritime workers employed in UK waters must be paid the minimum wage.

In principle, this should lead to more jobs for British seafarers supplying and working in the new wind installations. But the unions are still waiting for the government to make it clear what action it will take to enforce this.

Recent experience with, for example, the textiles industry shows that without enforcement many employers will simply ignore the law, especially with so many sub-contractors about.

And on top of this, the Home Office is still giving visas allowing nationals from outside the European Economic Area to work on ships supplying offshore installations, even though with proper training schemes Britain could easily supply the labour required.