Skip to main content
Home » News/Views » The NHS at 70: all to play for 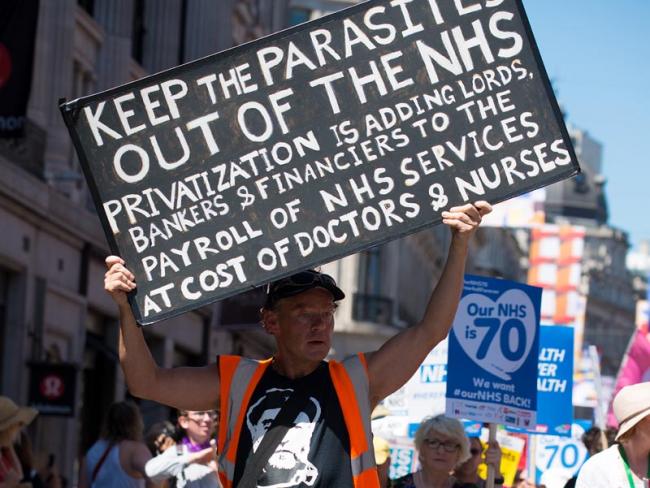 Left: placard held up on the march celebrating the 70th anniversary of the NHS and supporting its continued existence, London, 30 June. Photo John Gomez/shutterstock.com.

It’s been bruised and battered by cuts, reorganisations and privatisations. But little by little workers are ensuring that the integrated service is being put back together and there is a real prospect that it can be rebuilt…

The National Health Service was founded on 5 July 1948. Two days earlier, the Health Minister Aneurin Bevan explained in the British Medical Journal that it would spread the cost of health care “...over the whole of the community so that those who are fortunate enough to remain in good health may help those who temporarily fall out of the ranks.”

The biggest NHS union, Unison, organised an event held to celebrate that 70th anniversary.  Sadiq Khan, the Mayor of London, quoted Bevan (as portrayed in a 1997 BBC TV drama): “The NHS will last as long as there are folk with faith to fight for it”. Khan went on to say that Unison were the fighters for the NHS. The fighters? This may have flattered the event’s organisers, but if it’s true that the only fighters are in one union the NHS will be lost.

Bevan is the person most often given credit for establishing the NHS. Or if not, people usually mention William Beveridge, whose wartime report is cited as laying the foundations of the modern welfare state, whatever that may mean. In truth the NHS did indeed emerge from the Second World War – from the million men and women under arms who returned to Britain from it.

They would in no way have tolerated a return to the hated pre-war means-tested dole or being forced to pay to see a doctor. Together with the families to whom they returned, they forced the NHS on a temporarily pliable Labour Government. There was no backsliding or lengthy transition period.

The NHS is one of three great achievements that Britain has contributed to civilisation. One other is the industrial revolution, the fruits of which make all modernity possible. The last is the invention of trade unions, more necessary now than ever even with all their flaws.

Among those troops were the Royal Army Medical Corps. Their contribution to the treatment of battle casualties, and its commonwealth of care laid the organisational foundation upon which Beveridge and Bevan acted.

Soon after its inception, the problems facing the service were demonstrated with the introduction first of prescription charges and then dental charges, and then charges for ever more NHS services. Many years later these gaps in the system’s armoury gave Thatcher her cue to introduce widespread privatisation.

Clinical care has developed beyond all recognition in 70 years. Less beneficially, there has been unceasing organisational change in the service. Too frequently there’s the appearance of change when lack of resources makes useful change less likely.

There have been elements of the service run by Local Government, by District Health Authorities, Regional Health Authorities and Health Boards. Then there were NHS Trusts and Foundation Trusts, not forgetting the ill-starred Independent Sector Treatment Centres. All the while hospitals have remained hospitals, doctors remain doctors and nurses remain nurses.

But in many ways much has changed. In Britain there are hospitals without peer internationally, but many which should be demolished. Britain has some of the best doctors in the world, yet steals far too many from countries who need them more than we do. The same theft is true of nurses, whose clinical duties have burgeoned. Also new professions have emerged – paramedics, physiotherapists, radiographers. The list is lengthy, and growing.

‘It was the pressure of workers that led to the formation of the NHS, and it is to workers generally we must look for its sustenance.’

There is much about the NHS of which we can be immensely proud, as many of the celebrants have sermonised. And we are told that the NHS is the thing that makes most people in this country proud to be British. But we cannot be complacent at all.

We must be ever vigilant about the twin dangers of continued penetration of private capital – simply privatisation – and underfunding. There are signs that the British people’s choice of independence in the Brexit referendum will force on to the NHS the need for self-sufficiency, lacking until now. There are also signs that Thatcher’s most potent Trojan horse, the “purchaser-provider split”, will be tackled. She aimed to sound the death knell for the NHS; it outlived her.

Which brings us back to the celebrations. If Unison and its membership of more than half a million health workers are the only ones expected to fight for the NHS then it will not last for the next 70 years. It was the pressure of workers that led to the formation of the NHS, and it is to workers generally we must look for its sustenance.

The loathed Health & Social Care Act of 2012 (HSCA) is the most significant recent development. It is now widely accepted this law was an attempt to institutionalise fragmentation. For too long only some NHS unions took that view. They will be vindicated.

Recently a prominent NHS manager said that Andrew Lansley, at the time the secretary of state for health and author of the HSCA, should be put up against a wall and shot. The service, including its most senior staff, have found ways in which to undermine the insidiousness of the act’s provisions.

It’s one of those under-the-radar examples of how workers can fight for what is right. First of all many workers displaced from the organisations the HSCA abolished (Strategic Health Authorities & Primary Care Trusts) found work in the new ones created (Health Education England and NHS England among them). They brought with them the service's own ethos, explicitly counter to fragmentation.

Little-by-little, the integrated service is being put back together. Clinical Commissioning Groups, Lansley’s much-vaunted “GP commissioning”, are being clustered into the same configuration that the abolished PCTs were in. Moves are afoot to bring together NHS England (the Commissioning Board) and NHS Improvement, itself a merger of the Trust Development Authority & Monitor.

These may seem innocuous developments, but they are significant and real change is gradually under way. And NHS England chief executive Simon Stephens stated that the internal market, the purchaser-provider split, may end.

These will be limited by existing legislation. But creating new structures in practice, to then be confirmed in law, would be both effective and the polar opposite of Lansley’s “smash everything to pieces with new legislation” approach.

Brexit, as everywhere else, is having an effect. The prospect of having to train our own health workers as opposed to stealing them from abroad, has forced Health Education England to come up with the service’s first workforce strategy for a generation. The aim of self-sufficiency is central to that. There’s a long way to go, but the direction is positive.

That the NHS has survived these seventy years is an achievement. That it can be rebuilt is a real prospect. That just leaves us with industry and the unions to sort out!