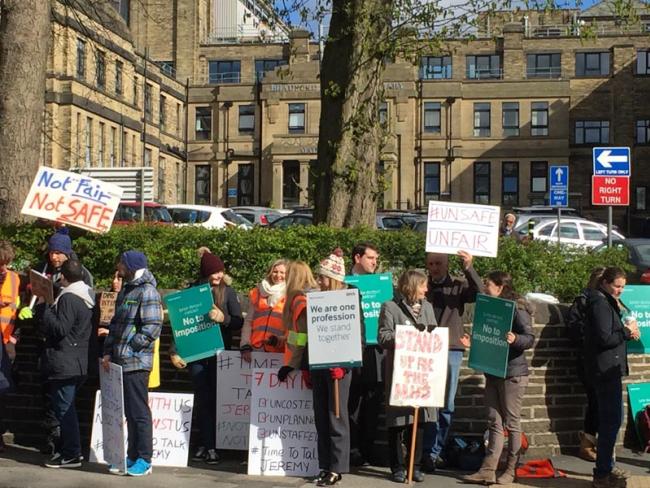 The health service desperately needs long-term planning. The attacks in recent years on health and social care finances, wages and pensions have lowered staff morale and undermined patient care. And in turn this has affected recruitment, retention and training. It will indeed take a decade to rectify the damage.

In 2010-11, just 5 per cent of NHS providers overspent their annual budgets. By 2015-16, two-thirds of trusts were in deficit as the slowdown in NHS funding took its toll. The injection of £20.5 billion over the next five years will not transform the service, though it’s welcome support.

Lifting of the pay cap is an important step too. The junior hospital doctors dispute in 2016 played its part in enabling these changes.

If, as it should, Britain leaves the EU without a deal it will save £39 billion that would otherwise have been spent on the divorce bill in return for nothing. Part of this must be secured for health and social care, although there are other priorities. More importantly there must also be planning to ensure that part of the money spent on our current annual payments to the EU is earmarked for health and social care

However welcome extra expenditure on the health service is, a “long-term plan” must be strategic and comprehensive. The government’s plan is problematic in several ways.

One limitation is obvious in its title – this is a plan for England, while the NHS is national. Devolving health matters to Scotland and Wales constantly interferes with rational planning.

Equally frustrating is that the long-term plan does not engage with the crisis in social care. The King’s Fund, responding to the plan, pointed out that the NHS and social care are “two sides of the same coin, yet the publication of the social care Green Paper has been delayed yet again”.

The plan frequently refers to how new technology can enhance health care. This was emphasised in the independent Topol Review published on 12 February. There is great potential in the application of DNA sequencing (genomics), artificial intelligence, robotics and other digital technology. The NHS is well positioned to exploit this, but the technology alone is not enough.

As the BMA says, “Fundamental to the expansion of cutting-edge treatments and digital consultations is to first get the basics right, such as the workforce. There is no use in opening the digital front door to the health service if we don’t have the healthcare staff behind it.”

The trade union Unison also highlights this as the most disappointing aspect. It points out that although the long-term plan recognises that workforce planning is “disjointed at a national and local level”, it actually has no detailed workforce strategy within it.

The challenges facing the NHS show no signs of abating. Figures published by UCAS in February show that the number of applications for nursing degree places continues to fall. It is now down by around 30 per cent since bursaries were abolished in 2016. That’s 13,000 fewer nurses entering training this year when there are 40,000 vacancies.

Waiting times for accident and emergency treatment continue increase too. In January they were at the worst level since targets were introduced in 2004. And despite relatively low levels of flu, many intensive care units are full.

The most obvious urgent need is retention of current staff. That means improving staff pay and conditions and assistance with accommodation costs. The plan includes only a small amount of money to aid such measures. Pressing for an increase and expansion to this funding must be an immediate priority for trade unions.

Solutions for the medium and long term can only come from NHS staff themselves. For example, doctors point to one post-referendum achievement, namely the expansion of the number of medical school places this September.

Since its inception the NHS has imported doctors. Yet there is no shortage of UK applicants with the enthusiasm or academic qualifications to meet our own needs. The aim of the long-term plan and the yet to be seen workforce strategy must be self-sufficiency in health care staffing.