Skip to main content
Home » News/Views » No borders, no control

No borders, no control 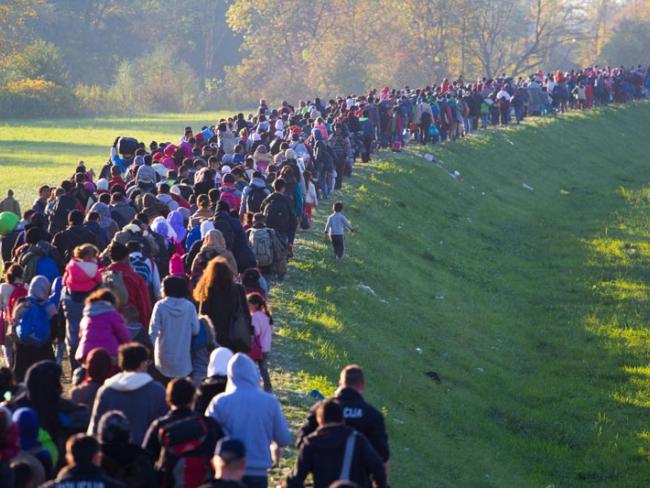 The 1957 Treaty of Rome, the EU’s original treaty, laid down “the abolition, as between Member States, of obstacles to freedom of movement of persons, services and capital”. Capital wants these freedoms to maximise its profits, pure and simple.

Judgements from the EU’s European Court have ceaselessly upheld the right of employers to move labour from one country to another to lower wages and circumvent collective bargaining agreements.

Hence the Viking case, allowing a Finnish shipowner to reflag ships to Estonia. And the Laval case, where a Latvian company imported workers into Sweden to build a school, undercutting Swedish rates. And the Rüffert case, where a German company won a contract to build a prison in Lower Saxony, then subcontracted it to a Polish company, which brought in Poles at below the rate agreed for Lower Saxony.

The free movement of labour encourages the modern slavery of workers moving at the orders of cheapskate global employers, gangmasters and people traffickers. It adds to the huge number of the reserve army of the unemployed. And it defies the laws of economic gravity to think that you can massively expand the supply of labour without lowering its price.

So while some countries are stripped of workers driven by unemployment to move abroad, in receiving countries like Britain wages are driven down, there is no need to invest in training, and enormous strain is put on services. Employers gain, and workers lose, every time.

Yet the friends of the European Union – in the TUC and some unions, as well as others proclaiming themselves as “left-wing” and “anti-racist” – ignore any evidence that free movement might be bad for workers everywhere in the EU, and bad for Britain.

There have been a string of reports from pro-EU think tanks about how migration benefits everyone. But in December these reports were blown apart by a detailed analysis published by the think tank Civitas.

The report, The costs and benefits of large-scale immigration: exploring the economic and demographic consequences for the UK, is in the public domain, available on the Civitas website. Its author is Robert Rowthorn, Emeritus Professor of Economics at Cambridge University. Anyone interested in the debate about migration should look at it.

Net immigration into Britain in the year ending March 2015 was 330,000 – while the UK Office for National Statistics (ONS) assumes a high migration scenario will involve net migration at 225,000 a year. Taking into account the children born to future migrants, at this rate the British population would grow by 20 million over the next 50 years and by 29 million over the next 75 years. This growth would be almost wholly due to migration.

The EU’s defenders have reduced the question of whether immigration is good for Britain to the economy – whether it boosts GDP. That’s the most favourable ground for the apologists because it ignores questions of who benefits from a change in GDP, and the net effect on social security when unemployed people cannot get jobs that go to immigrants.

Rowthorn puts the whole GDP discussion in focus: “There is widespread agreement amongst specialists that the overall fiscal impact of large-scale immigration is normally small as a proportion of GDP. The large positive fiscal contribution of some types of immigrant is largely or wholly offset by the negative contribution of others.”

He looks at one much-promoted study from academics at University College, London, which estimated that over the period 2001-2011, migrants made a net fiscal contribution. “Their widely publicised claim that recent (post-2000) migrants from the [European Economic Area] have generated a large fiscal surplus should be seen in perspective. The estimated surplus of £22 billion over the period 2001-2011 is only 0.2 per cent of GDP.”

But where are the benefits (if they exist) coming from, and who is carrying the cost? Rowthorn points out, “the benefits of immigration, to the extent they exist, derive in part from the unrequited transfer of investments in human capital that were made in foreign countries before the immigrants arrived in the UK”.

So what looks like a fiscal benefit is “merely a disguised transfer to the UK government from taxpayers and families in other countries”, says Rowthorn.

In fact, successive British governments have used immigration entirely selfishly, at the expense of poorer nations. The theft of scarce, well-educated labour has cost poorer countries far more than they have gained from investment and aid. In 2011, Romania – just one example – had 20,000 doctors, by 2013, just 14,000.

Addressing a British Medical Association conference in June 2014, Terence Stephenson, chairman of the Academy of Medical Royal Colleges, said he was concerned that we chose “to remain so dependent on doctors from overseas. … Not just from former Commonwealth countries but also from the European Union. … I think we should become self-sufficient.”

There is nothing progressive about annexing foreign labour. Isn’t that just what the British Empire used to do?

In 2004 Blair opened the UK labour market to workers from the Eastern European nations joining that year (known as A8 countries). He didn’t have to, and only Ireland and Sweden followed suit. All the other members took advantage of the accession agreements allowing member states to impose restrictions on the immigration from the new member countries for up to seven years.

Suddenly, people from Czech Republic, Estonia, Hungary, Latvia, Lithuania, Poland, Slovakia and Slovenia could work in Britain – but not in Germany, France, Italy, the Netherlands – on what appeared to them to be big wages. The result was predictable.

Jack Straw, Home Secretary at the time, has since said: “…we thought that it would be good for Britain if these folk could come and work here from 2004. Thorough research by the Home Office suggested that the impact of this benevolence would in any event be ‘relatively small, at between 5,000 and 13,000 immigrants per year up to 2010’.” He now concedes, “Events proved these forecasts worthless.…Lots of red faces, mine included.” Apology not accepted, Straw. Too little, and far too late.

Since 1997,  non-UK nationals as a proportion of workers has risen from 3.7 per cent to 10.3 per cent. EU workers accounted for almost the entire increase since the global financial crisis of 2007-08. In August 2015 the ONS revealed that non-UK citizens accounted for almost three-quarters of the employment growth in the past year.

In 2012 the government’s Migration Advisory Committee said an extra 160,000 British-born workers might have found jobs if there had been no non-EU immigration between 2005 and 2010. That’s just a guess, and probably a low-end guess too. According to the committee, there were in fact an extra 625,000 non-EU immigrants. There were also an extra 588,000 EU workers working in Britain.

Restricting EU immigrants’ initial access to welfare benefits would have little impact on the level of immigration (nor on the social security budget). The main driver of migration is the difference in wage rates between Britain and these countries.

In their haste to justify migration, the so-called “left” even picks up the arguments of the employers such as that the migrants are filling jobs that British workers won’t take. Rowthorn remarks, “In rich countries many dirty, hard or low status jobs are increasingly occupied by migrants from poorer countries. These are said to be doing the jobs that native workers will not do. In practice this often means that suitable native workers will not do these jobs at the wages and conditions that employers are willing to offer.”

Rowthorn disagrees. “There are few jobs that natives will not do if conditions are reasonable and wages are sufficiently high,” he says, citing evidence from Finland.

He concludes, “An econometric analysis by the official Migration Advisory Committee strongly suggests that immigration damages the job prospects of lower skilled natives when the labour market is slack…In addition, there is evidence that competition from immigrants may result in lower wages for low skilled local workers, including previous immigrants.”

He sums up immigration’s effects, “Even on optimistic assumptions, the economic and fiscal gains for existing inhabitants and their descendants from large-scale immigration are small in comparison to its impact on population growth.”

That impact is being felt in schools and hospitals around Britain. In August 2015, The Telegraph obtained previously unpublished government figures showing that 824,000 foreign nationals had registered for National Insurance numbers in 2014/15, up a third on the previous year, with 629,000 of them from the EU – and 150,000 of those from Romania alone.

The slogan “British Jobs for British Workers” was dubbed “racist” by many on the “Left”, assuming that British means white. They make a connection between migration and xenophobia, but the connection exists only in their minds. They deliberately confuse opposition to mass immigration with hostility to immigrants.

The EU wants a Europe-wide border agency to police the EU’s external borders, removing member nations’ rights to police their own borders. Astonishingly, the TUC wants the EU to run our borders. It told the Home Office in July 2013 that “the UK should participate fully and ‘opt-in’ to existing European legislation [including Schengen!] on Immigration and Asylum.”

The EU goes further than giving citizens of European nations the right to work here. The European Commission’s EURES online scheme advertises hundreds of thousands of jobs across the EU. In July 2014 Cameron promised to stop British jobs being advertised there. In October 2015, when even the official statistics showed 1.77 million Britons unemployed, the site was still advertising 122,214 jobs in Britain.

We cannot control our borders while we are in the EU. Only when we leave the EU will we be free to decide what level of immigration we want.

• Related article: The benefits of migration? – a look at Sports Direct in Mansfield