No British intervention in Syria! 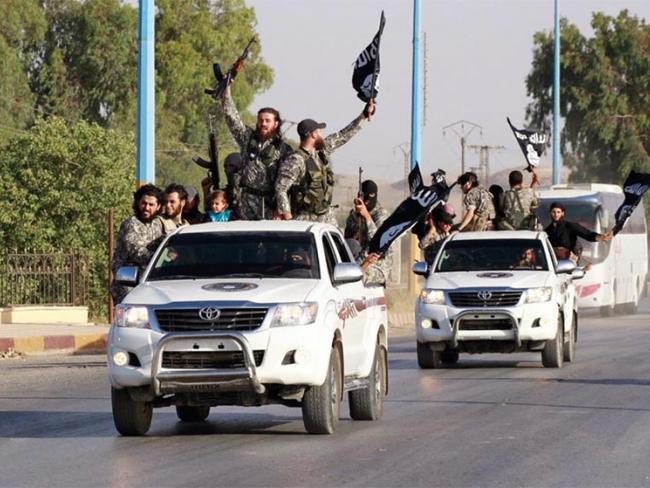 How come ISIS drives hundreds of identical Toyotas? Because the US supplied them to its chosen “opposition” groups…who handed them over to ISIS. US agencies are said to be “investigating”.

Cameron says we should bomb Syria to defeat ISIS. But clearly his aim is to shore up the crumbling “opposition”, which includes the al-Qaeda affiliate the al-Nusra front.

It should be obvious even to the dimmest MP that any British intervention could only be part of NATO’s aim of ousting Syria’s government. That would not only be a breach the United Nations Charter, it would be an assault on the Syrian people’s right to determine their own country’s future.

Russia has already started bombing ISIS and its allies, but on the invitation of the legitimate government of Syria. It goes without saying that Russia is also acting in its own national interests, but there is a world of difference between having an offer of support accepted and Cameron’s hamfisted attempt to shove the RAF into the front line whether the government of Syria wants it or not.

‘No-fly zones? What kind of madness is that?’

Some Labour and Conservative MPs are even talking about establishing “no-fly zones” in Syria, something that would bring the RAF into direct conflict with Russian planes. What kind of madness is that?

The Daily Telegraph has acknowledged: “Through allies such as Saudi Arabia and Qatar, the West [has] supported militant rebel groups which have since mutated into Isis and other al‑Qaeda connected militias.” (12 June 2014)

The Saudi, Qatari, British, French and US governments have all illegally sent special forces, supplies and weapons into Syria to help the opposition fighters, who are overwhelmingly jihadists. The result has been to increase the supply of weapons to ISIS – both directly and indirectly – while continuing to destabilise Syria.

Pushed by the Cameron government, in May 2013 the EU ended its embargo on arming Syrian “rebels”. Instead, EU member governments should stop training, arming, funding and supplying ISIS and its allies.

We have no national interest in turning Syria into another Libya – now a country with no government, lawless, borderless, and a breeding ground for jihadists. No British intervention in Syria!