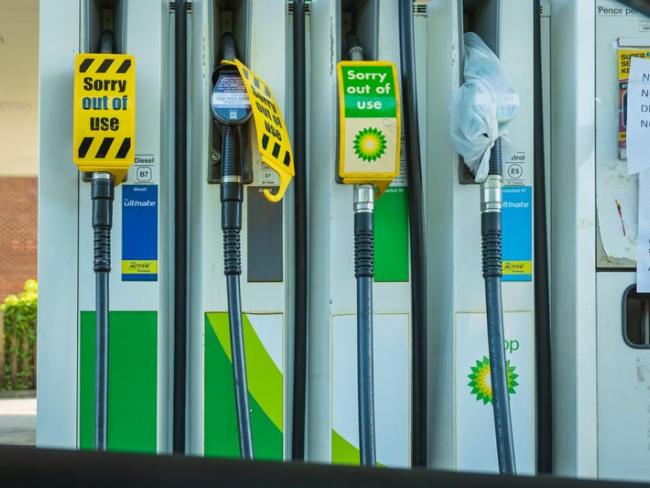 Northampton, 26 September 2021: pumps out of action as the panic sets in. Photo Jevanto Productions/shutterstock.com

More than a year after Britain finally left the European Union, a battle is being fought out across the country’s retail outlets.

On the one hand there are those who revel in any problems that Britain is facing, the handful of unrepentant referendum-deniers who want Brexit reversed. Standing with them are those who want the EU’s freedom of movement – but only if it can be extended to the whole world. And the public is paying the price.

To go by some reports, our supermarkets are empty, fields are full of unpicked crops and Armageddon is just around the corner. Throw into the mix the “just in time” supply chains adopted by supermarkets and manufacturers and you have a perfect recipe for chaos.

Enter the Road Haulage Association (RHA), peddling wild stories that Britain is short of 100,000 HGV drivers. The figure was seized on by the Opposition and rapidly relayed throughout the media.

But when Full Fact asked the RHA how it came to the figure of 60,000 for pre-existing vacancies, “it wasn’t able to explain why it had estimated the historic shortage at that level. It told Full Fact it estimated this historic level at 50,000 drivers in 2015, but couldn’t explain the figure further.”

While there may be little clarity on precisely how many drivers the industry is short of, what is clear is that politicians of all stripes have been exaggerating numbers and focusing on the wrong reasons. A report from a think tank run by HGV recruitment agency Driver Require rubbishes the 100,000 claim, and the idea that Brexit is the main cause of the crisis.

Instead, says the report, the Covid-19 pandemic is the main reason why drivers have quit – and that efforts should focus on enticing back into driving for a living some of Britain’s 330,000 HGV licence owners who have left the industry ­– 235,000 of whom are under 45.

Nor is it clear what the shortage of tanker drivers is, and whether it is sufficient to cause a crisis in delivery. What is clear is that a number of car drivers decided that panic buying was the way forward: Sky News on 6 October cited data from EdgePetrol that the average petrol purchase leapt by 5 litres in the week of 22 to 29 September – a period that according to driving app Waze also saw a 190 per cent rise in the number of people driving to petrol stations.

Never mind how many tanker drivers there might be, that sort of panic will create a shortage at any time of the year. And with the panic came louder and louder calls for the government to issue 10,000 “temporary” permits, in stages, to allow eager EU HGV drivers to come to Britain to work.

But with an HGV shortage affecting the whole of the EU (and the US as well, with Walmart reported to be offering a $12,000 signing-on bonus in some areas), there seem to be few takers for the emergency visa scheme. As of 5 October, just 127 had applied.

That shouldn’t have come as a surprise to anyone who has followed the news about wages and conditions for HGV drivers. Many supermarket chains fail to provide proper washing and toilet facilities, or hot meals, or secure parking at their depots.

‘During the election the government made a public commitment to ending open-door immigration. But the prospects don’t look good.’

During the last general election, and since, the government made a public commitment to ending an open-door policy on immigration. Not until the Covid-19 pandemic comes to an end will there be any kind of reliable figures. But the prospects don’t look good.

At the beginning of the year the government introduced its much-heralded immigration rules. These actually made it easier for employers to scour the world for skilled labour by abolishing the resident labour market test for skilled workers, meaning that companies no longer had to prove that they couldn’t find skilled labour locally.

The crackdown came – or appeared to come – in the area of so-called unskilled labour. (Strange to relate, HGV drivers are deemed, officially, unskilled.) Now the government is backtracking on that too.

Greater clarity can be found among the trade unions. RMT general secretary Mick Lynch told a fringe meeting at the Labour Party conference in September that the government was going backwards instead of recruiting from inner-city communities here. “Instead, they want to bring people here from all over Europe, on poverty wages and poor terms and conditions,” he said.

Unite’s national officer for road transport, Adrian Jones, said: “By plundering workers from other nations, the government is propping up a broken and exploitative system. Kicking these issues into the long grass instead of taking decisive steps now will only create worse disruption down the line.”

A similar response came from Bev Clarkson, Unite’s national officer for food and drink, on the threat that a shortage of workers will leave turkeys unplucked for Christmas.

“The poverty pay and insecure contracts on offer in poultry processing do not compensate for the physically draining and unpleasant work. That needs to change. What must not happen is the reestablishment of an employment system that relies on exploited migrant labour and pits workers against each other,” she said.

And right on cue, the government confirmed on 30 September that the pandemic-driven extension on maximum hours for HGV drivers is to be extended. Unite general secretary Sharon Graham was quick to respond: “This is yet another knee-jerk response to a crisis which has been building for nearly 20 years – and the blame for that lies entirely at the door of the employers, and their willing partners, the government,” she said.

“Years of suppressing drivers’ pay and attacking their working conditions has led us to where we are now. Far from tackling the current crisis, this latest extension on drivers’ hours will increase the pressures of the job and, as a result, further endanger public safety on the roads. This expediency will end in failure.”

Then, on 5 October, the union revealed that the government has not conducted a health and safety impact assessment on lengthening drivers’ hours. “Drivers will not return to a sector when the hours on the road can be extended at a whim by government and with no proper regard to road safety,” said Adrian Jones.

Driver Require suggested in its report that one helpful move would be “to amend the Working Hours Directive and Tachograph Hours legislation to limit working hours or enforce longer breaks”.

Keir Starmer, meanwhile, stands four-square with the employers. “It is a complete crisis,” he said on The Andrew Marr Show on BBC on 26 September, parroting the RHA claims of a 100,000 HGV driver shortage and stoking the panic. “Would you as prime minister bring in 100,000 foreign drivers to solve this crisis?” asked Marr. “We’re going to have to do that,” said Starmer.

What’s really panicking employers is that they are having to pay more for drivers. The supermarkets in particular are digging into their pockets, according to a survey by Retail Gazette.

Salaries are up £5,000 at John Lewis. There’s a £2,000 sign-on payment at Marks and Spencer, plus up to £3,000 more in incentives. Poundland will pay the cost of getting an HGV Class 1 licence (for articulated lorries), and is paying £1,000 bonuses at some depots.

Tesco brought in a £1,000 signing-on payment, and raised pay at the Hemel Hempstead, Hertfordshire, depot of its subsidiary Booker Retail Partners by £5 an hour – though that is only a temporary move. Presumably Tesco is hoping that Keir Starmer’s plan will be implemented and it can bring wages back down.

The employers may find that an uphill struggle. When the 40 drivers at the Booker depot in Thamesmead, south-east London, learnt of their Hemel Hempstead colleagues’ success they demanded the same – and when denied it voted unanimously to strike.

The company has rapidly had to make a serious offer to the Thamesmead drivers, who supply 1,500 Londis, Premier, Budgen and Happy Shopper stores across London and the South East.