Nurses need action, not outrage from the sidelines 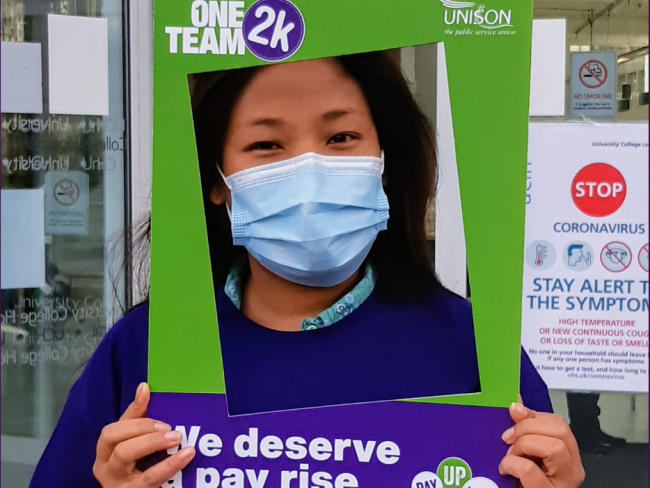 Unison campaigning in London for a £2,000 a year rise for all staff. Photo courtesy Unison LAS.

Start with a fundamental question: Why does the government think it can get away with a 1 per cent rise for nurses? Could it, just possibly, be because it has had far too little trouble – so far – getting away with a pay freeze for other public sector workers, many of them also NHS workers?

The hard truth is that if workers throughout the public sector were taking up the battle for pay, nurses would have a much easier fight on their hands. It’s all well and good cheering on from the sidelines, but the best support for a strike is to take action yourself.

It’s certainly not enough to hope that the government can be persuaded by exerting pressure on Conservative MPs in the so-called “red wall” seats. Nor that a slow hand clap will turn the political world upside down. As it is, the government is looking at what it’s getting away with elsewhere and probably thinking that 1 per cent is generous.

And here’s another fundamental question. Given that average nurse pay fell by 6.4 per cent in real terms between 2010 and 2020, why is the government not worried by predictions that the NHS, for example, will be short of 36,000 nurses by 2030, for example? Surely lower real wages don’t help keep staff.

The answer is uncomfortable for some. It is that the government calculates it will always be able to import NHS staff from developing countries as well as southern and eastern Europe at salaries that look attractive in Lagos or Kampala, Athens or Bucharest.

Take Brighton and Sussex University Hospitals NHS Trust, for example. Last week it sent out a newsletter to staff preening itself about the arrival of seven Nigerian nurses in February, with a further 61 to come by the end of April (it’s planning to import a total of 200 nurses this year).

It hadn’t even sorted out where they will live. “Our new nurses are now looking for accommodation,” it said, asking staff if they knew of anywhere suitable!

Yet Nigeria is in the grip of a rise in Covid-19 infections (on top of all the other health difficulties it faces). In February, even as Brighton and Sussex’s Nigerian nurses were in quarantine, a senior Nigerian official told CNN, “The number of cases has continued to rise, and it is putting undue pressure on our health facilities. If we are not able to control the number of cases or provide more facilities, I am afraid certainly it is only a matter of time before the system becomes overwhelmed.”

What kind of country lures medical staff from much poorer countries, trained at that country’s expense, in the midst of a medical emergency? One that is happy to strip other nations of their skilled resources.

The government talks boldly about reducing immigration, yet it is constantly making it easier for employers to import labour. The same government insulting the nurses with a 1 per cent rise amended immigration rules last year to make it easier to import nurses.

At the time, the Royal College of Nursing responded with a press release that said nothing about training more nurses here, or re-introducing bursaries. All it did was call for the relaxed rules to be applied to social care workers and NHS contractors. (The government duly added some social care workers to its fast-track immigration list on 4 March this year.)

The solution to a nursing shortage lies at home, in expanded training and enhanced pay and conditions. But that costs money.

In response to a Freedom of Information Act request last year, Brighton and Sussex University Hospitals NHS Trust estimated the costs of recruiting an overseas nurse at £3,000, excluding certificate and visa costs, and a doctor £7,000 to £10,000, depending on grade.

Before nursing bursaries were abolished, it cost the government £51,000 to train a nurse. And according to Full Fact, it costs about £163,000 to train a doctor (excluding student loans).

On 18 February UCAS announced that applications to university and college courses for nursing degrees were up 32 per cent year on year. That’s good news. But only up to a point. Total applications were still just 60,130: in the three years before the axing of bursaries applications ranged between 66,190 and 67,415.

South Yorkshire bus workers win big pay rises
In the balance - progress or decline for rail?
'Reclaim our time' in uni fight
University workers on the picket lines in pensions fight
Budget 2021: what it means for workers