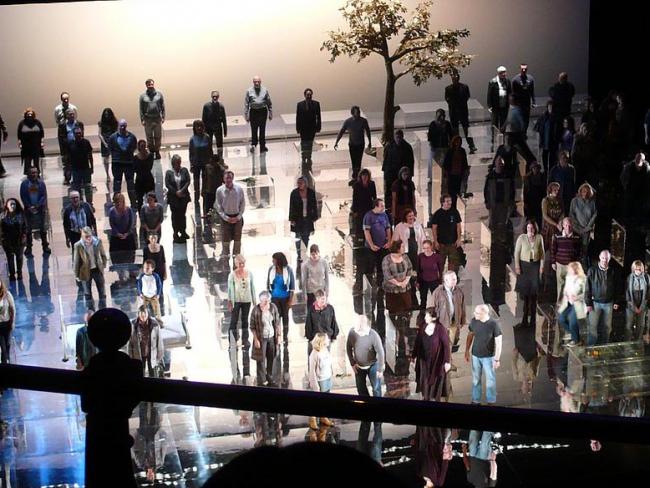 Equity members at the English National Opera (ENO) have voted to strike to protect their pay and working hours. Their members voted unanimously in favour of the action, in response to proposals from the management to cut their pay by moving them from twelve-month to nine-month contracts and sacking four of the forty-four members.

The chorus announced their ballot result with an outdoor performance of Hail Poetry from Gilbert and Sullivan’s The Pirates of Penzance.  An Equity spokesperson said, “The plans by English National Opera management amount to cultural vandalism as they are threatening the future of a world-class Chorus and as a consequence the viability of ENO itself. We have no alternative than to ballot on industrial action, which could result in strikes and cancelled performances.”

The new contracts would require the chorus to be in attendance from 9.30 in the morning to 11 at night, seven days a week. That would make it impossible for chorus members to supplement their income as they have traditionally done by teaching or freelancing.

The chorus will take action between 4 and 19 March, to include protests and refusing overtime. The strike action, for which the vote was unanimous, will be in the first act of four in the new production of Philip Glass’s Akhnaten, on 18 March, the last night of its run.

The English National Opera makes a point of performing all its productions in English, and though internationally acclaimed, has been the target of government cuts for many years. Singers believe that management clearly has a political agenda and that the new chief executive, Cressida Pollock, was appointed a year ago with a brief to carry out the cuts.

The contract changes and consequent pay cuts are being spun by ENO management and its masters at the Arts Council as inevitable after the Arts Council announced in 2014 it was cutting the opera company’s annual funding by £5 million – or 30 per cent. Management is also claiming that the pay cuts would be of the order of 17.5 per cent. In fact, chorus members point out, the impact would be a cut of at least 25 per cent, and more likely to be up to 39 per cent. Alternative proposals to ENO management have fallen on deaf ears.

The chorus have attracted widespread support, both from their fellow singers, musicians and eminent figures in the opera world, and from opera-goers.