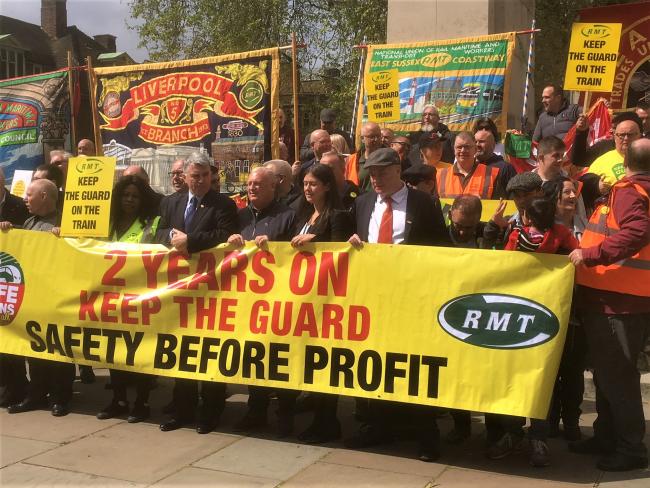 In for the long term fight, RMT members demonstrating in April 2018 to keep guards on trains. Photo Workers.

The government is considering a legislative attack on the rail unions and is poised to draw up laws requiring minimum numbers of rail staff having to work during a strike. The legislation would make any industrial action illegal if those levels are not met.

A strike to be a strike requires wholesale withdrawal of labour. A union is not a union if it negates its own action. Yet this law aims to intervene decisively in class struggle to favour the interests of the employers.

‘This law aims to intervene in class struggle in the interests of employers.’

Such a law would neuter the effectiveness of organised working people to defend their jobs, pay and working conditions – theirs is the real “levelling up” agenda, indeed it is the only one in town.

This proposed act is no more than a strike-breaking tactic. It must be opposed by everyone: if enacted its scope will not stop at rail workers but in time will spread further to other sectors. RMT fully recognises this; general secretary Mick Lynch said, “Any attempt…to make effective strike action illegal on the railways will be met with the fiercest resistance from RMT and the wider trade union movement.”

The greedy temptation of the employer class will be to make the restrictions universal. Their mentality never changes – from the 1799 Combination Act banning trade unions, followed by many later attempts to cripple working class power and through to the 1980s Thatcher anti-union laws which in essence still handicap us.

The anti-worker nature of employers has never really disappeared or changed; it keeps bubbling up to the surface whenever workers drop their guard.

The rail unions, and in particular the RMT, are fighting valiantly in adverse circumstances to protect their members’ interests, which is what trade unions are for. Attempts by the government to scapegoat them will hopefully fail.

But if this class-based law does reach the statute book, then unions will have no choice but to raise the political level of their members and still bring out on strike all in an affected sector in order to make action effective.

History teaches us that laws cannot always be upheld if they are designed to keep the people in check. In that circumstance, bad law must be ignored and undermined. Workers acting in such a situation would not be outlaws for that designation would only apply to those making dictatorial rules.

Slowly it is dawning on many more people that decision after decision of the Johnson government shows its craven fawning to the interests of big finance capital and big industrial monopolies while undermining Britain’s independence. As is the case again in the rail industry.

The actual practice of this government is to level down, to depress our aspirations. According to government, working people must be paid less and, have worsened working conditions and pensions. This is not Brexit; this is not the independence that people voted for in 2016. People must make their wishes felt.

The rail unions need our support and the government is on the wrong side of history.