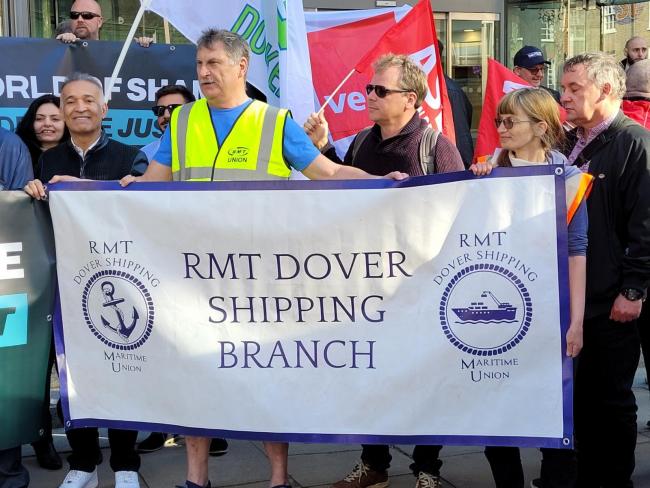 RMT and Nautilus International, the trade unions representing workers sacked by P&O Ferries, continue to fight the sackings. They have held a series of rallies at ports around the country, including Dover, Liverpool, Hull, Cairnryan and outside the London offices of DP World, P&O’s Dubai-owned parent company.

The 800 workers were sacked on 17 March by a Zoom call with thirty minutes notice. Replacement crews with cheaper foreign labour (paid on average £5.50 an hour) had already been hired through agencies.

P&O’s heavy handed tactics continue. On 30 March 40 cadets were ordered to disembark and await further instructions. The cadets, future workers in our maritime fleet, report that their requests for return of belongings left on board go unanswered.

Two of P&O’s ferries on the Dover-Calais route, the Pride of Kent and Spirit of Britain, have been seized and forbidden to sail by the Marine and Coastguard Agency after inspections found a number of safety deficiencies on those vessels. This has contributed to congestion around the port of Dover.

On the European Causeway, serving the Cairnryan-Larne route, the MCA found 31 infringements of regulations on training, fire safety and lifeboat drills. According to media reports, seven of the agency workers have been sacked for having alcohol while on duty.

This week inspectors from the International Transport Workers' Federation (ITF) have been refused access to check on the welfare of the replacement crews, after these had raised concerns. ITF inspectors have the right under the International Ship and Port Facility Security Code to enter all UK ports and board all vessels in UK waters where seafarers request assistance. This is a legal obligation on all states signed up to the International Maritime Organisation convention under which the code was introduced; this includes the UK.

P&O’s Chief Executive Peter Hebblethwaite said at a session of the House of Commons Transport and Business, Energy & Industrial Strategy committees that the sackings came about because “P&O has lost an unsustainable amount of money”. In reality, P&O has ordered two new super-ferries, 230m long, to be made, not in Britain, but in a Chinese shipyard, at a cost of £220 million.

DP World is owned by the UAE government, yet receives subsidies from British taxpayers for the Hull-Rotterdam route, and tax breaks in the London Gateway and Southampton “freeports”. Trade unions are forbidden in the UAE.

Last year Irish Ferries started to run a service on the Dover to Calais route, employing agency staff paid below the minimum wage and working longer hours than staff employed by other operators. Nautilus International warns of a “return of the toxic work culture and practices of ferry operations in the 1980”, which led to the death of 193 passengers and crew in the 1987 MS Herald of Free Enterprise disaster.

Follow the action on RMT and Nautilus International websites and their social media feeds.