Poverty and riches - the sad tale of Britain's food 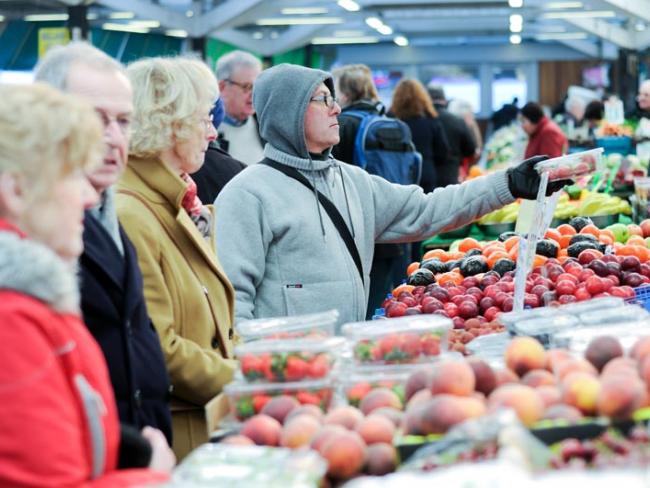 How can an island with an ideal climate for growing food be so dependent on imports on the one hand, and have so many millions of its people living in food poverty on the other?

For the first time in over forty years, Britain will be free to decide its future food strategy when we leave the EU. Yet so far what government and the food industry have come up with fails to rise to the challenge. Should the focus be on trade, or on production? A recently published first part of the National Food Strategy (see page 14) notably fails to provide the right answers.

War, disease, economic crises and natural disasters can expose hitherto unseen vulnerabilities in a nation’s political economy, nowhere more so than in agriculture and food production.

When Kipling wrote his poem Big Steamers shortly before the start of the imperialist world war of 1914-18, economic historians calculated the British population’s total annual consumption as 52.5 billion calories. Of this a mere 21.4 billion were produced at home.

At that time British capitalism relied on vast imports from the colonies and dominions, a strategy vulnerable to naval blockade. In 1916 the German high command’s intensified campaign of submarine attacks on shipping coincided with poor harvests in Britain, and in North America, our main suppliers of grain.

In the same way, the Covid-19 pandemic and the measures adopted to control it exposed the fragility of our 21st–century food supply. The supermarkets, which had created “just-in-time” supply chains, saw these unable to meet the need.

Shortages of basic foodstuffs occurred. Supermarkets imposed rationing. Flour mills, for example, continued to produce flour, but could not get it to the customer, because demand for the small bags in which flour is sold in supermarkets far exceeded supply.

Panic buying no doubt took place, yet the problem was not that supplies were insufficient: it was that distribution systems could not get material to customers. The government was considering introducing official rationing. War economies may have lessons for us after all.

An island is peculiarly vulnerable to blockades. The extent to which it can withstand them depends on how self-reliant it can be. Take fruit and vegetables: these items make up our biggest trade deficit in food.

Thirty years ago, 83 per cent of the vegetables we ate came from the UK. Now it is 54 per cent, says the National Food Strategy. The Food Foundation estimates that we could increase the amount of tomatoes, cucumbers, onions, lettuce, mushrooms, peppers, spinach, courgettes, cherries, broccoli and cauliflower we grow here, and reduce our dependence on imports.

In fact, advances in agricultural science, along with public health measures such as better housing, water supply, sanitation and immunisation, had more to do with the end of famine in most of the world.

‘Some blithely suggest that the market will provide…’

The advocates of “liberalisation” in any case have a curiously selective approach. Your tariffs are a backward restraint on trade, mine are necessary protection for a vital industry. British imperialism fought the Opium Wars to bring the benefits of free trade to China: to destroy their industry and turn an independent country into a dependent market for goods.

The history of free trade, that is to say of capitalism, gives the lie to their approach. In the Irish Famine ships full of grain sailed out of Irish ports while the peasants died. How well did the market meet their needs?

The potential for changing food production for the better is ignored by the free traders. And the question of the ownership of the means of production and distribution is ducked.

We cannot afford for our land to be in the hands of foreign investors or hobby farmers. The big supermarket chains - the US-owned Asda, Morrisons, Sainsburys, Tesco, and the German budget chains of  Aldi and Lidl, and the UK’s Coop, control food distribution with a market share of over 90 per cent.

Could we do better?

Science and research have a major part to play: food science, soil science, agricultural research can all find solutions. Computer models developed in astrophysics can have applications in studying crops and understanding how best to plant in the future, for example.

In the Second World War county and district agricultural committees brought together the interested parties to ensure production was directed towards the national goal of feeding a nation at war: a better model than commissions of cronies, and a better way to enforce standards of welfare and hygiene – remember the EU never accepted these. Those who wanted to control the live export of animals to the continent found themselves at loggerheads with the four “freedoms” and the European Court of Justice.

Some 2.2 million British workers live in what is called food poverty (sometimes called food insecurity). In early April that figure rose to over 8 million who reported food insecurity in the previous five weeks. Food bank usage increases year on year, with 1.6 million people needing one in 2011-19.

The problems of poor diet and obesity-related diseases are a direct result of low wages. Trade unions must turn their attention away from the myriad distractions they have allowed to occupy their attention, and focus once more on the fight for wages.

Charity did nothing to solve famine in the nineteenth century, though it may have allowed the church-going members of the bourgeoisie to assuage their consciences. Food banks are their modern equivalent. They tackle a symptom, not the cause of the disease.

The same can be said for all the tinkering with benefits systems, or anti-working class fantasies such as Universal Basic Income (UBI) – the telling word is “basic”. If our diet is poor, and we accept that the reason for it is poverty, then the solution is not to hector people about their “food choices” but to tackle the problem of poverty.

It is no coincidence, surely, that the rise of the food bank coincides with a fall in trade union membership – and the phenomenon of trade unions, in the main, deserting the struggle for jobs and wages for other modish concerns: the “rights” of an ever proliferating kaleidoscope of minority groups, opposition to popular democratic decisions, struggles on the other side of the world…the list goes on.

With thought and application we could ensure that every man, woman and child could rely on a secure supply of affordable nutritious food. No one else will provide it.

• Related article: Not what we need…

Abattoirs under attack
Bouncing back: the return of British fruit [print version]
A reservoir of fruit genetics [print version]
Food - we need a long-term plan
We are Cuba!