'Reclaim our time' in uni fight 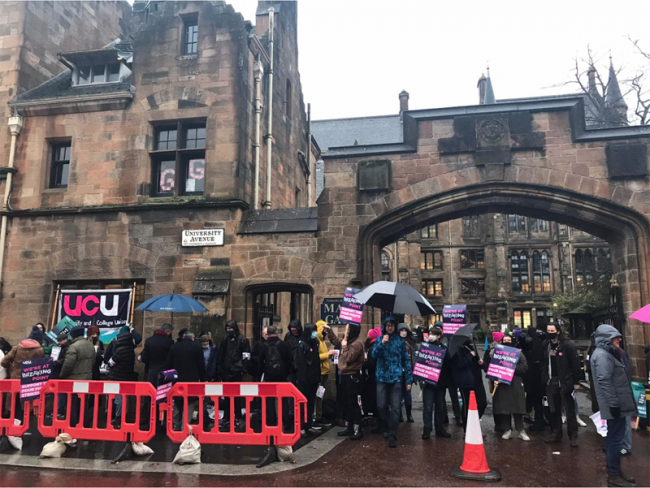 The picket line at Glasgow University on 1 December. Photo Workers.

﻿After three days of national strike action members of UCU, the university workers union, have now moved to a “reclaim our time” campaign underpinned by a form of working to hours.

Most higher education contracts specify a nominal working week of 35 to 38 hours. Many academic staff may also be contractually expected to work beyond those hours as reasonably requested by their line manager.

In fact, the average working week in higher education is now above 50 hours, with 29 per cent of academics averaging more than 55 hours. A UCU survey conducted in December 2020 saw 78 per cent of respondents reporting an increased workload during the pandemic.

The action will expose how much of workers’ own well-being and free time is regularly sacrificed just to keep the system that exploits them afloat, forcing managers to confront the unsustainable and dangerous amounts of work imposed on their staff. In this way, overwork is made a managerial problem.

The union is linking pay, equality, workload and casualisation in one dispute. The Four Fights dispute is about demanding fair treatment for staff across the sector and a comprehensive remedy for the way in which university staff working conditions have been worsened over the past decade. The combination of pay erosion, unmanageable workloads and the widespread use of insecure contracts has undermined professionalism and made work more stressful for staff.

The solution really isn’t difficult. University income from international students has soared. There is enough money to employ sufficient properly paid staff on secure contracts. Instead, universities have been desperately competing with one another by spending billions on new buildings for ever greater expansion. Staff are now putting the pressure on to reverse that trend.