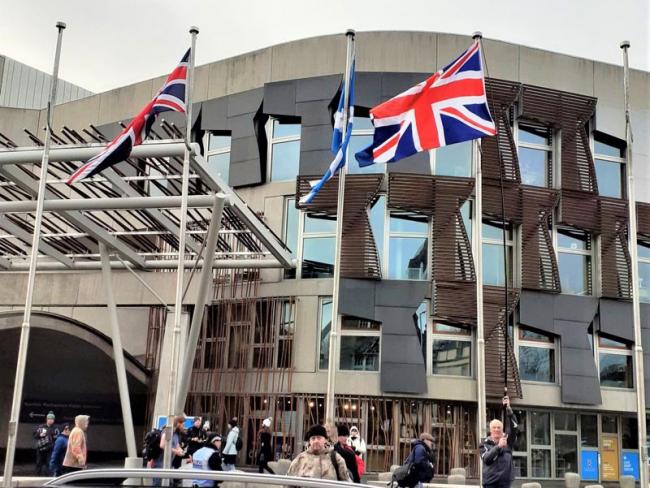 Opponents of separatism raise the union flag outside the Scottish Parliament. Photo Workers.

On 20 February the Scottish Parliament in Edinburgh passed legislation that for the first time allows foreign nationals to vote in elections that are held in Scotland. It means that foreign nationals - including refugees – can now vote in both Holyrood and local council elections. The SNP proposals to change the law was supported by Labour, Green and Liberal Democrat MSPs.

An attempt to extend voting rights to asylum seekers was not adopted – but with pressure from the Scottish Refugee Council and other campaigners, this may be added later.

This act of the legislature in Edinburgh follows similar moves by the Welsh administration last year – the Cardiff assembly gave the franchise in Welsh elections to anyone legally resident. Like the Scottish move, it is intended to ride roughshod over the ending of voting rights for European Union citizens living in Britain now that the UK is exiting the EU.

The Holyrood administration may try to apply this franchise legislation to any future Scottish separation referendum, which it is now seeking. This would happen if a weak central government in the future devolved such authority to Holyrood – in the way that David Cameron did for the 2014 Scottish referendum.

All of this can be traced back to the undermining of the 2014 defeat of separatism, and thereafter, when more powers were promised to the Scottish parliament. The current campaign by the Labour Party, the Scottish TUC and other separatists for “more powers” and “federalism” is a recipe for creating an outpost of the EU within our society, with similar calls for regional separation now spreading to England.