SNP and Greens: a coalition born of weakness 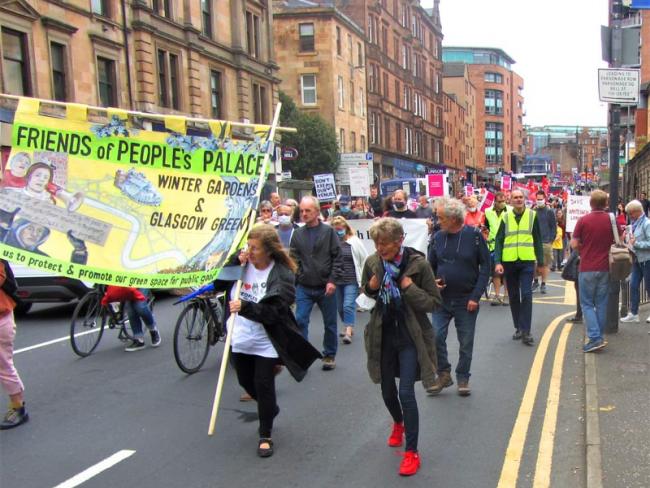 31 July 2021: Opposition to spending cuts in SNP-run Glasgow brought hundreds out onto the streets. Photo Workers.

Dubbed a “coalition of chaos”, the new alliance in August between the Scottish National Party and the Scottish Green Party has been born out of desperation, out of weakness. Seeing no way to legitimately induce the British government to grant the separatist cause another referendum on breaking up Britain, an artificial majority has been created in the Holyrood parliament by pooling the resources of the two underperforming separatist parties.

These parties are not only a threat to the integrity of the British working class, but are vociferously campaigning on a vision of re-joining the European Union. Indeed the draft cooperation agreement said the deal was aimed at “accelerating Scotland’s journey towards democratic renewal and independence in Europe”.

The SNP aim of pressurising the British government to agree to another referendum on Scottish independence was thwarted as they failed to gain a majority of the 129 seats at the elections for Holyrood in May. The Scottish Green Party seats are enough to create a voting majority.

With this new alliance the demand for another referendum will become more confident. They speak of a timetable of “within five years” and “preferably by Autumn 2023”. Whatever the timing, they have kick-started a renewed campaign for separation. No one who values the unity of the working class and a united independent Britain can now ignore it.

But several issues could derail separatist plans and the alliance. Alex Neil, the dissident SNP former cabinet minister, pointed to the party being wounded by this alliance, describing the agreement as “the death knell of the SNP ever getting a majority in the Scottish Parliament”. And many rural SNP MSPs have campaigned hard for new and upgraded roads – a policy strongly opposed by the Greens.

The old slogan “It’s Scotland’s Oil” reminds us that there is a strong lobby for oil and gas development within the SNP (it was once seen as the golden purse for a separate Scotland). But Scottish Greens want the shutdown of all North Sea and near Atlantic oil and gas activity. Meanwhile, no new nuclear power construction is permitted by the Scottish government.

‘The Greens also seek to curtail many aspects of agriculture…’

The Greens also seek to curtail many aspects of agriculture, including the large salmon farming output which forms one of Britain’s biggest food exports. And bodies like the Scottish Fishermen’s Federation are wary of their ill-conceived headline-grabbing policies. Meanwhile, the Greens and SNP continue to wrangle over the divisive proposals for gender recognition reform and the curtailing of free speech underlying the Hate Crimes Act.

The run-up to the COP26 climate conference in Glasgow in November will no doubt be used by the SNP and the Scottish Greens to undermine the British government intention to portray the event as a UK-wide project and to gain publicity for their separatist and pro-EU views.

Yet the most damning issue for this SNP-Green alliance is the economy. Scotland’s public spending deficit more than doubled in 2020. Spending increased and revenues fell due in part to the coronavirus pandemic. That’s true everywhere. But it’s far worse in Scotland.

The 2020-21 deficit was published in August. It is estimated at £36.3 billion, 22.4 per cent of GDP – a huge leap from to 8.6 per cent a year earlier. In contrast the current UK figure is 14.2 per cent. It has been hard for pro-separatist critics to dispute the figures. They were published by the Scottish Government’s own statisticians in the annual Government Expenditure and Revenue Scotland Report (GERS).

Public sector spending increased by 21 per cent in Scotland to £18,144 for each person, £1,828 more than the UK average. And yet again – as with the failing Scottish banks – the taxpaying workers of the whole of Britain pick up the tab.

Public sector spending by itself is not a bad thing, of course, but the SNP’s spending plans contrast with its inability to create growth and real jobs, especially under the constraints of their Green Party partner’s zero growth ideology. It would be tough to establish a new country with such a record of deficit. Could it afford to borrow? Who would lend?

With such a past, and a zero growth partner, all previous separatist economic plans have been rendered obsolete. Joining the EU won’t help – it has only temporarily set aside its tight fiscal rules.

The GERS figures are seen as so bad for Scottish separatism that several pro-SNP pundits want to curtail their methods and publication in future years. Others like Scottish Finance Secretary Kate Forbes have tried to front it out. In response to the GERS report she claimed that if only Scotland were independent and had more borrowing powers, then a bright economic future lay ahead.

Some economists disagree. “The current GERS figures again highlight the sheer folly of the SNP’s independence plans and the huge costs and disruption they would impose,” commented Ronald MacDonald, an economics professor at the University of Glasgow.

Macdonald added, “With such a large external deficit, financial markets would from day one of independence, if not before, be expecting an abandonment of sterlingisation and a move to a sharply devalued Scottish currency at around 20 to 30 per cent.” He underlined the importance of pooling and sharing fiscal risk in Britain.

Scotland’s First Minister hit the headlines in August when she sent a letter to prime minister Boris Johnson demanding he reassess the Cambo oil and gas field project’s licence. So the SNP has moved from proclaiming oil as the engine of independence to aligning itself with the view of its Green allies by opposing the new field and any extraction from it.

Cambo, 78 miles north west of the Shetland Isles, is one of two fields on the Corona Ridge Area, which has estimated reserves of over 800 million barrels, a valuable strategic resource. It was first discovered in 2002; permissions long predate the current dispute.

Deirdre Michie, chief executive of Oil and Gas UK, pointed out in The Scotsman that if the Cambo field were abandoned, the whole of Britain would still need oil and gas but instead “we would have to import [them] from overseas – frequently from countries with higher emissions and less commitment to act on them”.

‘All previous separatist economic plans have been rendered obsolete…’

Michie said that over 100,000 jobs would be threatened by such an abandonment, particularly in the north east of Scotland, but not just there – there are workers in the industry all over Britain. The industrial strategy documents of the GMB and Unite trade unions, and the work of the Offshore Co-ordinating Group, give some hope that there can be resistance to this destruction of a strategic industry.

There’s also opposition by workers and local communities against cuts and closures in cities governed by SNP and SNP-Scottish Green Party councils.

Glasgow is among the ten worst-hit cities in the UK for cuts. Glasgow Against Closures has brought several local campaigns against library closures together with seasoned campaigners opposing closures of venues like swimming baths, community centres and museums such as The People’s Palace and Winter Gardens.

The semi-privatised culture organisation, Glasgow Life, has taken advantage of the Covid crisis to not re-open a number of such venues and is planning to privatise other previously publicly owned buildings. Over 500 jobs are being lost as a result.

In July this encouraged several trade unions and their members to attend the first large march and rally that Glasgow Against Closures organised. Several hundred attended and there was a festive atmosphere at Glasgow Green – with not an SNP flag in sight.