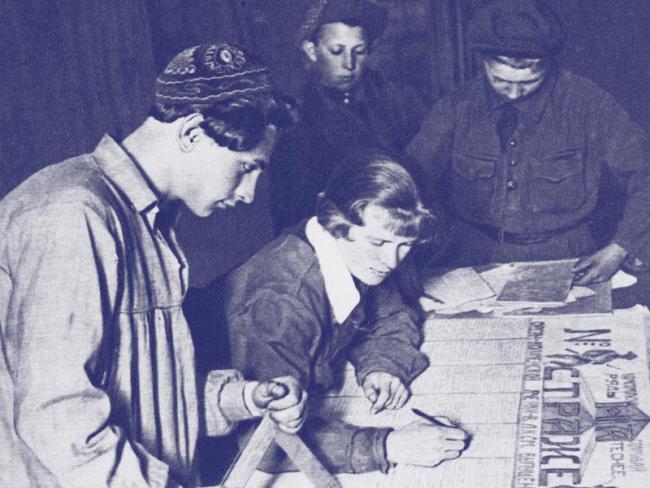 Editing a newspaper on a collective farm. The picture is taken from The Land Without Unemployment, published in Britain by Martin Lawrence in 1931.

Which shall it be: planning, to enable people to free themselves from ignorance, poverty, unemployment, disease etc, or the free market with its greed, stupidity, bigotry, exploitation, ignorance, unimaginable wealth together with incomprehensible poverty and degradation? The clash between these ideas created the politics, economics and wars of the 20th century, and also the European Union – capitalist club and bulwark against communism.

And of course you can have planning under capitalism but planning is a class question. The test is: For whom and in whose interest?

The Great Breakthrough was the launch of the first five-year plan in the Soviet Union in 1928. It was the deliberate, scientific attempt to move the frontier beyond capitalism and to try and build the first planned socialist economy in the history of the world.

The USSR – the Union of Soviet Socialist Republics – was established after the defeat of a 14-nation intervention that caused the collapse of civil society, brought famine, disease and barbarism, and killed and impoverished millions of people.

What was the USSR? Under Stalin’s direction, more than 60 distinct nationalities and dozens of smaller national groupings gained freedom of language and cultural development, and equality in such matters as military, administrative, industrial, educational and technological development. The Soviet Union united and developed its peoples as never before.

Civil war in the Party

Enemies of communism, Left or Right, said this was a workers' revolution in the wrong place at the wrong time with no prospects of success. In the Soviet Party there was an incomprehensible cacophony of factionalism and windbagging – of ego and self-interest versus class unity and cohesion. The Opposition, Left and Right, had to be defeated before the Party could move on – to build socialism.

Stopping the civil war in the Party meant being able to move on, to build socialism. The need was to “remake everything: to organise things so that everything should be new, so that our false, filthy, boring, hideous life should become a just, pure, merry and beautiful life”, as the Soviet philosopher Blok described the meaning of the Russian Revolution.

1928 and the first Five Year Plan crossed the frontier from the capitalist world into uncharted lands of building socialism. This meant crossing the barrier in our heads from capitalist culture to something new, leaving behind the past and seizing the future.

Meanwhile, 1929 saw the greatest failure of capitalism in the world until the recent banking crisis of 2007-2008. The leading capitalist countries’ economies collapsed, while the Soviet Union was building. The economies of the USA didn’t recover until 1940 as world war loomed.

To take the USSR from the 16th century into the 20th century, agriculture had to be collectivised, resulting in a brutal civil war in the countryside as the rich peasants fought the socialist revolution and withheld food, creating famine and starvation, and challenging the very survival of working class power and control.

Many mistakes were made, but the policy was ultimately vindicated: the USSR could feed itself, capital was raised to assist industrialisation, and the peasant of the 16th century became the Soviet citizen and worker of the 20th century.

Every attempt at building socialism has followed some kind of planned model – in China, Cuba, Eastern Europe and Vietnam. Success depended on the objective conditions of the level of development, the starting point of productive forces, the level of underdevelopment, the scale of interference and reaction, internal and external.

Stalin described how socialism would further develop workers and enhance the quality of life: “First of all, to shorten the working day at least to six, and subsequently to five hours. This is needed in order that the members of society might have the necessary free time to receive an all-round education. It is necessary, further, to introduce universal compulsory polytechnical education, which is required in order that the members of society might be able freely to choose their occupations and not be tied to some one occupation all their lives. It is likewise necessary that housing conditions should be radically improved, and that real wages of workers and employees should be at least doubled, if not more, both by means of direct increases of wages and salaries, and, more especially, by further systematic reductions of prices for consumer goods.” (from Economic Problems of Socialism in the USSR)

So what do we need in Britain today? Capitalism is seeking to destroy all threads which bind us together as workers, all our historic strengths, all our weapons of resistance. By us saying no to this, this is not for us, we start putting up the barricades against their attack.

In all sectors of Britain workers should identify and demand the establishment, more likely re-establishment, of the core infrastructure for the progressive and civilising society that we need and want:

1. Planning for need not bureaucracy.

3. Core industries to make Britain self-sufficient, self-reliant and independent – steel, coal, gas, nuclear, chemical, utilities etc. Plan for manufacturing, engineering, textiles etc – what do we need to make and where? A new integrated transport infrastructure. End the idiocy of an island with no fleet and no fishing industry.

4. A plan for agriculture and the countryside.

5. A housing plan to resolve homelessness and bad housing.

6. A complete transformation of all services – healthcare, education, finance, etc.

If we are to survive here then we need to be clear: working class power to rebuild the mess capitalism has left us after all their years of failure is essential. It means reasserting Marxist thinking in our own ranks – in the unions, in the wider working class. A belief and confidence in ourselves as we once again push the capitalist frontier aside.

That is the great breakthrough we as a class must make in Britain.

This article is an edited version of a speech given at a CPBML public meeting in November 2015.