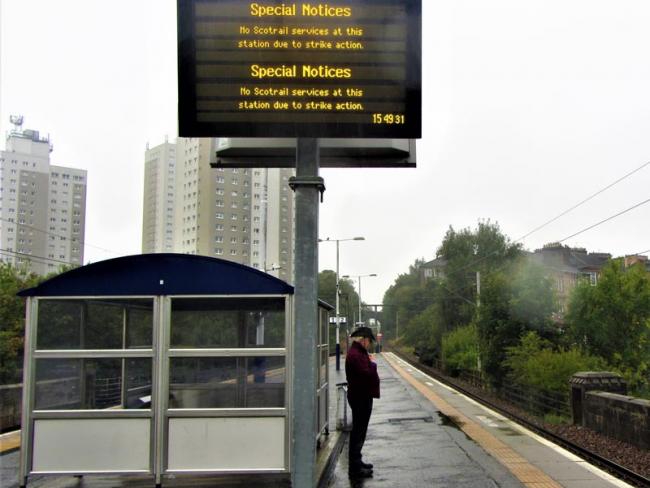 * Since this article was written the RMT and ScotRail have settled a one-year agreement with ScotRail for a 2.5 per cent rise backdated to 1 April 2021, plus a one-off COP26 payment of £300 and other improvements. The planned rail strikes will not now go ahead.

Road closures and police cordons reminded people in Glasgow of the reality of hosting the city’s biggest ever gathering, the COP26 climate conference. At the same time disputes between workers and the SNP-led city council and the wider SNP–Scottish Greens coalition were reaching boiling point, threatening to disrupt proceedings in a city already struggling to save its reputation from litter strewn streets and soaring drug related deaths.

The RMT union has persisted in its long running campaign for better wages and conditions. With over 30 Sunday strikes since March, momentum has grown. In a mid October ballot of over 2,000 members across all grades, 84 per cent voted in favour of industrial action between 1 and 12 November during COP26.

With the lack of hotel accommodation in the city some visiting delegations are having to stay as far away as Newcastle. The absence of trains would add to the difficulties of attending, on already clogged roads. Strike action by Unite union members is also scheduled after around 1,000 workers in the Stagecoach Group voted to support it. This would affect bus travel in central Scotland.

GMB union members in Glasgow also voted overwhelmingly (96.9 per cent of returned ballots) to strike from 1 November. Over 1,500 workers in Glasgow City Council cleansing, refuse collection, school catering and janitorial jobs are involved in this Scotland-wide pay dispute. Chris Mitchell, GMB Cleansing Convenor in Glasgow, had a clear message for the Scottish Government and local councils: “We were called Covid heroes and essential workers. This is when low-paid workers take a stand against [the councils] and say enough is enough, because these heroes deserve a pay rise. Stand with us, not against us.”