Strong support in Glasgow for university pay and pensions fight 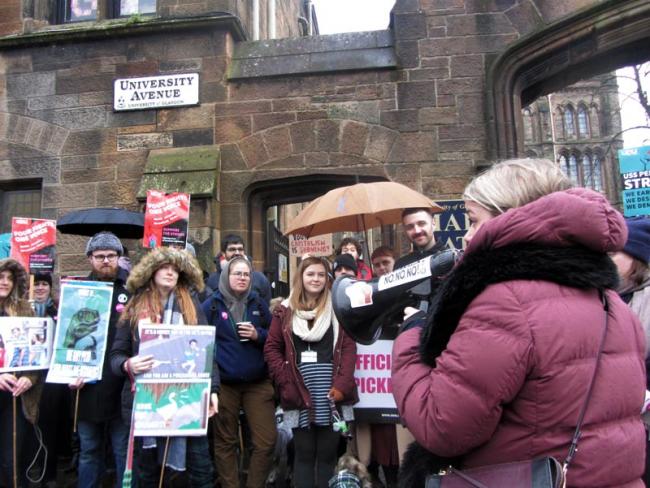 Despite the rain, pickets were out in force yesterday for the Monday morning picket at the University of Glasgow. The University and College Union (UCU) General Secretary Jo Grady visited the picket line with words of encouragement, and strikers from several universities and colleges later converged at a rally in Glasgow city centre where she spoke again.

They were among 12 universities and colleges in Scotland joining with another 48 from across Britain involved in strike action which began on Monday 25 November and ends on Wednesday 4 December. Among UCU members in the higher education sector in Scotland taking part in the ballots, 78 per cent voted to strike over the issue of Universities Superannuation Scheme (USS) pensions and 73 per cent over the issue of pay and conditions.

The dispute centres on adverse changes to the USS and the employers failing to make improvements to pay, the gender pay gap, casualisation and increased workloads. A work-to-rule will begin to apply following the direct strike action.

The UCU Scotland Official, Mary Senior, welcomed the support that students have given to the action, saying, “strike action is always the last resort, but universities’ refusal to deal with the key issues of increased pension costs, pay and working conditions leaves no alternative. It is unbelievable that universities have not done more to work with us to resolve these issues.”

The National Union of Students Scotland has stated that the UCU action has the full support of the student movement.