Skip to main content
Home » News/Views » In supermarket wars, we are the first casualty

In supermarket wars, we are the first casualty 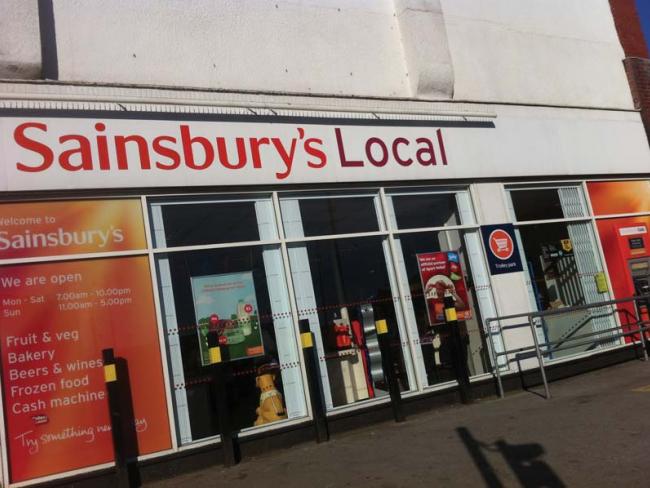 Sainsbury’s Local brand along with others such as Tesco Extra are attempts to drive out all independent retailing. Photo Workers.

There’s a toxic presence in Britain’s retailing, and it’s called capitalism. The drive to increase profits has led to low pay, waves of redundancies, zero hours contracts and intolerable squeezes on agriculture…

Out of the estimated 30.6 million people at work in Britain and Northern Ireland, just under one million are employed by the four major supermarket chains – Asda, Sainsbury’s, Tesco and Morrisons – with an estimated minimum of seven workers dependent on every one of those supermarket jobs in distribution, supply, food production, manufacturing etc.

With its myriad full-time, part-time, zero hours and fixed term contracts, this sector is gargantuan. Along with the rest of retail it distorts and perverts the employment and industrial infrastructure of Britain.

Napoleon described Britain as a nation of shopkeepers. A more up-to-date definition would be one dominated by huge companies waging a trade war with global ramifications characterised by vicious tactics, rivalry, and saturation of the market.

The life-and-death struggle between Sainsbury’s, Tesco, Asda and Morrisons is on the one hand about share in a market of about £270 billion. On the other hand it is a struggle to stop if not obliterate the threat from cheaper rivals Lidl and Aldi who are leading the EU penetration into Britain.

Small in British terms, these German-based companies are major players in the European Union. Strategies of the discounters like Aldi and Lidl may drive the big four to respond by price reductions but this is only a tactic until their rivals are seen off. Once the competition is destroyed, once they have secured the market, then by nature the companies will return to basics and look to maximise profit.

Tesco saw a 92 per cent drop in its profit for the first half of 2014, coupled with a major share collapse following exposure of its alleged accountancy scams and investigations from the Grocery Code Adjudicator into alleged unfair trading practices. At the same time it is also trying to capture markets in the US and China.

Since Asda is owned by the US Walmart conglomerate – portrayed as a “family” unless you join a trade union and expect something more than the minimum wage and a zero hours contract – you have the setting for multi-national companies clashing globally. Walmart versus the world with Asda as its British stalking horse.

Morrisons is struggling since it spread from its heartland in Northern England into London and the South East. With all the self-proclaimed big four moving into online grocery deliveries, a market estimated to be worth £17 billion. The big four are only the big four until either they eat each other up or until the peripheral raiders – Marks and Spencer, Co-op, Waitrose – steal a market niche.

Internecine rivalry between the companies and the battle for market share has led to every dirty trick of marketing. Product shrinking is common – you get less than you did previously, averaging a 25 per cent reduction, but the price remains the same or is increased. Packaging is changed to misrepresent the brand. Adulteration of food products through increased use of salt, sugar, water etc undermines the quality of food and contributes towards obesity. Likewise the promotion of junk food and fast food leads to obesity and other health-related issues.

Price wars to seize market share are wiping out producers. For example, the price of milk, which recently dropped through the floor due to a combination of the blockade against Russia restricting milk exports and the EU lifting the milk quota sales scheme, allowed the supermarkets to squeeze dairy farmers to the point of devastating dairy production not only in Britain but across the EU.

‘Cost reduction is not about returning benefits to the consumer – it is about increasing profit.’

So damning has been the criticism of supermarkets and their relationships to producers – especially farmers – and of the financial irregularities they enforce on their suppliers, that the Grocery Supply Code of Practice was introduced. This followed the revelation of Tesco’s accountancy practice of double counting that amounted to over £263 million, in which suppliers had also been subjected to bullying and intimidation.

There were incorrect deductions to payments to suppliers which could take months to correct; retrospective charges to suppliers going back several years; lump sum payments demanded in advance, and listing fees – whereby a supplier pays the supermarket for an advantageous selling position in the store; enforced changes to packaging of brands; and threats of sudden de-listing of products (effectively blacklisting) unless the price was dropped..

The Code of Practice aims to stop all these tactics, collectively described as blackmail and intimidation to force suppliers to reduce costs – reductions which are not actually passed on to the consumer because the supermarket can cross-subsidise products and cream off the surplus.

This legislation, which introduced another toothless organisation with minimal powers to fine or influence the supermarkets, was so delayed by the government in its passage through Parliament, that it could not be applied retrospectively to the behaviour of Tesco and friends.

The Tesco accountancy scam is under a tripartite investigation by the Groceries Code Adjudicator, Serious Fraud Squad and Financial Reporting Council. Do not expect any prosecution, only perhaps guidance on how not to do it again or at least not get found out!

Tesco responded with another tactic, announcing that it plans to rationalise its 90,000 product range. What clearer signal to producers that the war is now taking another turn? If you want to have your product sold then you’re going to have to be on the preferred list.

How do you get on the preferred list? Drop your prices. The offer of discounted products to consumers is just another squeeze on producers to justify maximising market share while disguising the real profit-gathering exercise.

On top of the battles with each other for market share and with producers to drive down the cost of delivery to the supermarket down (without reducing profit margins), all the big four are committed to cost reduction exercises over the next four years.

Cost reduction is not about returning benefits to the consumer – it is about increasing profit return to the shareholders. The first target is the terms and conditions of the workers employed. Final salary pension schemes are being closed. Companies are paying the national minimum wage or as little as possible above it as they believe they can get away with, dependent on the local supply of labour.

Other reductions come from continuous job re-defining, reorganisation, relocation of head office functions, breaking down jobs into packages of hours ensuring zero-hour contract employment, instability of employment, fragmentation of employment. All these practices mean great difficulties for workers in their lives and in their ability either to express their collective identity or to organise in a trade union.

Those who manage to join a union face enormous problems in finding an organising strategy through this swamp of disintegration. The GMB has had some success in dealing with Asda–Walmart, but it has to run faster and faster just to stand still.

The Groceries Code Adjudicator describes the supermarket sector as a “battlefield”. In addition to fighting against one another, against producers and against those employed by their own companies, supermarkets want to saturate the retail market and ensure that the nation of small shopkeepers is well and truly buried.

Large capital is ensuring that small capital is a distant memory. So the big four run their “extra” and “local” stores, supermarkets and hypermarkets, stores in petrol stations and motorway service stations, subsidiary labels. The uniformity across Britain’s high streets has been described as an “occupation” of local communities.

The big four are also big landowners. Apart from their stores, they own “landbanks” kept empty for potential out-of-town superstores. They are currently hoarding over 46 million square feet of land.

Many supposedly competing brands come from the same monopoly producers, just under a different label. The essentials of life are measured only by how much they inflate company balance sheets. Freedom of consumer choice? Freedom defined by the boardrooms of the big four supermarket chains with all their subsidiaries and secondary labels is no freedom for us.

Meanwhile the quality of the food chain in Britain has been under assault for years as reflected in the numerous food scandals – BSE, CJD, salmonella and so on.

A radical restructuring of food and grocery production, supply and delivery needs the removal of the toxic presence of capital in the food chain. Workers need to have a new and different plan for production and distribution around what we need and want on the supermarket shelves.