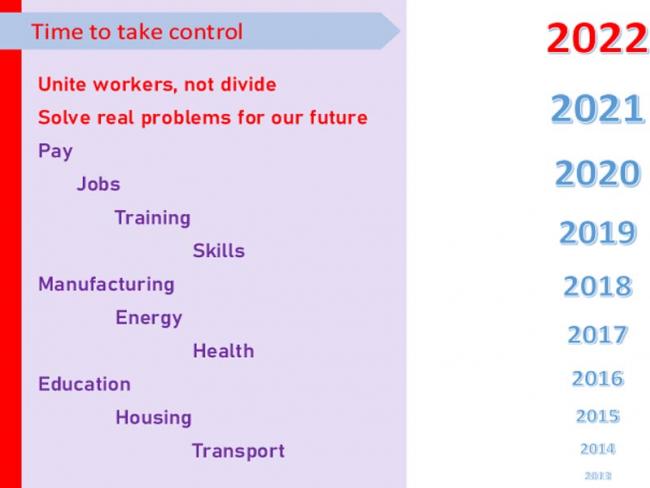 A new year lies ahead. Workers need to take stock of how far they have come as a working class, and how much still has to be done. The country embraced the intention to Take Control in the EU referendum of 2016. How are we doing?

The general election vote of 2019 signalled our determination to force through the 2016 decision in the teeth of massive opposition. Workers were clear about what they wanted and chose the most likely tool to achieve this. Then the government elected in 2019 interpreted Take Control to mean the establishment’s control of the country – not workers’. Of course.

Its “levelling up” agenda has turned out to be more a levelling down. The attack on the capital’s transport system. The cancelling of the eastern leg of HS2 to Leeds and the high-speed Manchester-to-Leeds line. The relaxation of migration rules for workers from across the world to fill skilled as well as unskilled labour shortages. The “free market” deals with Australia and others bringing threats to Britain’s agriculture. The abrupt termination of the contract with Valneva for the Covid vaccination due to be manufactured in West Lothian.

And so on. Now that we are (mostly) free from EU diktat, workers can begin to solve our country’s huge problems. Only as an independent country can we do this.

The establishment has continued to throw obstacles in the way. The promotion of non-materialist thinking (sometimes described as “woke”) is an attempt to sow division in our ranks. It characterises the nation as dominated by various forms of hatred, and preaches the elevation of all minority sections of the class as victims of the majority.

Under the banner of opposing hate, the concept of a non-criminal hate incident has been introduced, to be enforced by police, giving people a police record for thinking the wrong thoughts. This is true hatred: of Britain, of workers, of women, of class consciousness, of work, of science, of industry. Of real, materialist thinking. Even of human life itself, blamed for the destruction of the planet.

The great majority of workers clearly reject such self-hatred. Yet a climate of fear has been created for some – especially in workplaces such as universities where there is a nasty, accusatory working environment (such as ostracism for admitting you supported Brexit).

But people have been fighting back. In December Cambridge University dons voted overwhelmingly to assert that staff, students and visitors must be “tolerant of the differing opinions of others”. They have insisted that all views be debated. This reversed the proposal that all opinions (however ludicrous, presumably) should be “respected”, thus closing down open discussion and refusing to invite speakers who students might find upsetting. Most staff and students appear to have welcomed this decision.

Even the transgender-promoting Stonewall, which had “No debate” as its slogan, has now removed it. And the term “pregnant woman” may now be used rather than “pregnant person” in local health trusts’ advice for mothers!

Materialist thinking is being reasserted. In opposition to the unreal, what are the real, material problems in 2022? It’s a long list.

Workers have already exerted their power by beginning to fight for improved wages and conditions after many years of cuts to both. After a long period of decline, the number of workers in a trade union has risen every year since the Brexit vote in 2016. These are signs of a working class starting to flex its muscles to assert the need for a better life.

What kind of life do we want? If we are prepared to accept a worsening existence, then that is what we will get. Capitalism will not willingly give up its profits and control of the state.

So workers must take control themselves, assert unity by challenging anti-materialist nonsense, and identify how different areas of work need to improve to meet the needs of the country. A great goal for 2022!