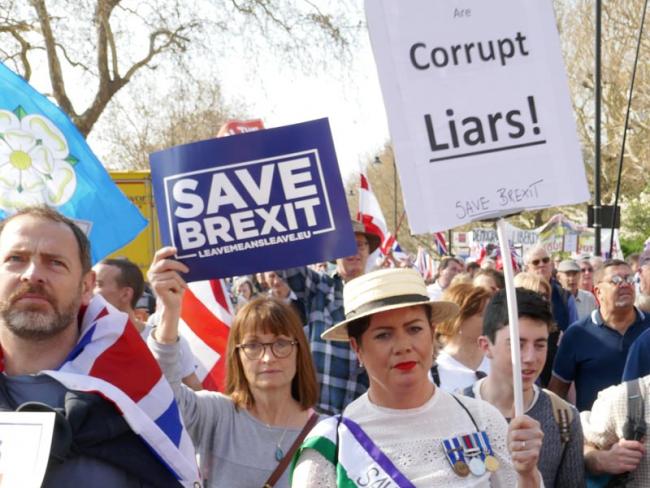 Marchers heading for Westminster on 29 March 2019, the first deadline for leaving the EU. Photo Workers.

The decision of the Supreme Court on 24 September, and the reaction to it confirmed the predictions we made at the start of the month (see below). We renew our call for workers to stand up for Brexit.

Nothing changes except the urgency of the situation.

Here is what we said…

Britain stands at a crossroads. Either we leave the European Union on 31 October, or an anti-democratic majority in parliament will find some way to force through their objective of unilaterally cancelling out the votes of 17.4 million people in the June 2016 referendum.

The aim of the wreckers is clear: to use parliament against the people. They must be stopped.

They say the vote for Brexit was all about bringing control and sovereignty back to parliament. Wrong. It was about bringing these things back to Britain. Only the people are sovereign.

As Workers goes to press, it still looks unlikely that the anti-democrats will be able to realise their dream. But never underestimate the lengths to which a desperate Establishment will be prepared to go. And they are, indeed, desperate.

Only extreme pressure could have led to Ken Clarke – a has-been NHS-wrecker – being touted as leader of a “government of national unity”. Only utter desperation has forced Labour and the Liberal Democrats, who understand party interest but clearly not the national interest, to even think of working together.

And as the deadline approaches, the desperation, the plotting, the construction of a coup against democracy will only get more feverish.

Meanwhile there is still a chance that the EU, seeing its bluff called, will try some fiddle with the backstop, most likely some empty form of words, to get their and Theresa May’s disgraceful Withdrawal Agreement through (see “May’s agreement: four reasons for No Deal”).

But whatever happens, or doesn’t happen, in one crucial respect the challenge before the people of Britain has not changed. And that challenge is to get involved, take responsibility. Stop sitting on the sidelines watching politicians carving up democracy. Above all, never think that we can sit back and leave it to the politicians to do the right thing.

Take up the challenge

That challenge must be taken up now. The greater the involvement, the greater the noise, the anger, the pressure, the more likely it is that we will have Brexit (and a clean Brexit at that). Silence now will only give heart to the extreme Remain rump.

Equally, the greater the involvement, the better placed we will be after Brexit to secure the independence of action that Britain will need to survive and prosper.

Despite the delusions of some, the people did not vote to leave the EU only to place ourselves under the domination of the US. We don’t want to escape the EU-inspired shackles of TTIP in order to bind them round our own wrists.

The British people want control. Control over our economy, our finances and taxation, our borders, our own standards on food, health, the environment and animal welfare.

But it’s not enough to want control. It will have to be seized.