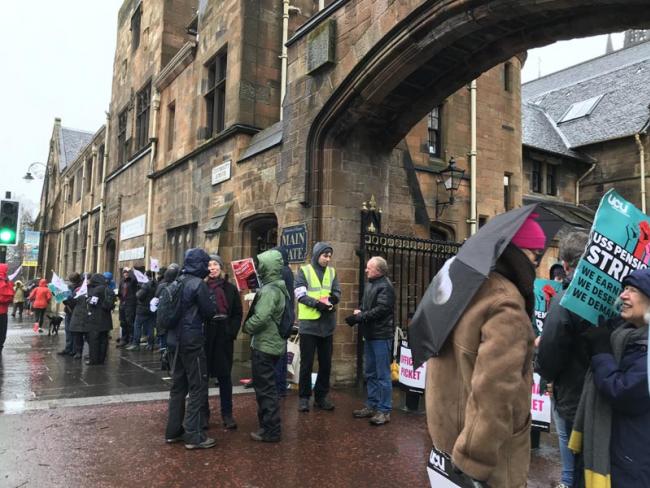 Before lockdown: Glasgow pickets out in force on 24 February last year as part of the universities pensions dispute. Photo Workers.

Universities staff are being forced to pay exorbitant pensions contributions solely because their scheme is making unrealistic assumptions about future investment returns – and they’ve had enough.

In the latest move, several thousand University College Union (UCU) members of the Universities Superannuation Scheme (USS) have signed a letter to the trustees of the USS slamming proposed changes to the Pension Schemes valuation assumptions. The workers argue that the changes will result in USS overcharging both pension members and the university employers.

The USS’s newly estimated pension costs reveal a change in actuarial valuation assumptions. The scheme is now projecting future costs ranging between 40.8 per cent and 67.9 per cent of the employers’ pension payroll – way above the already unnecessarily high rate of 32.9 per cent estimated in October 2019.

The publication of those projections in August 2020 sparked an immediate response from the UCU. It’s time, once again, to make a stand, it said, referring to the strikes that hit universities in February 2020, just before the coronavirus lockdown.

The UCU members’ letter says that these latest proposed changes in the valuation methodology have “little empirical or theoretical justification”. It was copied to the Pensions Ombudsman, members of the Work and Pensions Committee and Universities UK, which represents the employers.

In response the USS side has said, “Financial markets continue to signal that investment returns are likely to be lower in future than we expected in the past.”

The question to ask the USS side is rather than being caught in a “credit crunch” time warp, does it really believe that economic growth in Britain for the next 30 years will rest on the government paying a base rate (“gilt yield”) on its borrowings of 0.9 per cent a year? Long-term financial history going back over 150 years shows this to be nonsense.