Time to fight for pay 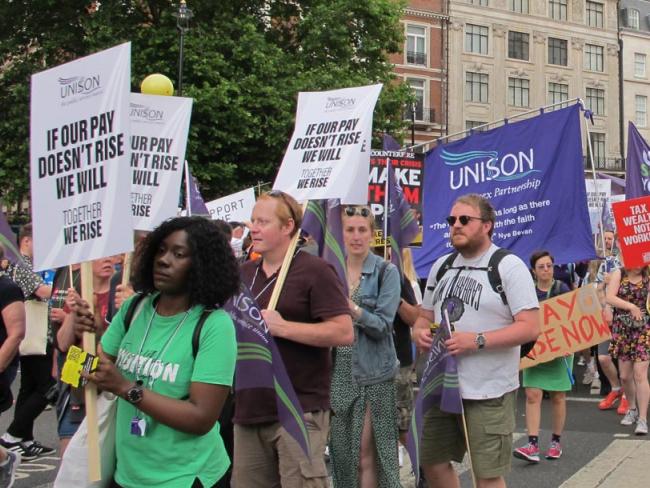 As inflation spirals upwards, more workers are lodging and fighting for pay claims. But too many are not; they fail to see themselves as part of a collective covering their trade, industry or job – and ultimately their country.

Whether or not it’s a result of Covid-related unemployment, last year saw the reversal of four years of (small) increases in union membership, with a particularly strong decline among women (see News, page 3).

At a time when price inflation is at its highest for decades, real wages are falling, and the need for collective struggle is greatest, union membership is at its lowest for a generation.

This feeds into a potentially lethal spiral for unions, and workers, whether members or not. Pay increases, especially those above inflation, are only ever won when unions take or threaten to take industrial action. And this is only ever effective if most of those affected by the claim are members, with very few exceptions.

Falling membership, then, fundamentally undermines unions’ ability to fight for higher pay. Worse, as well as workers not joining unions, some are leaving them to save money on union subscriptions.

What do we say to (for example) the long-standing Unison member who recently resigned membership in a large London hospital because “£18 a month [the union sub] is a week’s food”?

The more members who leave or new workers who fail to join, the less leverage there is on employers. The less leverage, the less chance of gaining a pay rise, which in turn encourages more workers to leave in an attempt to balance the books. It’s a vicious circle which could compound the decades-long decline in union membership.

Some unions have responded by not even formulating precise pay claims. Unison’s health claim seeks to be “inflation-busting”, whatever that might mean. And the Royal College of Nursing has, for the first time, formally withdrawn from the joint NHS unions pay claim to lodge its own. Disunity is weakness.

This will be difficult to turn around, but ways must be found. Workers and their unions must rediscover the plain tactical clarity of saying to the employing class, “If you put the bills up you must pay us more”. If inflation is 10 per cent our claims must exceed this.

But we must use our common sense. The “our claim is bigger than yours” farrago, for example in last year’s NHS pay “campaign”, where unions tried to get a pay rise by setting unrealistic claims, should be a warning. Failing to achieve such claims, often without any real campaign, just looks stupid and weak.

NHS employers have even realised that the prospect of continued pay decline in the service is literally life-threatening. Schemes to combat “in-work poverty” are burgeoning, with a number of hospitals now hosting food banks for staff.

'Unions must not be so wedded to "partnership working" that they fail to see their class enemies...'

Assertive unions should be imposing workplace control on timid employers. Unions could start by fighting to end employment practices they have tolerated for too long: privatised contracts driving down the pay and conditions of the lowest paid; using bank and agency contracts rather than paying proper overtime and unsocial hours rates; reliance on unpaid overtime and excessive working hours.

But that would not be enough on its own; we must find new ways to fight. Massive bargaining units and remote ultimate financial control are a barrier, as are the vicious anti-union industrial action laws.

New organisations are around, calling themselves unions but often encumbered with sectarian and anarchist approaches. Much as existing unions have rightly resisted their incursion, they teach an important lesson: boldness in taking on an employer can be a virtue, and it can succeed.

Unions must not be so wedded to “partnership working” that they fail to see their class enemies. Not the managers we negotiate with – they are workers and often union members too. But those who stand behind them are our enemies: the ruling class and its financial oligarchy who run this country in their own interest. They are class conscious alright: a lesson for workers who think that’s somehow in the past.