Trade, the new weapon of war 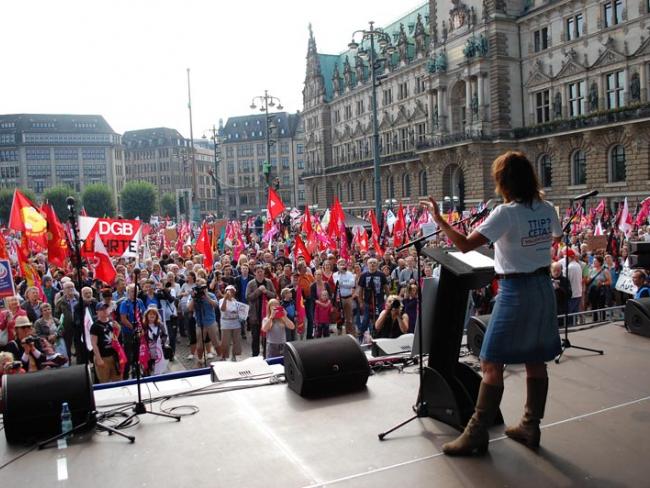 7 September 2016: 65,000 people turned out in Berlin, along with hundreds of thousands in Germany, to demonstrate against plans for TTIP. Photo Mehr Demokratie (CC BY-SA 2.0).

Both the USA and the EU force trade agreements on other countries in pursuit of economic and political domination. This book explains how, and why. And more importantly, how to beat them.

Its author, Yash Tandon certainly knows trade agreements inside out. Tandon is an experienced negotiator at international trade meetings, including those of the World Trade Organization (WTO), and he also holds honorary professorships at the University of Warwick and London Middlesex University.

The imperialist powers, says Tandon, are trying to impose trade agreements on every single country in the world. He argues that they represent the final stage in the complete takeover of the political sphere by the economic sphere. He writes, “Let’s not be mistaken about it: the real aim of all those supporting the imperialist trade agreements is to transform the whole of society into a single market where democracy and elected governments will have no meaning anymore.”

In Tandon’s view the WTO is no more than an agent of US and EU trade and foreign policy. He explains, “Its assumption that development is a by-product of trade is based on an untenable neoliberal ideology. There is no empirical evidence to support this assumption.”

Unfettered “free” trade does not iron out economic differences between nations: it makes them greater. Tandon points out, “Ironically, while the rich advocate free markets for poor countries, they practice protection, as…in the case of agriculture.” Discourse about “fair trade” is a red herring in the WTO context.

Smaller nations that do not “follow the rules” dictated by the big powers that control the WTO are both collectively and individually subjected to sanctions. Tandon says, “Sanctions are acts of war…the WTO – viewed in public media as a benign instrument of trade – is in fact a veritable war machine.”

Nor is the EU a force for good standing against globalisation. Tandon shows that “US and EU agricultural subsidies are a major factor in increasing hunger in the Global South.”

He points to a “a brutal change” by the EU in 2007, when it “…cancelled all the preceding agreements and attempted to impose on the ACP [African, Caribbean and Pacific] countries conventions called ‘Economic Partnership Agreements’ (EPAs). These EPAs are agreements of total free trade, liquidating all domestic market protection in the ACP countries.”

Tandon observes that “because of intense pressure from the EU (including threats of sanctions, such as cutting off ‘development aid’), most regions in Africa have signed the EPAs.”

In summary the mega-regional trade and investment agreements driven by the US and the EU are “…all institutional expressions of globalized fascism. Under the pretext of creating regulatory coherence to facilitate ‘free trade’, they are, in essence, instruments of global corporations under the hegemony of the United States.”

It is wrong, Tandon writes, to only ever blame the USA for these coercive agreements: the EU is equally culpable. He spells it out: “At the forefront of promoting the Trans-Pacific Partnership (TPP) and the Transatlantic Trade and Investment Partnership (TTIP) were, among others, the US corporate lobby, Business Europe, the Alliance for Responsible Commerce (ARC), and the EU Trade Commissioner.”

The only reasonable conclusion is that “…developed countries are not interested in the development of the rest of the world.” Tandon’s judgment is that “capitalism is unregulatable. It is essentially anarchic, and its major players – the transnational corporations and financial and commodity speculators – prefer an anarchic system which they can manipulate.”

Is there no hope then, no way forward? Yes, of course there is and Tandon spells it out: “the world knows that little Cuba has beaten the American Goliath. The American ambition to cage Cuba after the collapse of the USSR has been defeated. This is indeed quite remarkable. Cuba and Castro’s legacy continue to remain a beacon of hope for the countries and peoples of the South.”