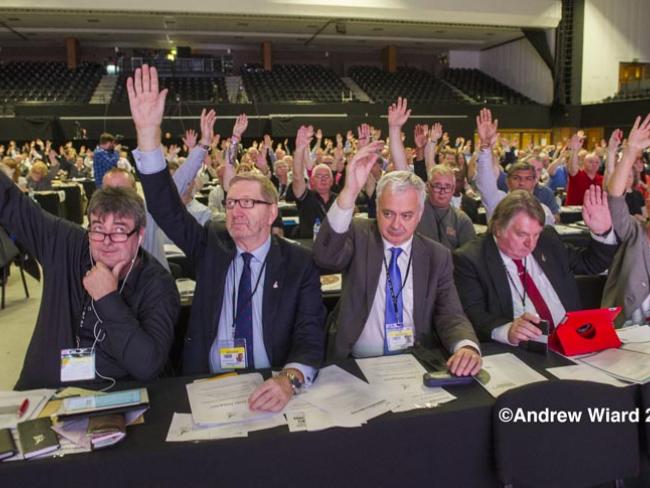 All those in favour…but is anyone noticing any more? Photo © Andrew Wiard 2015

Britain’s trade unions lost 275,000 members in the last 12 months, the largest annual drop in membership since comparable statistics were first collated in 1995. Total membership is at its lowest since the Second World War.

The number of workers in Britain is greater than ever at more than 32 million. Union membership in the private sector stands at around 13.4 per cent. Things look better in the public sector, with membership at 54 per cent. But since 2015 155,000 trade union members have been lost in education alone – a direct result of academies and privatisation of education. While there are still 6.5 million workers in trade unions, not all are affiliated to the Trades Union Congress.

It is projected that by 2020 public services will be provided more by private than by public sector workers. This is in line with George Osborne’s statement in 2010 (when he was Chancellor) that he would reduce employees of the state by 50 per cent within ten years.

There is already an increasing number of workers from the private sector delivering public services. So we no longer have a National Health Service but instead we have “National Health Service Providers”. The brand remains but the wolves have slipped in amongst the flock. These changes in terminology are fundamental to a change in thinking.

The contradiction among the three biggest trade unions – Unison, Unite and GMB – is that they are now all competing to recruit the same pool of workers, all unsuccessfully. They are becoming general unions without any reference to their originating skills, traditions, values and purposes.

The teaching and education trade unions are now making the same mistake as was made by Unison, Unite and the GMB: mergers and takeovers, one size fits all, which will obliterate identity and promote trade unionism as a business.

Business unionism aims to maximise income and pursues splinterist divisive in promoting diversity and equality. This approach does not create unity but panders to every fad of the moment as an excuse not to address the fundamental flaws in thinking and organisation.

Every union promotes itself as an organising union. Yet in practice they operate as pseudo-insurance companies servicing individualism.

And what is going on in these three general unions? Unison is paralysed by internal ultra-left destructive attacks on the union structure spearheaded via the Certification Officer, with attempts to hijack member subscriptions for no other purpose than to split and divide the union.

Unite is about to launch itself on a similar destructive mission as the union structure is challenged by the losers in the recent general secretary election. The declining GMB, predator as ever, tries to poach members at every opportunity, ludicrously trying to present itself as the diverse union of steelworkers, British Airways staff, and Ford workers at Dagenham.

All these displacement activities are hidden behind ever larger flags and balloons on demonstrations but membership continues to decline. None of these actions addresses the central danger facing trade unionism – there is a lot of fiddling going on while Rome burns.

‘None of these actions addresses the central danger facing trade unionism.’

Organisation exists in name only if at all in large swathes of manufacturing industry and in the traditional base of Unite and its predecessor unions. At the same time, though, strong trade unionism has flourished in the RMT and Unite in privatised rail and bus companies. And why? Because workers there have been willing to fight for their jobs, wages, terms and conditions, and have not hidden behind “partnership working” and the magnanimous goodwill of the employers.

In the public sector unions there has been a generally flawed and failed attempt to retain union membership once outsourcing has occurred. There appears to be a paralysis of mind and action, and an inability to organise among groups of workers. The concentration on outsourced security, catering and cleaning support functions ignores wholesale transfers of highly skilled sections of workers because To the do-gooders it is easier to rescue those seen as the dispossessed and downtrodden.

The irony is that it was in the private sector of the economy that trade unionism blossomed originally – the public sector in Victorian times was tiny. Trade unionism grew through necessity, struggle and sacrifice. It grew through workers organising for themselves, not expecting someone else to do it for them, through identity and common goals. And from workers who organised without expectation of expenses, promotion, self-advancement or reward.

Unison has just elected its National Executive Council on an average 4.7 per cent turnout. For whom do the executive council members speak?

If the trade unions are going to have a renaissance in the 21st century then they need to address the core and uniting issue of class, not the separateness of race, gender, disability and 101 other divisions. They need to address the fact that union membership has a casualty rate. The employers and their government want a union-free workplace. To be a leader in the workplace targets you to be sacked, bought and sold.

The meaning of unity

While there are more workers than ever in Britain’s history there is an inability to recruit them. There has to be a renewed understanding of what unity means, not the tribalism of competing trade unions to the employers’ advantage. The TUC anti-poaching Bridlington Agreement stood the unions in good stead for over 50 years before being outlawed by Thatcher. The basic principle that unions should work together as working class organs needs to be reasserted.

‘Unions grew through workers organising for themselves’

There has to be a renewed understanding of why work brings workers together – in defence of skill, in collectivism, in identity, in unity, in strength.

The time-serving parasitic structures and so-called democracy of many trade union branches, regions, districts and executives are a terrible parody, divorced from what they were created to do.

The Trade Union Act 2016 will cut through all of this, especially the functioning of trade unions around facility time off, collection of subscriptions and industrial action. There will have to be a ruthless, root-and-branch refreshing to ensure that basic workplace organisation is fit for purpose – because at present much isn’t.

The challenge is not about structures or magic wands to encourage participation and identity but to revive the thinking and understanding – that we need class organisation to be able to assert ourselves as a working class.