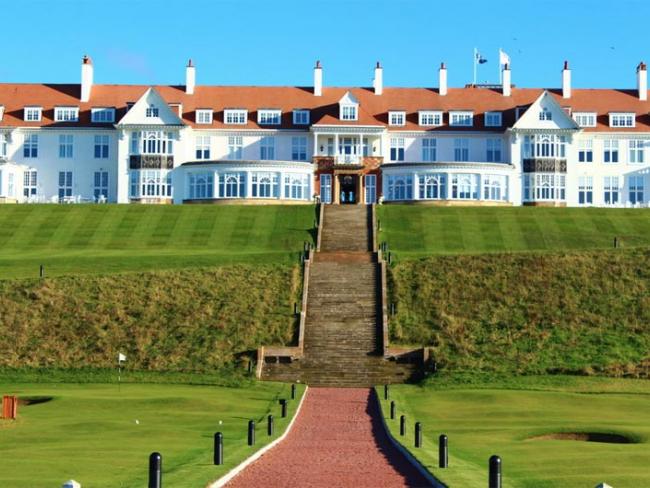 Although Unite represents most workers in the job-threatened hospitality industry, there is a legacy of the RMT organising in the former railway hotels. One is now the focus of its attention – the Trump Turnberry golfing hotel on the Ayrshire coast in southwest Scotland.

The Trump Organization treats it like a flagship resort. But it is treating the workers there abysmally, with widespread job cuts and large reductions to wages, conditions, staff benefits and sick pay.

Launching its campaign, the RMT said, “It has become clear during the consultation that the Trump Organization has been hoovering up British taxpayers' money in furlough payments, whilst plotting to axe large numbers of those very same staff, at odds with the Government's objectives for the job retention scheme.”

This iconic hotel was built in 1906 as a 5-star resort and re-opened in 1951 after military use during the Second World War. Acquired by the Trump Organization in 2014 at a cost of over $60 million, investments there have been around $200 million and the Pentagon is reported to have spent around $200,000 there since 2017.

Donald Trump himself resigned his directorship in advance of assuming the presidency of the USA in 2017, but already had caused controversy with his building of a similar resort at Menie on the Aberdeenshire coast. This has resulted in the stretch of rare sand dunes there losing their status as a Site of Special Scientific Interest (SSSI).

That scheme, with its unfulfilled promises of a £1 billion investment and 8,000 jobs, had been pushed through by Alex Salmond and his Scottish administration in 2007 when relations between Salmond and Trump were rosy. In the past year there have been protests and petitions calling on Aberdeenshire Council to apologise for its role in the debacle.

Mick Cash, RMT General Secretary, has now written a strongly worded letter to Nicola Sturgeon, the current Scottish First Minister, calling for an urgent condemnation of the cuts and urging intervention. With the background of growing numbers now holidaying within the UK, he accused the Trump Organization of “shamelessly using the global pandemic as a guise for slashing terms and conditions of workers in Scotland”.

All of this is the tip of an iceberg, with up to 100,000 hospitality jobs in Scotland threatened at such well known chains as MacDonald Hotels, Apex Hotels, Marriott, InterContinental Hotels Group, and resorts such as Auchrannie, Aviemore and Crieff Hydro. The unions Unite and GMB are pursuing this wider struggle.

• An RMT petition to stop the cuts can be found at www.megaphone.org.uk/petitions/stop-the-job-cuts-at-trump-turnberry