Skip to main content
Home » News/Views » TUC: drifting away from the working class

TUC: drifting away from the working class 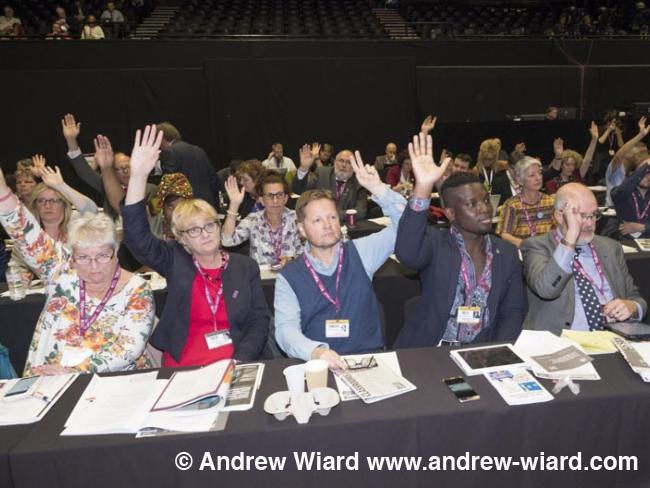 All those in favour? Delegates at last year’s TUC Congress, held in Brighton. Photo  Andrew Wiard/www.andrew-wiard.com.

The TUC claims on its website to have “established itself as the voice of trade unions in the UK”. While this may be true, a glance at the agenda for Congress confirms that the TUC seems to be more distant from the class that it ostensibly exists to represent than at any time in its 150-year history.

The TUC and the majority of its affiliated unions are at odds with the views of the working class over Brexit, and that is reflected in the motions tabled for this year’s Congress. Ignoring the clear will of the people, the TUC and most trade unions continue to cling to the notion that leaving the EU is a “bad thing”.

The Communication Workers Union’s motion repeats the oft-used mealy-mouthed phrase about “respecting the referendum result”. Yet it continues to peddle the line that workers’ interests can only be served by committing Britain to a customs union with the EU and remaining in the single market, a position which effectively negates the decision it claims to respect. Its underlying position is given away in the motion, which also seeks a “reform of the EU” to “promote the interests of workers across Europe”.

Unite’s motion on Brexit is straight out of “Project Fear”, with the heading “Avoiding a Cliff Edge Brexit”. Pandering to big business interests to exaggerate the economic effects (on big business) of leaving the EU, the motion calls for mobilisation against anything that looks like a clean break, and tentatively supports a second referendum being held, presumably in the hope that the original decision could be reversed.

The motion from the Royal College of Midwives continues in much the same vein. Its focus is on the false assertion that workers’ rights will be worsened by leaving the EU, ignoring the fact that much of existing employment legislation has not emanated from EU Directives, and much of what has been transposed into British law has been improved upon here.

‘Unite’s motion on Brexit is straight out of “Project Fear”.’

Then there is the motion from the TSSA transport union, one that has effectively sold its soul to the EU. The union’s General Secretary Manuel Cortes has been touring the country calling for the Brexit decision to be reversed, accusing trade unionists in favour of Brexit of class collaboration. The motion tabled at the TUC is of course less strident in its content to make it more palatable to those less enthusiastic about the EU, but it unashamedly also calls for a second referendum.

The irony is that Cortes is President of the Greece Solidarity Campaign, and he should know full well the extent to which the EU has compromised the sovereignty of Greece, intervened against collective bargaining, reduced the role of unions in setting the minimum wage, and forced a reduction in the minimum wage itself. Yet the experience of Greece has failed to dent Cortes’s enthusiasm for the EU.

While Cortes and Unite General Secretary Len McCluskey, supposedly politically close to Corbyn, take a pro-EU stance, the extent of the confusion in the Labour Party is underlined by Corbyn’s apparent strengthening of the line that Brexit is a done deal. He recently visited the Bombardier railway train manufacturing plant in Derby to urge taking full advantage of Brexit to provide state aid to manufacturing, and nationalise key services such as the railways and water – none of which is possible while Britain remains in the EU.

Aside from Brexit, one might have expected the Congress agenda to address the woeful state of trade unionism in Britain. Statistics published this May for 2017 show that union membership increased in the private sector by 70,000 – but tellingly only by 19,000  overall due to the loss of 51,000 members in the public sector.

But set against rising (recorded) numbers in employment, it represents a fall in the proportion of workers in unions. And this follows the previous year’s dramatic overall fall in union membership.

But you would search in vain for any motions from trade unions that advance real solutions to this state of affairs. The TUC Young Workers Conference has at least submitted a motion which calls upon unions to raise the profile of young workers and young trade unionists through recruitment, organising and campaigning work, pointing out that while workers under the age of 25 make up 14 per cent of the workforce, only 4.7 per cent are members of trade unions. Failure to address these uncomfortable facts will mean extinction for many unions in the next few years.

The “mega-unions” like Unite and Unison have grown more and more remote from the everyday experiences of the members in the workplace as they have increased in size through mergers rather than recruitment. They, and a good many other unions, now have overblown bureaucracies that are focused more on the machinations of the Labour Party than building stronger organisation.

The unions in general are failing to tackle the real issues of poverty pay and zero hours contracts faced by large numbers of workers in areas where trade unions are nowhere to be seen. And in areas, particularly in the public sector, where workers are covered by collective bargaining and represent (or should represent) the organised core of the unions, the actual union organisation is rapidly becoming a mere shell, hollowed out by mass desertions of workers who no longer see union membership as a collective tool to fight for better pay and conditions.

Twenty years ago, the TUC was at least talking about organising and recruitment, even if it was somewhat half-hearted. It had launched the New Unionism initiative along with the Organising Academy, and talked about building power in the workplace. A look at the Congress agenda would reveal that unions seem to have put that in the “too difficult” box, and the TUC has returned to its old approach of debating a list of asks from the next Labour Government, coupled of course with a blind faith that if that doesn’t work, the EU will provide.

The remains of the steelworkers and knitwear unions, now a shrunken shadow of an organisation named Community, has tabled a motion on automation, an area that will be a massive challenge for unions and workers over the next decade. It identifies the problem, but is very short on solutions. It concludes by asking the General Council to “explore what government policy change is required to ensure workers can realise the benefits of automation and prosper in a rapidly changing advanced economy”.

It is not government policy that needs to change, nor even the government that needs to change. The capitalist system itself must be changed if we are to avoid technology and automation being used to destroy more and more jobs, while wages continue to be driven down. Leaving the EU will be a good first step in challenging that system.

Community’s other motion is entitled “Save Our Steel”. Confused about why the steel industry is suffering through global overcapacity, it condemns the US for its recent imposition of tariffs designed to protect the US steel industry, without drawing the logical conclusion that this is perhaps a means by which Britain may protect its steel industry. There is more than enough demand within Britain for the steel produced in the country. But membership of the EU means that we currently have no power to take any real steps to protect British steel.

The RMT union’s motion refers to the collapse of Carillion, the failure of the Virgin/Stagecoach East Coast franchise, and the recent timetable fiasco, and calls for renationalisation of the railways. But it fails to note this will be impossible while Britain remains in the EU, surprising perhaps given the fact that the union has a policy supporting Brexit.

Interestingly, not one of the few unions in favour of Brexit has tabled a motion on the subject, or referred to their position in their motions. The suspicion is that their leaderships, from whom precious little has been heard on the subject since the referendum, are at odds with their unions’ policy position. So don’t expect anything other than a very one-sided debate on Brexit at Congress!