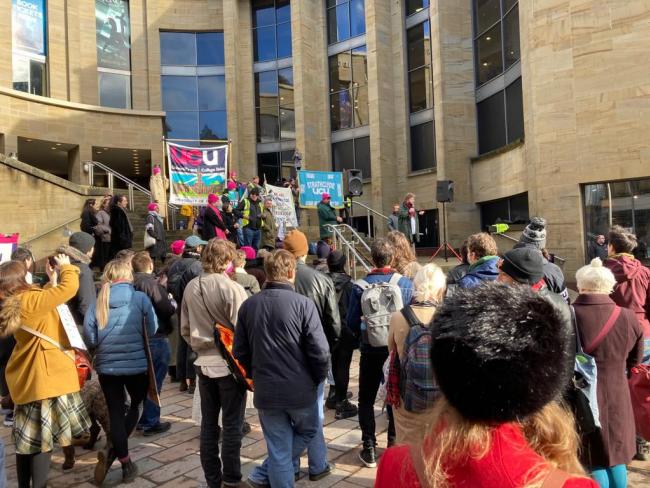 Despite their praise for the herculean efforts of staff throughout the pandemic, university leaders are ploughing ahead with devastating cuts to pensions and the continuing deterioration of workers’ pay and working conditions

Staff at 44 universities are on strike this week after university employers refused to withdraw cuts to the Universities Superannuation Scheme (USS) or accept the University and College Union's (UCU) compromise proposals which would have seen staff and employers both pay slightly more to protect benefits and resolve the pension dispute.

Despite the USS confirming  that the UCU’s proposals are viable and implementable, the employers’ organisation Universities UK (UUK) have said it will formalise its own proposals on Tuesday 22 February. These are expected to result in a 35 per cent cut in the guaranteed retirement income of members.

On Monday 21 February strike action over pay and working conditions will also start with 24 further universities joining the action, bringing the overall total to 68 universities.

The dispute is over a 20 per cent pay cut in real terms over the past 12 years, unmanageable workloads, pay inequality and the use of exploitative and insecure contracts, which are rife across the sector. Altogether, more than 50,000 staff are expected to walk out, with well over a million students set to be impacted.

The full strike dates, with numbers of institutions involved, are:

The final day of strike action in week three has been called to coincide with the student strike on Wednesday 2 March, organised by the National Union of Students. The students are supporting UCU's industrial action and their union is calling for better working conditions, pay and pensions for staff.

The action re-started last December, having been interrupted by Covid in March 2020, when staff at 58 universities took three days of strike action. Following a successful reballot over Christmas, staff at ten more universities will join this latest wave of strikes. Since December, staff have been engaged in action short of a strike (ASOS), which involves working strictly to contract, not covering for absent colleagues, not rescheduling lectures or classes cancelled due to strike action, or undertaking any voluntary activities.

In retaliation to the wave of action, employer representatives have authorised  withholding the pay of staff taking ASOS. Six universities are claiming they will deduct a full day’s pay for each day of action short of a strike . The UCU has warned that this may lead to even more strikes being called.

To resolve the pension dispute the UCU is demanding employers revoke the cuts to staff pensions and formally accept the union’s compromise proposals. On pay and working conditions, the UCU is demanding a £2,500 pay increase for all staff, as well as action to tackle unmanageable workloads, pay inequality and the use of insecure and exploitative contracts.

The union said universities can more than afford to meet the demands of staff. University finance figures, from 2019/20, show total income across the sector was £41.9 billion, with reserves of £46.8 billion.

On Tuesday 13 February, UCU general secretary Jo Grady said: “The action that…will eventually hit 68 universities is down to vice-chancellors who have failed staff and students. They have pushed through brutal pension cuts and done nothing to address falling pay, pay inequality, the rampant use of insecure contracts and unmanageable workloads.

“It is outrageous that when they should be trying to resolve this dispute, employer representatives have instead been finding new ways to deduct pay from university workers. Rather than punishing their workforce, these so-called leaders need to look in the mirror and ask why students support staff taking strike action and why their own workforce is so demoralised.

“Throughout these disputes, our union has offered simple solutions that would avert industrial action and benefit the sector in the long-term, but time and again employers have chosen to continue pushing staff to breaking point, while the sector continues to bring in tens of billions of pounds each year. To avoid this period of industrial action all vice-chancellors had to do was accept UCU’s viable pension proposals and take action over worsening pay and working conditions. That they didn’t is an abject failure of their leadership.

"Students are standing by our members because they know university staff are overworked and underpaid. And they know that this sector, which is awash with money, can afford to treat its workers with dignity. As ten days of action begins today vice-chancellors urgently need to get around the table and help UCU resolve these disputes.”