Unions call for ‘Jones Act’ to save jobs and industry 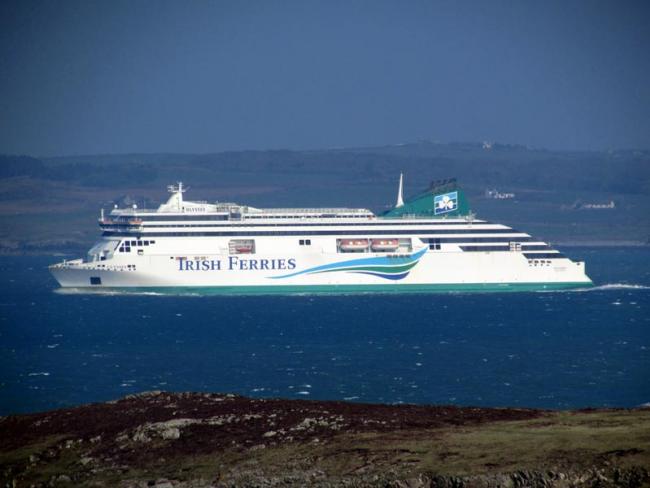 The MV Ulysses leaving Holyhead, bound for Dublin. The ship is flagged out to Cyprus, and Irish Ferries employs Latvian ratings on it on wages of just €5.15 an hour – such exploitation, says the seafarers union RMT, is not unusual. Photo Reading Tom (CC BY 2.0).

Since the general election two trade unions have been renewing calls for more employment for British seafarers on British ships, especially those engaged in the coastal trade and across the English and Irish Channels.

The calls crystallise around the idea that Britain needs an equivalent of the US Jones Act, introduced in 1920, in the aftermath of the First World War. The war had reminded people how important a merchant fleet was to a country largely dependent on goods coming in via ports, rather than land crossings.

The Jones Act specifies that all coastal trade in the US – known as “cabotage” –including from the continental states to Hawaii, must be conducted on ships that are owned by US citizens, US-flagged, built in the US and 75 per cent crewed by US citizens or people with permanent residence.

And it goes even further. At least 90 per cent of the steel used in repairs made on American ships must be made with American steel, which essentially means that all ship repair has to be carried out in US ports.

Known formally as the Merchant Marine Act, it celebrates its 100th anniversary on 5 June this year. But it is under attack, and has been for much of its life. The US’s “free traders” hate it. So too do non-US shipping companies, eager for a slice of the US market. And so too does the EU.

Back in Britain, unions like the RMT and Nautilus International look longingly at the Jones Act. The RMT’s SOS 2020 campaign, for example, is calling explicitly for “cabotage” protection for UK crew and ships “based on the Jones Act”. The demand has featured in demonstrations around the country from Hull to Liverpool and Cardiff.

A petition was set up last year calling for a British Jones Act, gathering several thousand signatures, but it closed early because of the general election.

Inside the EU, of course, such a law would immediately be overturned by the European Court of Justice, running counter as it does to the hallowed notion that any company in the EU is free to set up and operate anywhere within the bloc.

The ECJ even ruled in the Factortame case (see page 15) that Britain could not require 75 per cent of the owners of a British-registered vessel to be British citizens, overturning a key element of the Merchant Shipping Act of 1988. (That decision also established the supremacy of EU law over UK law.) But now we have left the EU, and the time is ripe to consider what serves our interests best.

It’s the kind of idea that you might think would find some favour with the new government. Think again. Far from supporting the idea of a UK version of the Jones Act, prime minister Boris Johnson wants the US to ditch its own legislation.

The point came up when Johnson and US president Donald Trump held a working breakfast in Biarritz, France, at the G7 summit in August last year.

Trump said that Britain’s leaving the EU was like removing an anchor from around its legs. Johnson replied, “Talking of the anchor – talking of the anchor, Donald, what we want is for our ships to be able to take freight, say, from New York to Boston, which at the moment they can’t do. So, we want cabotage. How about that?”

Trump was evasive. “Many things – many things we’re talking about,” he burbled. But Johnson should consider that he was travelling a route well trodden by Brussels: the EU used talks about its proposed TTIP free trade agreement to call on the US to abandon the Jones Act.

Trade unions that understand the issue think differently. Speaking in Brussels in 2017 during European Shipping Week, Nautilus International general secretary Mark Dickinson hit the nail on the head: “Instead of attacking the Jones Act, we should emulate it and understand the strategic economic and defence drivers that have ensured the Act’s survival for almost 100 years.”

So when Johnson says “we” want entry into US cabotage, who does he mean by “we”? Not unemployed and underemployed British seafarers for sure. Let’s start at home.

The RMT made the point about employment forcibly when it protested outside the National Assembly for Wales in Cardiff on 9 January this year. While seafarers add millions to the Welsh economy each year, local workers “cannot always compete for this work due to legal loopholes that allow anti-trade union companies like Irish Ferries to crew their ships with seafarers from outside Wales, the UK and Ireland on contracts that pay below the minimum wage for months at sea”.

It gave the example of Latvian ratings on Irish Ferries’ MV Ulysses – which flies the Cypriot flag! – being paid a basic €5.51 per hour on the Holyhead-Dublin route in 2018. This exploitation of crew is “all too common”, it said, and undermines industry standards set by RMT collective bargaining agreements.

The RMT points to P&O’s “shameful” use of ratings from Portugal and Latvia on its services out of Hull, for example, as well as below minimum wage contracts on the Condor Ferries out of Portsmouth that provide a lifeline to Guernsey and Jersey.

The SOS 2020 campaign was launched in October 2016 with the message that by 2020, with an ageing workforce, thousands of seafarers would be retiring. It is calling for:

• Cabotage protections for UK crew and ships based on the Jones Act;

• Protection of the Royal Fleet Auxiliary’s Merchant Seafarers from privatisation.

2020 is now upon us, and government action has been conspicuously absent. Nautilus International assistant general secretary Ronnie Cunningham told last September’s TUC Congress that two years previously the government had announced a target of doubling the number of ships on the UK Register of Shipping – but tonnage on the register actually dropped by a third.

‘2020 is now upon us, and government action has been conspicuously absent…’

“It doesn’t stop there,” Cunningham continued. “Government and ship owners committed to increasing Merchant Navy cadet numbers by 400 per year but have fallen short of this with only 50 being taken on in the last 12 months.” A mere 12.5 per cent of the target.

Cunningham hit out at the obsession with trade at the expense of employment. “The government has forgotten that 95 per cent of trade comes and goes by sea,” he said. “I have lost count of the number of times government ministers have told us we will ‘trade our way’ out of the downturn or that trade deals will be our salvation in a post-Brexit economy.”

During the general election, Nautilus International issued a Manifesto for Shipping, calling on whoever formed the new government to invest in training British seafarers and, among other things, “Enhance the employment of British seafarers, especially in coastal shipping; passenger and freight ferry services (domestic and intra-European); the offshore renewables sector; and in offshore oil and gas exploration and decommissioning.”

But Westminster has long forgotten about British seafaring. The Labour Party in its 105-page manifesto for the election did not mention shipping, or ferries, or cabotage. Not a word. It was an omission that spoke volumes about its pretensions to speak for Britain. Likewise the Conservative manifesto made great play about plans for “freeports” and “free trade” but avoided even a single reference to shipping.

So there is a hard road ahead. But the workers in the industry have made a start on defining their own strategy. Those in other industries should do likewise. We didn’t vote to bring control back from Brussels only to hand it to the global free traders.