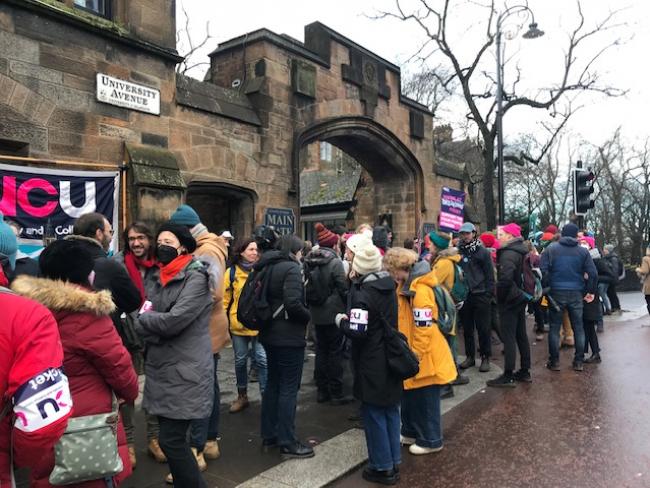 The dispute over pay and conditions continues with further strikes by University and College Union (UCU) members at 63 universities over three days from 28 February to 2 March as well as other action short of a strike.

The National Union of Student, which supports their academic staff, is holding its own strike for education on 2 March – under the banner "Walk Out; Teach In".

The proposals by the University and College Union (UCU) to secure the Universities Superannuation Scheme (USS) are eminently reasonable to anyone wanting to preserve collective pension arrangements. But such collective thinking is anathema to capitalism – rejection by the employers is no surprise.

Among university workers this move is widely accepted as a blatant and politically motivated attack by their employers. The gloves are now off in this dispute.

And it’s getting personal. Individual university vice chancellors are being called to account for their treachery by their employees. VCs are the equivalent of board of management chairs or CEOs in the private sector; they have now shown their true colours.

The UCU branch committee at the University of Glasgow (UoG) is in no doubt that the university could afford the requested increase for the staff pension. Its return to the Scottish Charity Regulator showed a surplus of almost £70 million in 2020.

But under the leadership of vice chancellor Anton Muscatelli, the Glasgow senior management team have chosen to spend the money elsewhere. That includes their own exorbitant salaries and new buildings where staff are expected to work on lower salaries, under worse working conditions and with vastly worse pensions.

UCU Glasgow members are furious about the failure of these individuals even to explicitly address the key issues in the UCU proposal. The union says this: “demonstrates their total disregard” for staff.

Muscatelli’s role is wider than his own university. He is also a trustee on the USS board. Glasgow union members are is incensed at his hypocrisy. They point out that as an important figure in Scottish public life he “has publicly espoused his views on economic justice, fair work, and conditions of service.” But not for his own workers apparently.

His reputation is called into question by his reprehensible behaviour in voting against the proposals. The union says, “it is clear from UUK’s current plans to decimate our pension scheme with the acquiescence of USS that his role in USS serves no benefit to us”.

The UoG union members’ reaction to their VC’s behaviour is clear and unequivocal, “…this evidence-free and dangerous response to the USS consultation is a call for us to recalibrate our relationship with management. We will not be part of a performative partnership. We demand respect for our labour, our voice…Spending our salaries on new buildings is not a way to advance education, it’s a way to destroy an institution that has stood for well over 500 years”.

And there’s more, “Despite all the pretty words used in the horrendously expensive marketing output of UoG, theirs is a business model that extracts, exploits, and redirects the value we generate as teachers, administrators and researchers into bloated management salaries and vanity estate projects that have no room for us. This is a model that has no space for either accountability or transparency. In exchange for their empty promises, this is a management that expects us to be grateful for pensioner poverty, precarity, despair, fear, impotence, and the loss of our academic collegiality and freedoms.”

“We must stand up and push back against these bullies!”

“We must stand up and push back against these bullies! We did it in 2018, we can do this now…We are the university. Despite (management’s) dishonesty and obfuscation, we will continue to do the right thing and that involves making management work for us not the other way around…This week and next week, on the picket lines and elsewhere, let us spell out the truth to our colleagues on precarious contracts, our colleagues who face discrimination in the internal and external labour market, our students, our sister unions – that there is another world we stand up for: a better, more compassionate world of truth, dignity, and respect”.