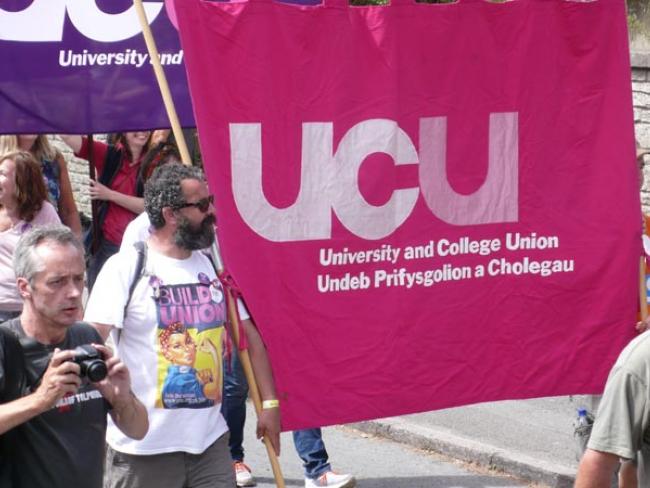 Academics marching under the University and College Union banner at last year’s Tolpuddle Festival in Dorset.

Strike action will begin in universities across Britain next month as academic staff fight back against the plan by the university employers association, Universities UK to close their final salary pension scheme.

Nearly 40,000 academic staff in 61 universities will be involved following large majorities for action in a national ballot. Overall 88 per cent of union members voting in the University and College Union ballot supported action to stop the changes.

Nationally the turnout was 58 per cent, with 61 of the 68 universities balloted smashing the 50 per cent criterion established by the new Trade Union Act. Seven universities failed to reach a turnout of 50 per cent, mostly narrowly, and they are banned from taking action despite huge majorities in favour.

At the University of Birmingham, for example, 446 of the 495 votes (90.1 per cent) were for action of some kind, but these votes counted for nothing as the turnout was – by just 21 votes – short of the 50 per cent mark.

‘Such nonsense has time and time again been used as a pretext for pension scheme closure.’

The employers’ calculation is based on a spot price fix geared to one day in March 2017. On that one mechanical assumption, they have said that in 20 years’ time or whatever there will be insufficient funds to pay pensions.

This regulation rests on an almost religious belief in the perfection of “free markets” and a rejection of long-term economic trends. It is no exaggeration to say that the basis of EU pensions regulation as a weapon for closure is among the most “neoliberal” in the economy – Thatcher’s dream.

Britain has far and away the largest final salary pension assets in the EU, and here is yet another example of the British regulatory parasite running to Brussels and liaising with the EU, via the EIOPA, to come up with a rigged regulatory wheeze designed for closure.

It is no coincidence that the attack on university pensions is taking place during the run-up to when we legally leave the EU in March 2019. As the power of the EU and its British representatives drain from our soil, they will become increasingly desperate by lashing out from their bunker. It is a matter of remaining resolute, identifying the enemy and removing it. The USS workers are about to become part of that struggle.

Following the ballot result the UCU says university staff will start strike action on 22 and 23 February and embark on three-, four- and five-day actions in subsequent weeks.