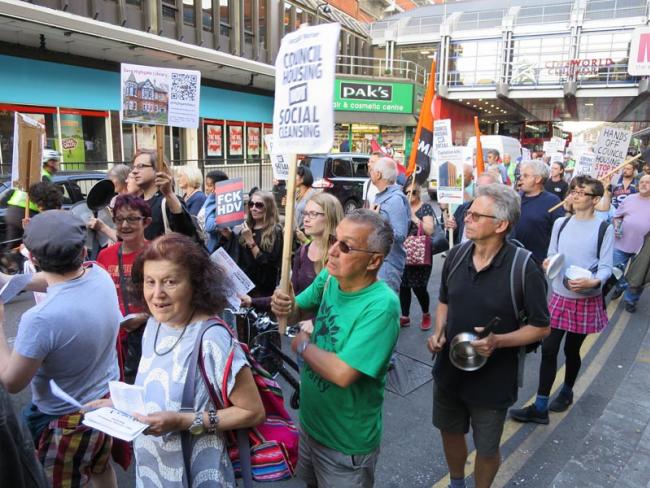 No amount of “help” for first-time home buyers in the shape of reducing stamp duty can hide the fact that home ownership is plummeting, especially among young people. Figures released earlier this year show that the proportion of 25- to 34-year-olds living in rented accommodation has leapt from 24 per cent to 46 per cent.

And increasingly, those young people are being forced into private rented accommodation as the number of council properties available for rent is declines – the result of councils in collusion with developers evicting local people as they “regenerate” huge swathes of (particularly) London for profit.

A case going through the High Court about evictions in Haringey, north London, at present demonstrates how previous regeneration schemes have merely been a curtain raiser for the demolition of much of council-owned Haringey, with ramifications for social housing far beyond the borough.

The “Stop HDV” campaign bringing the case is aimed at stopping the Haringey Development Vehicle, a Limited Liability Partnership half council-owned and half by Australian multinational Lendlease. Such organisations are shrouded in secrecy, having their origins often in MIPIM, the annual gathering of developers and housing officials in Cannes on the French Riviera, where participants discuss their “share of the proceeds” like thieves gloating over their haul.

The campaign cites lack of consultation and loss of democratic control over homes and other public assets. It appears that strategic decisions on the future of Haringey, including risk to the public purse, viability assessments, and due diligence, were not taken by the full council. When the council called a halt, the council leader insisted on going ahead, committing the borough to transfer £2 billion of public property for demolition in exchange for £45 million in private investment.

As a commercial partner Lendlease is exempted from certain aspects of council policy, meaning that security of tenure will no longer apply.

Campaigners are asserting their fundamental right to a home and support of the Community. The future of 250,000 people is at stake. Additionally, over 9,000 households in Haringey are waiting for a council flat, with over 3,000 in temporary accommodation. The HDV promise is for only 40 per cent of the housing to be “affordable” (itself a meaningless term).

It is no coincidence that the land in question adjoins CrossRail and other City of London developments. The working class simply can’t be allowed to remain in the way of the rich getting richer.