Welsh seafarers call for jobs, training and a future 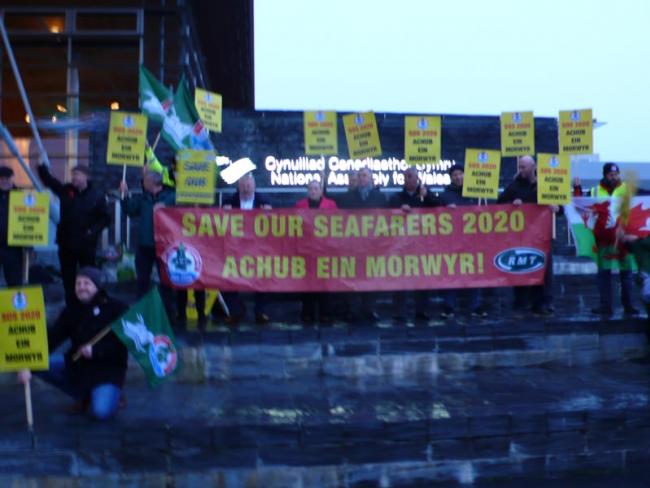 Maritime and transport union RMT held a demonstration outside the Welsh Parliament on Thursday 9 January on a dark, cold and wet evening as part of SOS 2020, its campaign for the future of British seafaring. The demonstration was also part of its fight for policies that will increase seafarer and docker jobs in Wales.

“Hundreds of RMT members in Wales run ferry services essential to the Welsh economy, but local seafarers are being undermined by the industry’s flouting of employment rights and refusal to seriously invest in training,” said RMT general secretary Mick Cash.

Irish Ferries is typical of other shipping employers in paying EU seafarers below £5 per hour. In addition, there are nearly 58,000 ratings from non-EEA countries employed on ships working for UK ports. Most are paid well below the national minimum wage.

Cash also called on the Welsh government to do more to impress upon the shipping industry the need to improve seafarers’ rights, including entitlement to the living wage for Wales.

An RMT campaign leaflet notes that across Britain more than 101,000 ratings and officers make our shipping industry run, yet fewer than 20 per cent of these jobs are held by British seafarers, most of whom will retire in the next decade.

For a major island nation, reliant on shipping to transport 95 per cent of traded goods, and over 60 million passengers every year, allowing shipowners to continue to exploit seafarers would be economically short-sighted and strategically dangerous.

The RMT is calling for equal rights in employment, equality and immigration law for UK seafarers. It also wants “cabotage” protections for UK crew and ships based on the USA’s Jones Act, which mandates that all shipping between US ports be carried out in ships crewed and owned by US citizens.

The union is also demanding statutory targets to train thousands of UK ratings, higher safety standards in UK shipping and protection from privatisation for the Royal Fleet Auxiliary’s merchant seafarers.