Skip to main content
Home » News/Views » Who voted to hand over the army to the EU?

Who voted to hand over the army to the EU? 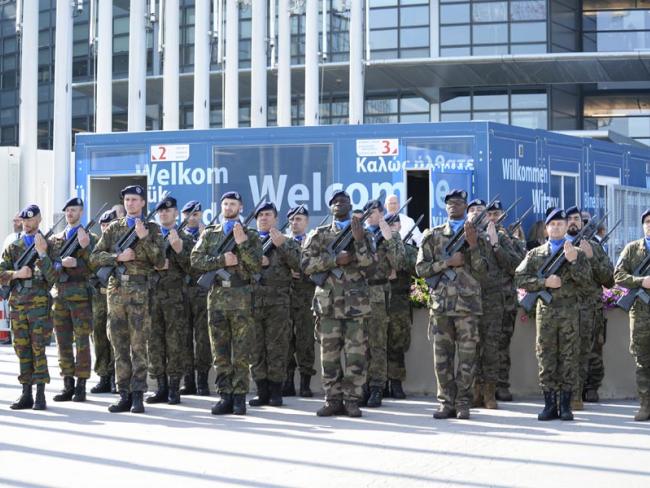 10 July 2018: a nice welcome to the European Parliament in Strasbourg, courtesy of the Eurocorps. Michel Christen/European Union 2018 – EP.

Without the scrutiny of Parliament, and with scarcely anyone noticing, we are losing our sovereignty over defence, with its implications for foreign policy as well. It demonstrates the government’s traitorous contempt for the referendum vote to regain sovereignty and control of our resources.

Five days after the vote to leave, the EU sent a secret paper to EU ambassadors about its Global Strategy. The paper laid out the groundwork for the EU’s ambition to centralise defence and security policy, leading to an EU army.

They all mean that we will continue to pay vast annual sums to the EU, and they all give away control over key parts of our defence and foreign policy.

Ministers have agreed to every one of the steps towards military union taken by the six EU Councils since we instructed the government to leave the EU. The government has moved far faster to bind us into the EU defence acquis (that is, the accumulated legislation, legal acts, and court decisions which constitute the body of European Union law on defence) than it has ever moved to get us out of the EU.

In October 2016 the May government instructed senior officials in the Cabinet Office, the Foreign Office and the Ministry of Defence, to lock us into the emerging European Defence Union. This is on the lines of the 1952 Pleven Plan to create a European Defence Community with EEC members all sharing a unified defence budget, equipment and personnel. The then Prime Minister Winston Churchill rejected that scheme.

‘By late 2017, the EU was starting to come out into the open about its military plans.’

On 22 June 2017, Theresa May attended the European Council where she approved the European Defence Fund, the European Defence Industrial Development Programme, and Permanent Structured Cooperation (PESCO). The Council also agreed that the deployment of EU Battlegroups should be borne as a common cost on a permanent basis. May, representing a country which had voted to leave the EU, approved this too. In her statement to Parliament the following week she failed to mention defence at all, despite its place as the top item on the agenda at the EU Summit.

The EU’s de facto Foreign and Defence Secretary, Federica Mogherini, said in June 2017 that it had once been deemed impossible to have a first Command Centre in Brussels for EU military and training missions or that it would take them years, even decades to do it. “It took us a few weeks. And we decided it together, still at 28, and we did it.” So, May signed us up to that too, without telling anyone.

By late 2017, the EU was starting to come out into the open about its military plans. In September 2017 President Juncker said, “By 2025 we need a fully-fledged European Defence Union.”

In February 2018, Alastair Brockbank, the Cabinet Office Europe Unit’s Defence Adviser, advocated a Framework Partnership Agreement with the EU, a binding commitment to EU defence policy, structures and rulebook. He proposed having UK people in Brussels but also perhaps European External Action Service staff in UK ministries. So he told the EU we would sign up to its Common Defence Policy, while the May government said publicly that we would not be part of it.

The Cabinet Office has proposed a defence Treaty with the EU, to be concluded before the end of the proposed transition period, “to bring things forward as soon as possible”, an urgency noticeably lacking in moves towards leaving the EU.

Being part of any aspect of the EU’s military union requires being part of EU foreign policy expressed in its External Action Service Global Plan. In the EU, everything is linked to everything else.

The government’s Technical Note on External Security of 24 May 2018 said, “The UK welcomes the agreement that future arrangements on CSFP [Common Security and Foreign Policy] and CSDP [Common Security and Defence Policy] could become effective during the Implementation Period.” This would lock us into the EU’s common foreign policy and defence policy and into the whole EU defence acquis.

May’s proposed Withdrawal Treaty has a section on defence, just half a page of A4, all about us paying the EU. After “leaving” on 29 March 2019, Britain will continue to pay for the European Defence Agency, the European Union Institute for Security Studies, and the European Union Satellite Centre, as well as to the costs of Common Security and Defence Policy operations.

By late 2018, the EU was open about its military plans. Bruno Le Maire, France’s finance minister, urged the German government to turn the EU into a sovereign power on the world stage. He said, “This is the struggle of a generation … Europe needs to become a kind of empire like China and the USA … Europe should no longer shy away from displaying its power and being an empire of peace.” (13 November 2018.) Yet this “empire of peace” was creating its own army.

‘This is the opposite of taking back control.’

French President Emmanuel Macron said that Europeans cannot be protected without a “true European army” and Chancellor Merkel backed the scheme. On 13 November she said, “We have to work on a vision of one day creating a real, true European army.” She said it should involve a common arms industry and a “European intervention force” and that the rule of unanimity for such decisions needed to be changed so that a majority would suffice.

So, the denials by pro-EU campaigners like Blair and Clegg during the referendum were, to say the least, misleading. As far back as 2003 Blair denied there was even the concept of an EU army.

In the run-up to the referendum, Lord Ashdown said the idea was “nonsense” – “for the birds”. Nick Clegg, who has now shown his commitment to Britain by taking a well paid PR job in California, said, “the idea we’re going to have a European air force, a European army is simply not true.”

And now people like Lord Hague continue the lies. He claimed on 27 November that May’s deal ensures that “we are not expected to be a part of” more EU centralisation, including in the military context.

Major General Julian Thompson, Chairman of Veterans for Britain, has clearly refuted all that. In a letter to the Daily Telegraph on 29 November he said, “The political declaration on the future relationship states that the UK will remain in the EU’s Defence Fund, among a range of other defence industrial structures, to the extent possible under EU law. As Norway has found, and the Cabinet Office has admitted, this means that the UK will remain under the authority of the EU’s foreign policy and its rapidly growing defence policy. When these defence industrial structures kick in over the next few years, they will also be accompanied by a requirement to place funds and decision-making under EU authority. This is the opposite of taking back control.”

“The exit agreement of November 25 further sows the ground by keeping the UK under EU defence directives,” Thompson continued. “This is another prerequisite of these EU military merger schemes, which are unashamedly political and aimed at further integration.

“There are ways to achieve military and industrial co-operation with European states that do not involve the EU at all – for example, through bilateral agreement, as with the Anglo-Dutch arrangements for co-operation between their respective marine corps, in place since 1971.

“There are only two possible reasons for participating in these schemes: to sweeten the plainly failed attempt to win concessions in other areas, or to pave the way for re-entry to the EU. Either would disrespect the vote to leave the EU, and either would be a gross breach of the most basic contract between government and citizen.”

How will we be able to hold our politicians to account in future – for starting wars or lying about them, or even for failing to develop the right strategy in a war – when the EU, not they, will be in charge of defence? How much of our foreign policy will they be accountable for? We are quietly losing democratic control over yet another vital area of our public life.

Swiss break off EU negotiations
Nurses: stop the poaching!
Bouncing back: the return of British fruit
How the EU turned a vaccines crisis into a fiasco
Swiss face EU battle again